As it prepares to go all-electric by 2030, Volvo Cars has now shared with the world its plans to transition into the era of EVs, and outlined some ambitious targets. During its ‘Tech Moment’ virtual conference, Volvo didn’t just talk about a future product, but also shed light on its plans for vehicle software as well as battery development and targeted vehicle range. The announcements are significant, as they promise to considerably improve the overall experience of owning and living with an EV. The biggest highlight of Volvo’s EV presentation had to be that of its progress on the battery front. Collaborating with Swedish battery start-up Northvolt on lithium-ion battery tech, Volvo is aiming to cut EV charge times by half over the next four years, while also improving range figures. For perspective, the Volvo XC40 has a combined WLTP range of over 400 kilometres, and charging its 78 kWh battery to full with a three-phase, 16-amp wall charger currently takes eight hours.

Volvo will begin implementing these improvements with its first SUV to be based on an EV-only platform, which will be its new flagship model set to debut in 2022.

“It will be the new Volvo flagship SUV, but it’s really the first of its kind and will be followed by a lot of cars based on the same architecture,” said Volvo boss Hakan Samuelsson. “We will mark that by deviating from the normal way of giving our cars names with XC for an SUV and so on. To mark that this next generation kind this car will also have a name, like a child”, he added. 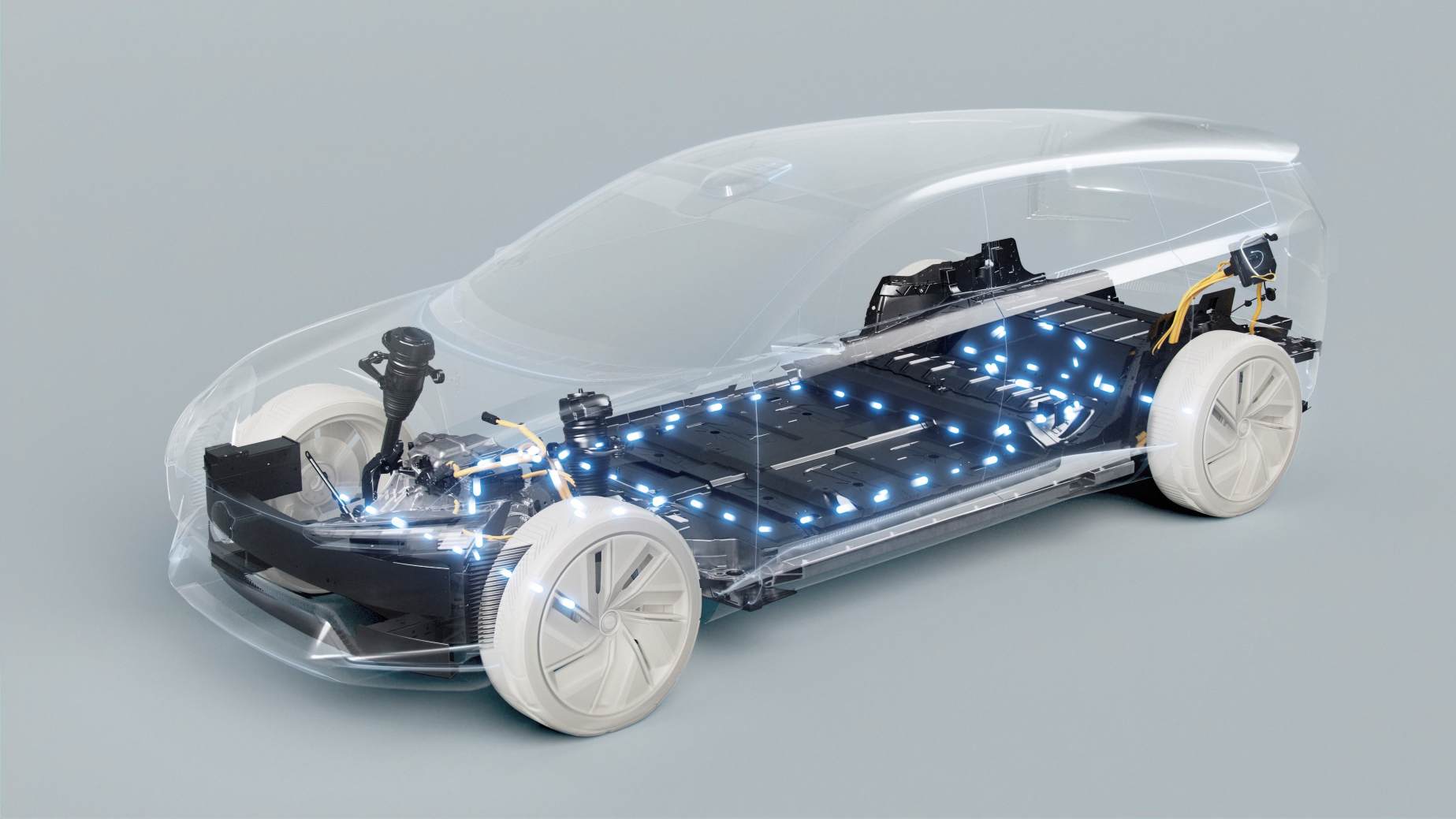 In conjunction with Northvolt, Volvo aims to achieve a real-world driving range of 1,000 km for its third-gen EVs. Image: Volvo

By the time it introduces its third-generation EVs closer to 2025, Volvo aims to integrate the battery pack into the floor of the car, using the cell structure for overall vehicle stiffness and improving efficiency. Also on the agenda is collaborating with Northvolt to increase the energy density in its battery cells by up to 50 percent compared to what’s available today. Before the decade ends, Volvo Cars is targeting breaching the 1000 Wh/l energy density milestone, which would bless its EVs with as much as 1,000 km of real-world driving range.

“We want to constantly increase the customer benefits of driving a pure electric Volvo car,” said Henrik Green, chief technology officer at Volvo. “By simplifying the design and integration of our battery cells, we can reduce weight and maximise space, allowing for considerable improvements in battery capacity, range and charging times”, he added.

Volvo to develop its own OS

The next generation of all-electric Volvos, including the XC90 successor, will run Volvo’s own operating system named VolvoCars.OS. This, Volvo says, will enable it to roll out quicker over-the-air updates to help improve its models regularly and without significant delays. The underlying operating systems for VolvoCars.OS are Android Automotive OS, QNX, AUTOSAR and Linux. With Extended Vehicle API, VolvoCars.OS will give developers access to in-car features such as vehicle sensor data, user interfaces and cloud-based features such as fleet data, subject to customer consent, which will enable them to create new services and applications for Volvo models. With its own OS, Volvo aims to roll out quicker and more frequent OTA updates to improve vehicles over their lifetime. Image: Volvo

In conjunction with Nvidia and Google, Volvo is also developing a core computing system, which will be introduced on all its future models. The system comprises three main computers, which support each other in operating vision processing and artificial intelligence, general computing and infotainment functions.

Concept Recharge a peek into the future of Volvo

Dubbed the ‘manifesto’ for Volvo’s future models, the Concept Recharge previews the successor to the Volvo XC90, but looks nothing like the combustion-engined flagship SUV. Following the mantra of ‘less but better’, the Concept Recharge lacks a grille and instead has a clean, sealed-off front-end, with a fresh interpretation of the ‘Thor’s Hammer’ LED headlights. The rear doors are rear-hinged and the roof is all-glass; the wheels are pushed to the extreme corners, so the Concept Recharge has no real overhangs to speak of, and it has a much lower roof than the current XC90, to aid aero efficiency. The tail section is flat, with L-shaped LED tail-lights originating at the top of the D-pillar and extending into the tailgate. 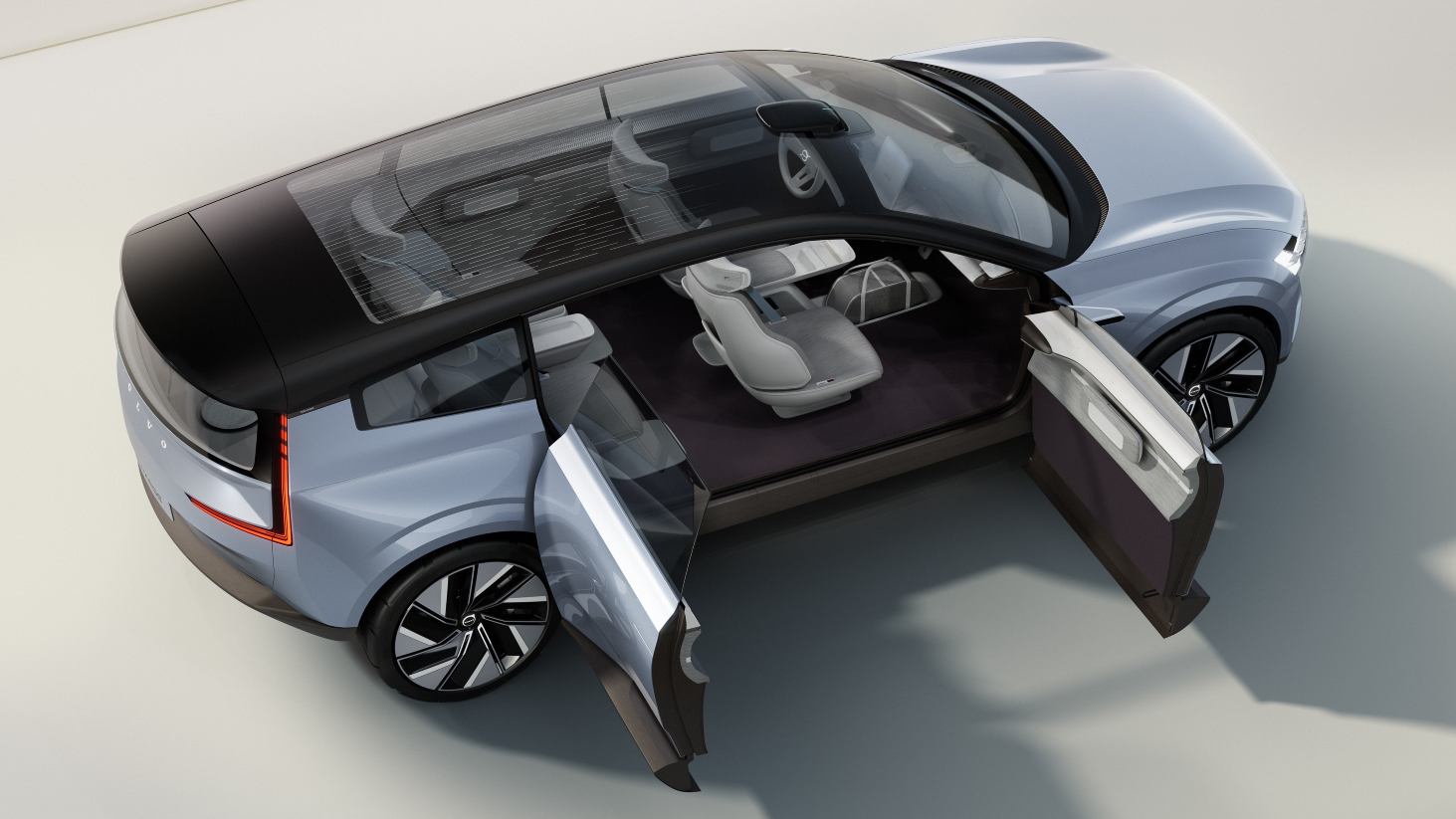 Thanks to its EV-exclusive platform, the Concept Recharge features a completely flat floor devoid of any sort of transmission tunnel or other obstructions; a change all future Volvos will benefit from. With a super-long wheelbase, the concept has loads of space on the inside, and also gets a large storage space between the front seats. Despite the lower roof, Volvo has been able to retain the high seating position of its current SUVs. A 15-inch, portrait-oriented touchscreen is present, too, as is a full-digital instruments display and a head-up display. 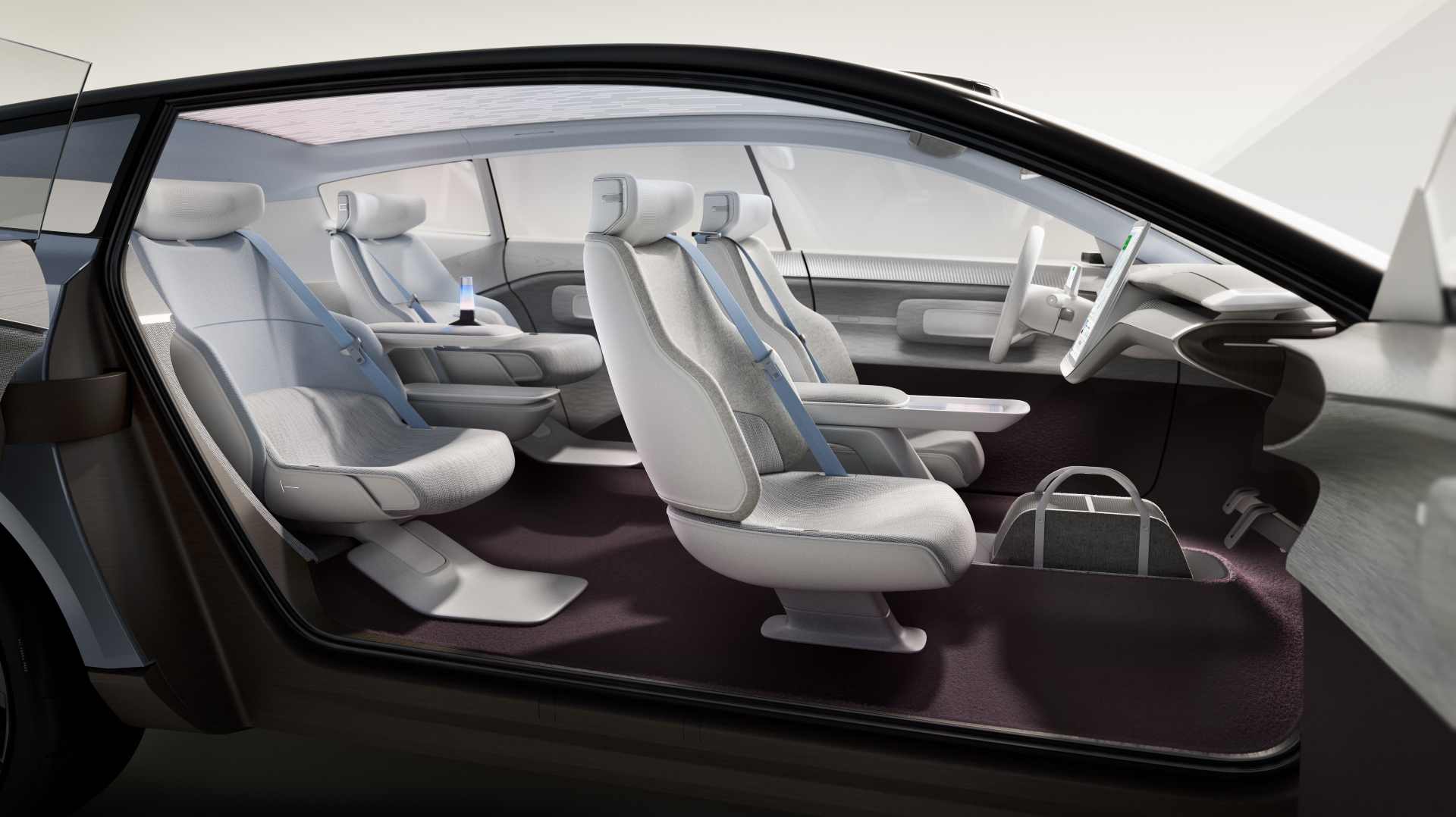 Volvo has collaborated with Google on enhancing in-car infotainment and connectivity, and all its future models will incorporate Google’s Digital Car Key function and virtual payment services.

“Our teams have spent a lot of time with Google to further develop and improve our user experience for the next generation of Volvo cars,” said Green. “Especially in terms of safety, serenity and simplicity, we have made great strides thanks to a deeper integration of design and technological development. We are convinced that it will allow us to create even better Volvo cars and set a new industry standard.”

Tesla Model S involved in fatal crash in the US did not use Autopilot, says NTSB report- Technology News, FP

Here’s all we know-India News , FP