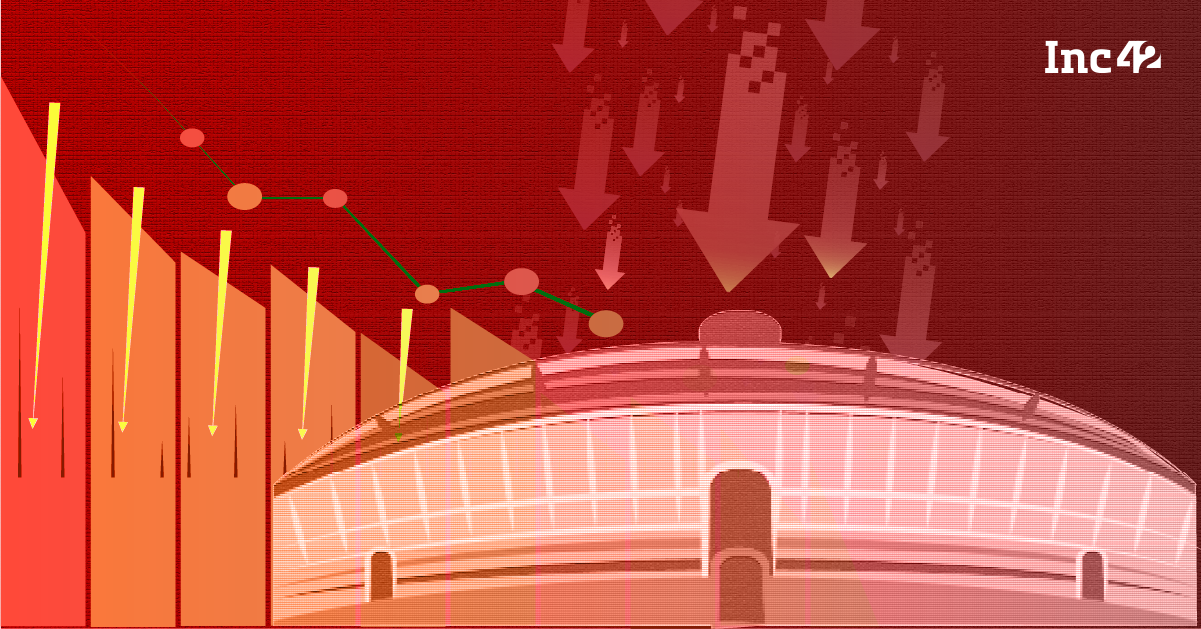 According to Inc42’s TES Survey 2022, 49% of the startup founders believe that abrupt regulatory changes create a negative impact on Indian startups

Besides, 54% of investors in the Indian startup ecosystem also believe that the sudden regulation changes in the tech sector have an adverse impact

The government’s intense scrutiny of business models such as digital lending, PPIs and BNPL has raised concerns in the fintech startup ecosystem

India has one of the world’s largest startup ecosystems, with the number of startups in the country at around 70K, according to the Department for Promotion of Industry and Internal Trade (DPIIT). However, one of the key challenges that startups face in India is the country’s volatile regulatory environment.

According to Inc42’s annual survey, TES Survey 2022, for its upcoming ‘State of Ecosystem Report, 2022’, 49% of the startup founders across 14+ sectors believe that continuous and abrupt regulatory changes create a negative impact on the growth of Indian startups. 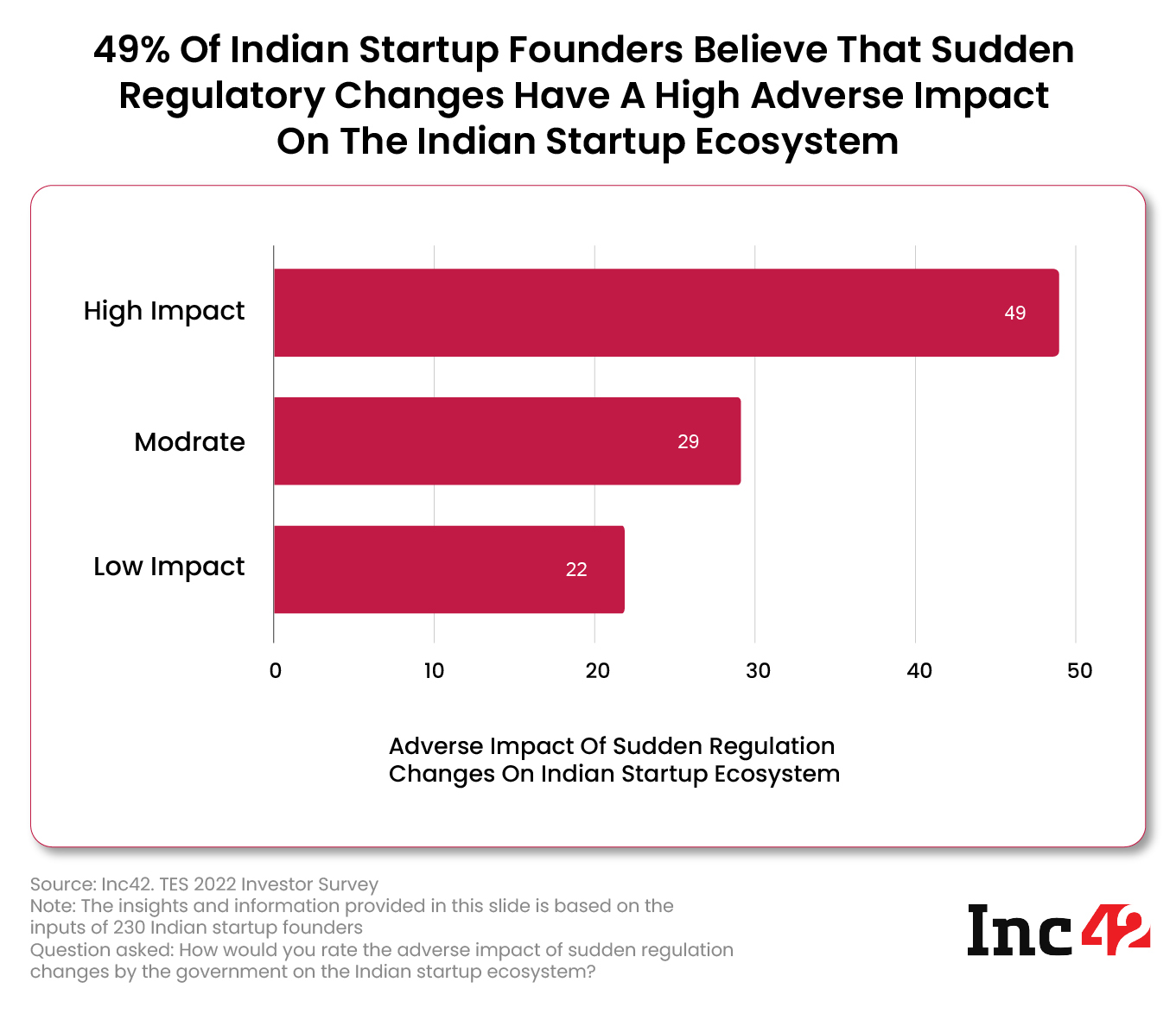 One of the sectors that have been impacted the most by these sudden regulation changes is the fintech sector.

India’s fintech startup ecosystem is one of the most influential ones, having produced 22 unicorns and more than 4.2K active fintech startups. It is set to have a size of $1.3 Tn by 2025.

The Reserve Bank of India (RBI) continues to be risk-averse and focuses on protecting the interests of the consumers. This has resulted in sudden changes in regulations by the central bank, which affects fintech startups.

This was also reflected in the survey as more than half of fintech founders said that abrupt regulatory changes create a highly negative impact on fintech startups in India. 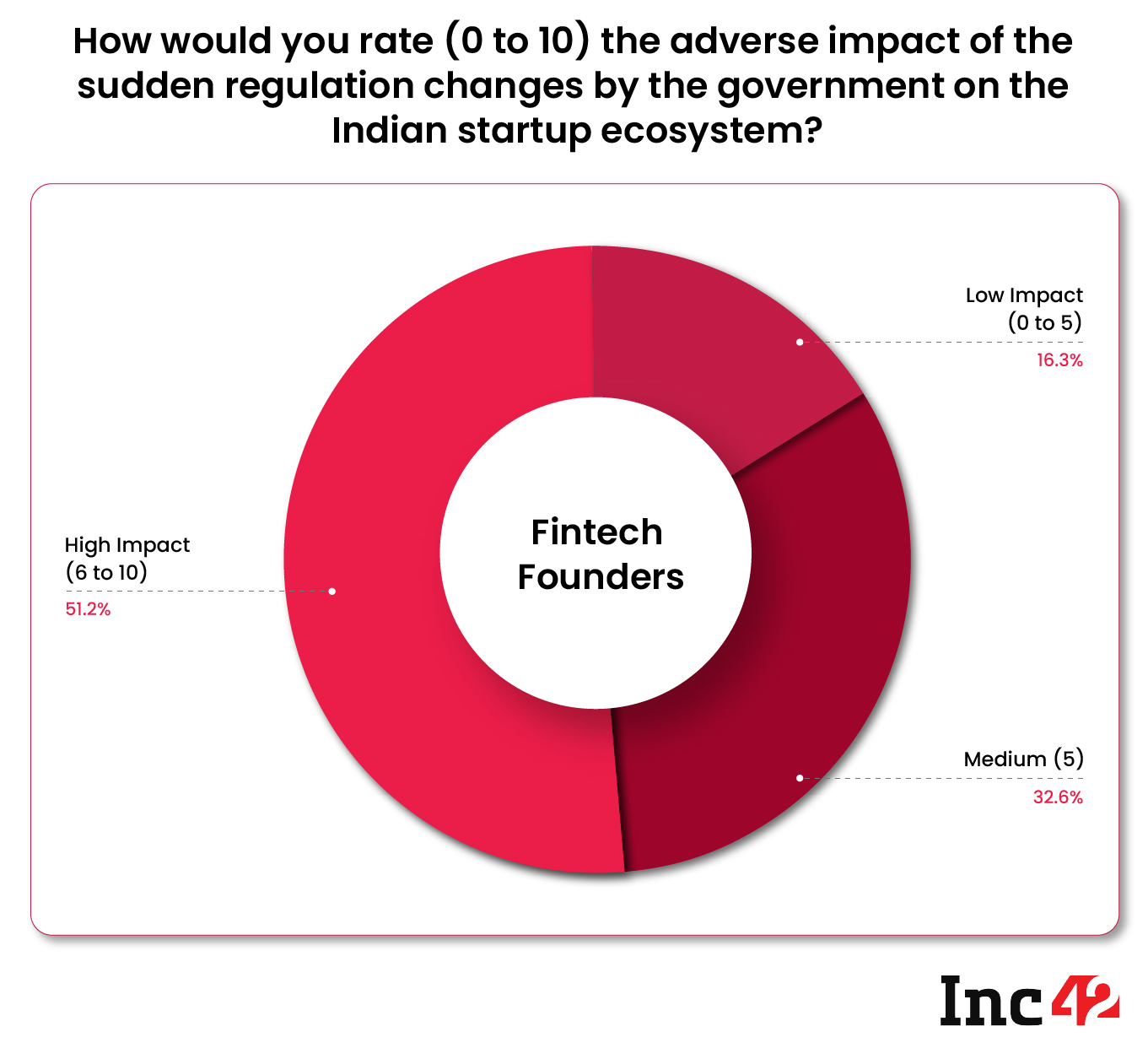 Subsectors within the fintech ecosystem such as digital lending, cross-border payments, payments bank, PPIs, credit cards and neo-banking have faced a slew of new regulations, which has left them at crossroads, unsure of the future.

The government’s intense scrutiny of business models such as digital lending, PPIs and buy now pay later (BNPL) has raised concerns within the startup ecosystem.

In an earlier conversation with Inc42, startup founders noted that sudden regulatory changes in areas where startups have already achieved success have created a negative sentiment among investors.

This has also impacted founders’ trust in the government’s programmes for the benefit of the Indian startup community. About 57% of Indian founders are sceptical of the government-led startup ecosystem enablement programmes, as per the survey.

Further, the investor community also agrees with the sentiments of the founders. According to the Inc42 survey, 54% of Indian investors believe that sudden regulation changes in the tech sector have an adverse impact.

Within the fintech ecosystem, the cryptocurrency ecosystem has been the worst impacted. The RBI has called for banning crypto in India and has constantly raised concerns about the apparent opaqueness of the system and its potential use for money laundering and other criminal activities.

At the same time, the government has already adopted a strict taxation regime for all cryptocurrencies, with a 30% crypto tax, 1% TDS, and possible inclusion in the GST ambit.

Apart from fintech, many other sectors such as ecommerce, enterprisetech, consumer internet and agritech have either vague, outdated or nonexistent regulatory frameworks.

The government is in the process of creating a new framework for the ecommerce sector, which has produced the highest number of unicorns in the country. With 23 unicorns and a potential to reach $400 Bn in market value by 2030, India’s ecommerce ecosystem has seen new business models emerge, such as vertical marketplaces and D2C.

However, in the absence of proper ecommerce norms, ecommerce companies have to adhere to retail and internet regulations and laws laid out under the Companies Act. This poses challenges for ecommerce startups.

According to a recent government report, ecommerce startups received 448 notices from authorities in the last 21 months for flouting regulations. For a segment which is set to see 350 Mn ecommerce users in 2025, the shaky regulatory foundations need to be addressed.

The government has also launched its ambitious digital commerce project, called the Open Network for Digital Commerce (ONDC). This makes the case for the new ecommerce framework even stronger.

Further, sectors like enterprisetech and agritech do not have proper regulations. For instance, agritech startups are following the norms set for the larger agriculture industry as there are no industry-specific regulations for agritech.

While there is no denying that the government and the regulator need to safeguard the end consumer, the absence of clear guidelines makes it difficult for startups to change their business models and strategies as per changing regulations. It increases the uncertainties for the startups.

Clear, comprehensive and well-laid framework and regulations for the emerging sectors of the economy will not only help startups by creating a helpful operating environment but also give confidence to the investors.

Most Active Investors In The Indian Startup Ecosystem In Q1 2022

How To Determine Worthwhile Investments For Your Business

Both Things Can Be True: Bias and Bad Fundraising Advice