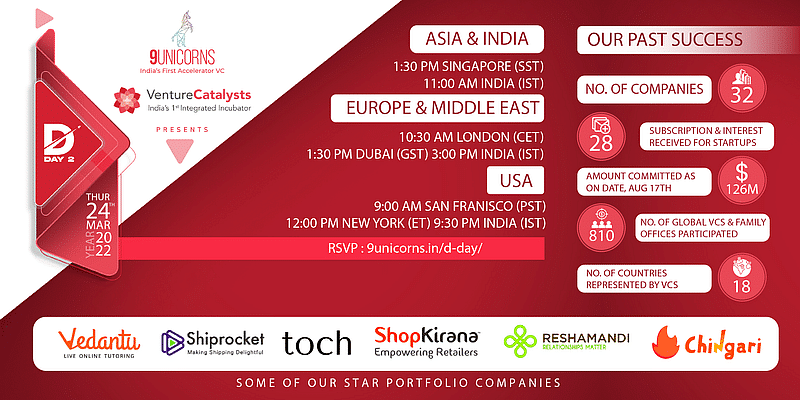 After a massive success of its maiden demo day, India’s leading accelerator fund 9Unicorns and early-stage investor Venture Catalysts have announced the launch of its second global demo day – DDay 2, on March 24, 2022.

DDay 2 will have 36 selected early and growth-stage startups present their business pitches before marquee global and domestic investors. The two-day event will kick-start with showcasing about 18 shortlisted startups, each from 9Unicorns and Venture Catalysts.

The idea of DDay is to ensure that the startups graduate as robust, scalable, and fundable ventures. Demo days are becoming a vital part of the Indian startup ecosystem that is home to more than 50,000 startups and 90 unicorns, attracting massive global investments. 2021 in particular, witnessed record investments of over $32 billion, according to Yourstory data – which speaks volumes about Indian startups’ ability to create large valuable and multi-billion-dollar businesses.

“We are constantly looking at ways to keep the hustle of the startup founders alive through various initiatives including the demo day. Spread over two days of pitching sessions, the demo day will help the startups raise larger rounds. Before the demo day, we also extensively engaged with the startups in further developing their product, team, refining their business model, and scaling them into high growth businesses,” said Dr Apoorva Ranjan Sharma, Co-founder, 9Unicorns and Venture Catalysts.

“Our first demo day was a massive success and we want to break our own records with the second one,” he added.

DDay 2, which will be conducted virtually, will bring together an unprecedented set of opportunities over two days, enabling greater access and interactions between the startups, global and domestic venture capital firms, family offices, Unicorn founders, angel investors and CXOs.

Over 1500 such investors are expected to be a part of DDay 2 – up from 900 participating investors in the maiden event that was organised in August last year. The event was immensely successful wherein 32 startups participated and 28 of them raised around $126 million. FinTech, ecommerce and SaaS sectors attracted the maximum funding. Interestingly, about 45 percent of the participating startups were by second time or serial founders.

Some of the startups that raised bigger rounds (more than $10 million) include Klub, a revenue based finance firm, CoutLoot, a social commerce platform, Evenflow, a Thrasio-style ecommerce rollup and Rooter (a gaming startup), amongst others.

The team at 9Unicorns and Vcats also helped the startups with their demo day preparations starting right from training the founders to pitch under 60 seconds to mentorship on business restructuring.

“9Unicorns, and the entire team have been super helpful in guiding us through the process of fundraising (both equity and debt), how to think about the captable structuring, and hiring talent as we scale the business. The team is always a call away whenever we need them – from being a shock absorber during the tough times, to being our extended family when we celebrate the good ones,” said Utsav Agarwal, Co-founder of Evenflow, an ecommerce roll-up, while sharing his experience from the maiden demo day.

To this, Anurakt Jain the Co-founder of revenue based finance firm Klub said, “We are grateful for the immense support and belief by 9Unicorns in us, since our inception. Their efforts have been instrumental in helping us become India’s leading revenue-based financing platform. 9Unicorns have helped build Klub beyond capital, and we thank them for having their faith in us, in the past and for the times to come.”

How Draup is implementing an employee-first strategy

3 things that will increase adoption of vernacular edtech in Bharat