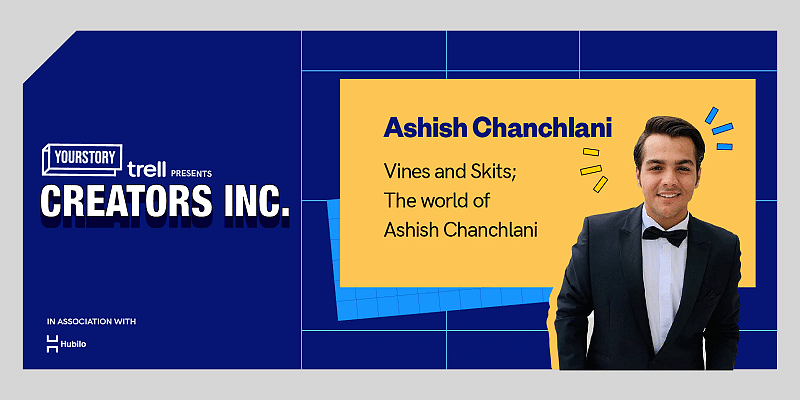 Ashish Chanchlani is a man of many talents. A YouTuber, Instagramer, storyteller and an actor in the comedy genre – he has risen to be one of the most popular social media influencers in today’s time. With his honest, open and frank conversations, he rules the hearts of more than 42 million subscribers and followers across platforms.

It’s often said and rightly so that people tend to see the success of an individual without realising the grind behind it. “Sometimes it takes us even a month to make one video,” says Ashish, in an unfiltered conversation with YS Founder and CEO Shradha Sharma at the inaugural edition of Creator Inc Conference.

Unlike many success biographies which emphasise on the importance of waking up early, for Ashish, his mornings do not begin before 10 am. Post an hour or two at the gym, he swings into action with his team by mid-day and then people “stop looking at the clock”, he reveals

“We plan the entire month. Ideas, brand collaborations, interviews…we plan everything. Then we come up with the main thing – ‘what to create now?’ Topic, scripts, timelines for shoot… yahi chalta rehta hai poore din 11-12 baje tak (this goes on throughout the day till about midnight) and we enjoy talking to each other,” he says.

Once an idea is constructed, the team starts working on the screenplay which takes a lot of effort in order to create original content and dialogues. “I hate to reuse a joke. Papa bolte hain, kuch bhi karo, original banao (Dad says do whatever, but make sure it’s original)

The team set out the script and then they take a “good time” to shoot. At times when they are not completely satisfied with a shoot, they go back and do it again.

“You can’t tell the public that you put up a bad scene because you can’t shoot it again. Content is content and you can’t compromise on that, even if it takes a month to create one video,” he adds.

Meanwhile, he also ensures that he continues to entertain his audiences through Instagram through Reels, live sessions, stories and more.

“Then of course, I have to also live my personal life –Peter Parker wali life (the Peter Parker life which is the alter ego of Spiderman),” he jokes.

Before signing off, he shares one piece of advice for the new age creators:

“No matter what you make, no matter how successful it is, you can’t keep on banking on it. Create new things, be honest to yourself and be confident. Aaj phod ke aayenge..(will kill it today)  that feeling should be there everywhere in life.”

Recognising the burgeoning creator ecosystem and the new wave of entrepreneurship that comes with it, YS is celebrating the works of both established and emerging influencers in an initiative aimed at identifying, celebrating and accelerating the journey of digital creators who make extraordinary, unique and engaging content. We’ve partnered with Trell to bring you the Top 100 Creators challenge, which you can apply for here.

Guide To Start Up Your Engineering Career