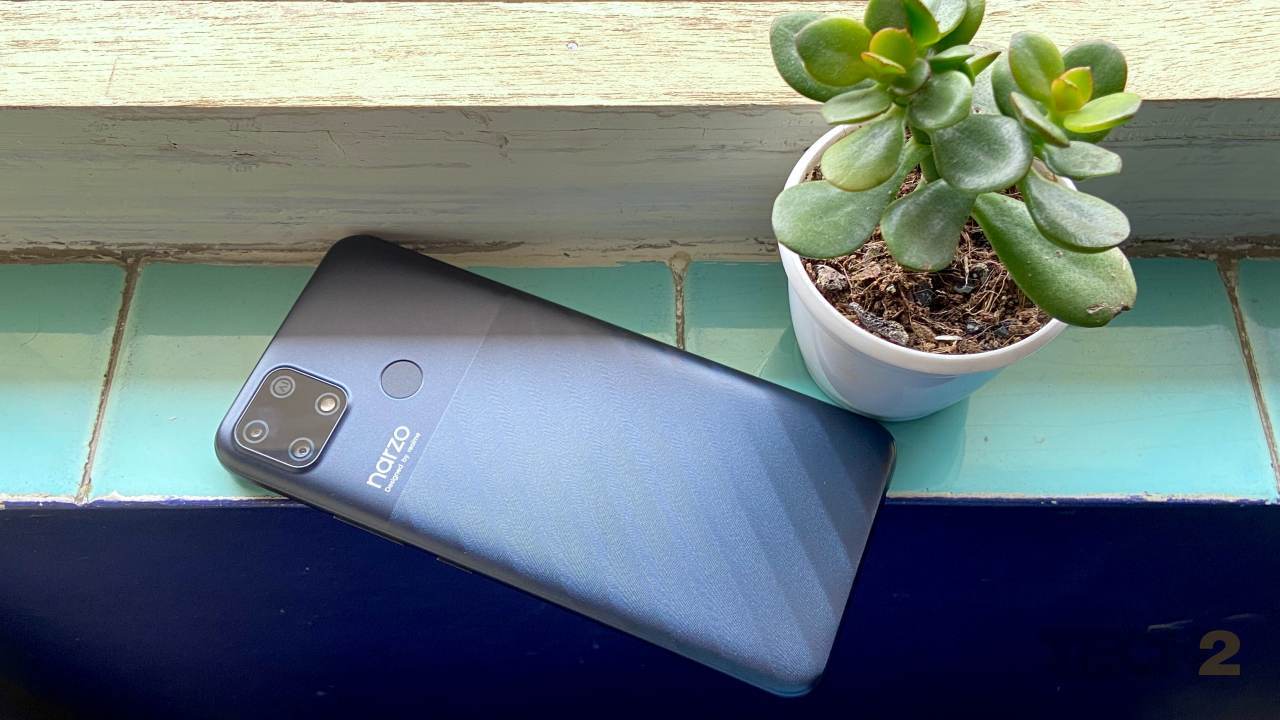 In the sub-Rs 10,000 segment, it’s hard enough to build a smartphone that offers a smooth user interface. The camera may falter, the design may be bulky, the software is just about functional, but you do end up with good battery life. It’s the basic stuff that we have come to expect from a sub-10K smartphone, and as you can tell, they are far from perfect.

Keeping the above point in mind, the Realme Narzo 30A (priced from Rs 8,999) is a surprisingly good entry-level smartphone. The software experience is quite smooth (with a few minor hiccups), the display is good and battery life is excellent. However, its problems begin when Realme markets it as a gaming smartphone, which it clearly isn’t.

Still, that does not make it a bad entry-level (or low-end budget) smartphone for the non-gamer. But this applies only if you are on a really tight budget.

Let’s tackle the elephant in the room. In fact, let’s aim a tranquiliser dart at it.

The Realme Narzo 30A is not a gaming smartphone. If the specs don’t give it away, the price tag should.

I disliked the MediaTek Helio G85 inside the Redmi Note 9 (Review) last year. Of course, I had to deal with the bloated MIUI 11 software. This was followed by the MIUI 12 update, which only made things worse. The gaming experience was below average and not too great for a smartphone priced at Rs 11,999 back then.

So, with the lighter and less bloated Realme UI 1.0 inside, I expected better. I did get that treatment on the software side of things, but the gaming experience was worse than the Note 9.

I dared to run Call of Duty: Mobile, and the game was just about playable. With the graphics at Low and the frame rate set to Medium (and every other setting turned off), the phone heated up quicky after a couple of matches and the game started to lag. In fact, I also noticed how parts of the scene would not even load, as you can see in the screenshots below.

Only half the map has loaded, which also means I cannot visually see the players or their markers at the other end.

Move further into the map/scene, and the rest of it starts to load.

The fast-paced Asphalt 9 Legends was not playable even at the lowest graphics setting (Performance). The older Asphalt 8 was playable with plenty of hiccups at medium graphics. Real Racing 3 was the only game that ran without any noticeable hiccups.

With that in mind, I decided to try out a few casual titles. Endless runner, Blades of Brim had some strange audio issues, but the game was playable with a hint of lag. Good ol’ Subway Surfers also ran smoothly, but at a noticeably lower resolution. Fruit Ninja 2 ran with a lot of hiccups and stuttering, something that I found a bit surprising.

In short… well, you kind of get the point here. It’s just not meant for gaming.

I like the subtle design of the Laser Black finish, even though the phone feels quite bulky at 207 grams. Image: Tech/Sheldon Pinto

The Narzo 30A’s design reminds me of the Nokia 2.4 and the Redmi 9 Power. The painted plastic body does not catch fingerprints and comes with a fine, grooved texture on the back that surprisingly does not add to the grip. Still, I like the subtle design of the Laser Black finish, even though the phone feels quite bulky at 207 grams.

The painted plastic body does not catch fingerprints and comes with a fine, grooved texture on the back. Image: Tech/Sheldon Pinto

The basic dual camera setup at the back sits in a neat square island that barely protrudes from the rest of the surface (partially because it’s already quite thick to begin with). If I had to pick between the Nokia 2.4 and the Narzo 30A, I’d still pick the 2.4 for its classy yet understated looks.

With an HD+ resolution, I did not expect much from this entry-level smartphone, but it did surprise me with its bright and mostly accurate colours. The 6.5-inch LCD mini-drop (notch) display surprisingly did not have that typical budget-blue tint, which is common with smartphones in the sub-Rs 10,000 segment.

My only gripe here was that the screen is a smudge magnet. Image: Tech/Sheldon Pinto

The whites were also quite accurate, and the colours a bit saturated. Brightness was not a problem, meaning you can stream your favourite Netflix shows outdoors. It’s just that things won’t look as crisp because the phone only packs in L3 Widevine support or SD video resolution. As for text and icons, they did look quite sharp, but showcased some jagged edges upon closer inspection. My only gripe here was that the screen is a smudge magnet. Those fingerprints are a forensic team’s wet dream, as they really hard to wipe off the screen.

Pick any entry-level smartphone in the market today, and you will be greeted with hiccups from the time you first start it up. In fact, this is a problem even with some budget smartphones such as the Nokia 2.4 (Rs 10,399), despite it having bloatware-free Android One inside.

So, it was surprising to see the Narzo 30A run quite smoothly, given the chipset inside along with the meagre 4 GB of RAM. Realme seems to have done a fantastic job of optimising Realme UI 1.0 (still waiting for Android 11), and things usually worked smoother than expected in day-to-day use.

Of course, Realme and the Narzo 30A cannot perform miracles, given the minimal RAM available to play around with. Apps don’t remain in memory for long and take an extra split-second to start up. But multi-tasking is still possible thanks to the G85 chipset inside. You have to remember that Realme is providing a budget chipset (found in the 10-11K price bracket) in an entry-level smartphone (priced from Rs 8,999). Of course, I did not test the base 3 GB RAM model, but I would not recommend buying that variant anyway.

An above-average camera for a budget smartphone

Given the Narzo 30A range starts from the entry-level segment (Rs 8,999) and also steps into the low-end of the budget segment (Rs 9,999), I did not expect much in this department, but the camera does a decent job with still imaging.

Low-light photos come out quite noisy and lack detail, which is something I expected from a smartphone in this price range. Image: Tech/Sheldon Pinto

Selfies come out crisp in daylight and they look fine despite the bumped-up saturation. Photos from the primary 13 MP camera lacked the abnormally high levels of sharpness (from the selfie camera) but looked just fine with natural colours and proper exposure. Details in the shadows get lost, but thankfully, the bright areas are under control, because the HDR system kicks in frequently. Low-light photos come out quite noisy and lack detail, which is something I expected from a smartphone in this price range. It’s also slow to click photos and keeps the shutter on for longer, resulting in plenty of motion blur. There’s also a Night mode, which does not improve the photos but only makes them worse by adding high levels of contrast and colour saturation.

Video is not bad for an entry-level shooter. It lacks any stabilisation whatsoever, so the recording looks quite shaky, but it packs in enough detail given that it maxes out at 1080p @ 30 fps.

As with most entry-level and budget smartphones, battery life is high priority. Given that this phone is not recommended for playing games, things obviously get even better with the 30A.

I managed to use the phone for two whole days before plugging it in. Using it as my primary phone meant the usual emails, messaging, social media, video streaming and camera usage. This is impressive, but also the norm with most smartphones in this price range. This would have been a good device for video streaming, but given the SD resolution I mentioned in the display section of this review, it’s not recommended.

I managed to use the phone for two whole days before plugging it in. Image: Tech/Sheldon Pinto

With an 18 W charger in the box and a massive 6,000 mAh battery, the phone went from 0-19 percent in 30 minutes, 34 percent in an hour and finished charging the mammoth battery in four hours, which is quite a long time, even for a budget smartphone. But it did not beat the Nokia 2.4 (Review) with its 5 W bundled charger.

Should you buy one?

If you are on a tight budget… yes!

The Realme Narzo 30A may be severely underpowered as a gaming device. But as a basic smartphone (for WhatsApp video calls, education, etc.) it gets the job done better than most others in and above this price range (Rs 8,999-9,999), offering stellar battery life, a decent camera and smooth software. It’s better than the Nokia 2.4 and Redmi 9 Power (Review), both of which are priced higher than the 30A. But go for a Narzo 30A only if you aren’t willing to spend a penny over Rs 9,999.

The Realme Narzo 30A may be severely underpowered as a gaming device. Image: Tech/Sheldon Pinto

For those of you who can stretch your budget a bit, I’d recommend Poco M3 (Review). At Rs 10,999 (6 + 64 GB), you are definitely getting a complete budget smartphone, with better performance, better sound (dual speakers), better streaming video (Widevine L1 support) and a decent camera. Oh, and it looks cool too!