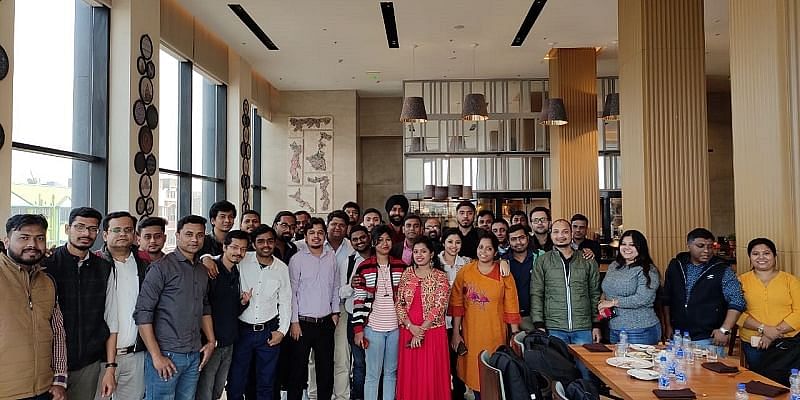 For decades, Indian industries have been plagued by traditional business practices. The last 10 years, however, have pushed the country towards an inevitable change. The new generation of leaders stepping into legacy businesses are changing operations altogether.

Shyam Future Tech LLP (SFT) is one such startup.

Incorporated in October 2017, SFT is the IT arm of Shyam Steel Industries Ltd, an Indian conglomerate with more than 400 expert professionals working in its different departments. The operations are currently led by Raghav Beriwala, grandson of Shyam Steel’s owner Shyam Beriwala.

“I have leveraged both SFT and Shyam Group’s expertise to create more products and solutions for businesses working traditionally and losing on a lot of money and time because of lack of technology,” Raghav tells YourStory.

For Raghav, growing up in a business family seeing a business grow since his childhood has been an enriching experience. From an early age, he was taken to the company’s factories to see how Shyam Group, directly and indirectly, was making a difference to many people’s livelihood and life.

“It was an eye-opening journey. It was about a lot of responsibilities. I became aware of them from an early age,” he says.

Raghav joined the business in 2015 after completing his master’s in entrepreneurship and international business. He saw that the company was running several IT solutions from the market with some developed in-house. But there was no unifying product in the market.

“The new generation prefers working smarter and faster. At the same time, they comparatively know no tradition, value, and culture. To bring both these generations to a central point was a big challenge for us; the only way to do it was through technology,” he adds.

This aim to unify all solutions running in the organisation is what led to the beginning of SFT. Soon, the team was confident enough to scale the product to a larger market, local and international, from small enterprises to large companies.

Today, SFT is a team of more than 120 techies, has over 580 clients, operates across over 22 countries, and has worked on more than 1,000 projects. During the initial days, the startup was funded by its parent organisation, Shyam Steel.

However, it is now operating completely in bootstrapped mode.

“AI-powered tools have been phenomenally serving these purposes. So, we are focusing more on creating innovative and dynamic solutions for the market,” says Raghav.

Digitising an organisation that’s more than 63 years old was a major challenge, and the SFT team had to experiment a lot in the initial phase.

“Some ideas failed while others worked. We picked up those that worked well and went ahead with them. We were persistent with our goals. This actually helped us see through the chaos and ultimately achieve our goals,” he adds.

Today, the startup has teams of developers for specific technologies — Python, Angular, React, .Net, .PHP, and AI — who work around numerous technologies across sectors like edtech, ecommerce, real estate, consumer services, logistics, and finance, among others.

India’s SaaS revenue has reached $3.5 billion as of March 2020, growing at 30 percent CAGR, with 75 percent of it coming from global sales, according to a report by Nasscom in partnership with SaaSBOOMi (a community of Indian SaaS founders) and Zinnov.

The pace of development across India, and even the world, has been great. However, there is still a need for sharper solutions, believes Raghav. SaaS is liberating; it dissolves infrastructure limitations and seamlessly simplifies remote operations and functioning.

“Having said that, it’s not rocket science. Paying attention to details and creating smart solutions will simplify regular work and utilities. Besides enterprise solutions, we will be working on developing innovative solutions for these as well,” he added.

IT has been a major transformative force over the past few years. Almost every entity is working in this space and there is intense competition.

Raghav believes that in today’s era, every IT firm is SFT’s peer and competitor.

Going ahead, the team will continue to work extensively on a Unified Platform aimed at MSMEs and large organisations alike. Moreover, the startup has worked on a split model in its teams for service and products.

SFT has also been working extensively on developing some common tools for MSME automation, which will be launched shortly.

“Hopefully, we will be able to complete our vision in the next six months. We aim to post stronger growth based on our product. Also, we have been operating on foreign shores but did not have any property there. So, we plan to do that shortly,” Raghav says.