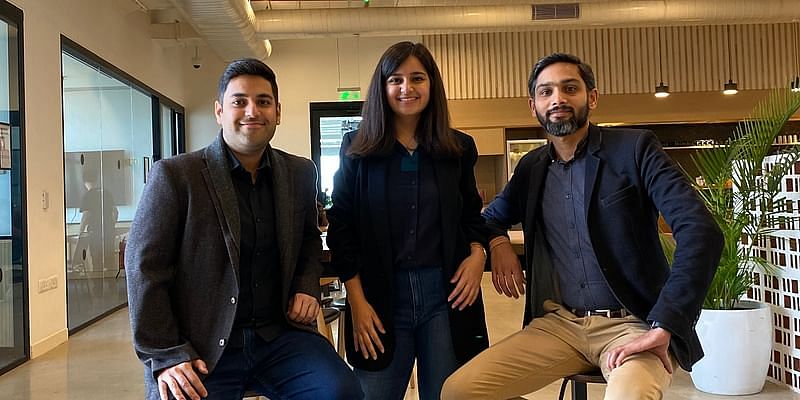 Amidst the COVID-19 pandemic, Dhruv Washishth realised a gap within the Indian startup and VC ecosystem — there was a need for a younger VC fund managed by younger people.

“The legacy funds have done a great job and have been great mentors, but I think the next decade is going to be about younger Indian founders pushing the envelope, and people who want to go global. To understand their needs, you need a fund that is younger and has worked closely with founders,” Dhruv tells YS.

To fill this gap, he started Paradigm Shift in 2020, along with his sister Surabhi Washishth and Govind Mundhra. The global VC fund backs homegrown startups that can put Indian companies on the world map.

Dhruv reached out to his sister, Surabhi Washishth, who backed him on the idea of starting a global VC fund. As one of the youngest HR directors in the country, Surabhi had earlier worked with WeWork India, where she scaled the team from one to 500 and was also part of the downsizing efforts during the pandemic.

Surabhi, in turn, introduced Dhruv to Govind, who earlier was the CFO of WeWork India. In fact, Dhruv had previously worked at InMobi.

What does the fund aim for

Dhruv says, “It is important for the core team to take the fund forward, and they are amazing partners. Being first-time fund managers, we too need to work as a startup; we are also raising capital. We have had some very inspiring and interesting conversations in the past four-five months. Industry stalwarts and family offices now resonate with the idea of Indian startups going global. Sharing our vision with big funds in India is inspiring, but it has its challenges during COVID times. And everyone is adapting.”

Dhruv believes the Indian B2B SaaS startups have already laid the foundation of taking Indian companies to the world map. He says, “I think consumer tech and fintech companies that have built for core markets in India have the scope to scale globally.”

While there lies a big India opportunity with the Tier II and III cities, the VC fund is looking at niche Indian startups that cater well to Bengaluru, Mumbai, and Delhi, and can scale globally.

Dhruv says the most compelling and unique reason for Paradigm Shift to invest in a startup lies in the founders’ passion for the sector and the problem they are trying to solve.

“The founder’s passion and intensity to build something that lasts and brings a valuable change to the world is the primary driver for us,” he adds.

Starting a VC fund worked as a natural progression for Dhruv. After graduating from Christ University in 2012, Dhruv witnessed the early days of Flipkart when it was selling books. He was fascinated by the startup ecosystem.

Between 2013 and 2019, he founded two startups and did a two-year entrepreneurship course at Draper University in San Francisco.

“Everything was fascinating. I started up a restaurant deals startup called Cheersmate in 2013. The startup was doing just the opposite of what Groupon was doing, which was primarily aggregating these large deals for large groups, and we went the other way, where we customised the restaurant deals for seven-plus people,” explains Dhruv.

In 2014, he was selected by the UK government for a young entrepreneur award, so he decided to move Cheersmate to the UK. At the age of 23, his startup seemed like a great idea as it gave him a good insight into the market and how it was perceived.

“But I didn’t find the environment as exciting as Bengaluru. There were multiple factors, the biggest was that the pace of things was much slower in terms of outlook and demeanour. Since it was funded by the UK government, I received a grant to go there and experiment. But it didn’t resonate with me,” says Dhruv.

Dhruv operated Cheersmate till 2016, post which the startup shut down. Soon after, he flew back to Bengaluru and launched Angel Hack with TiE Bengaluru — a large hackathon marathon.

During this time, he met several founders, and at TiE Bengaluru, he worked with industry stalwarts to run their accelerator programme, which plunged him deeper into the Bengaluru startup ecosystem.

He had two opportunities — one to do a Masters programme at the London School of Economics, and the other an entrepreneurship programme with the noted Silicon Valley VC Tim Draper’s school, Draper University, in San Francisco. He chose to pursue the Draper programme and left for the US.

“The two years programme is an experience of a lifetime. It gives you complete exposure to how the ecosystem in the valley works, and you get to meet Tim Draper. At San Francisco, you first-hand see things move at a lightning speed. It fascinated me and gave me a remarkably different experience,” Dhruv shares.

The Draper programme had 30 to 40 entrepreneurs from all over the globe, which helped him meet interesting people and expose himself to newer ideas.

It was at San Francisco that Dhruv was exposed to virtual reality (VR) technology and was fascinated with what it could do. Following this, he launched his second startup, PSV, in the education space.

“We were looking to use VR as a medium to make education fun and interactive. We launched physics and chemistry modules for 8th and 9th-grade students. We also got into an accelerator programme operated by Boost VC,” says Dhruv.

His co-founder was a BITS Pilani alum who was studying computer vision at the Carnegie Melon University.

“We got immense learning on future tech in the valley and how people think. We did it for two years, but we faced a challenge with the product-market fit. We tried selling it to teachers and public schools in the US, but it was a huge challenge. It made me realise the importance of timing in a startup’s journey. If the timing isn’t right, scaling a business can be really hard,” adds Dhruv.

Although the startup had a few customers, reaching the next level of growth was getting harder, and eventually, the startup shut shop.

Before launching the Paradign Shift fund, from July 2019 to December 2020, Dhruv worked with Ilya Volodarsky — Co-founder of the Segment Startup Programme — on its international growth and expansion.

He says that one of the learnings from being a founder of two startups has been to go out and experiment and find the right team that can crack any given problem.

Through this entire journey, Dhruv learnt the importance of team, the right mentorship, and product-market fit. With his fund, he aims to focus on the same.

“Many people have ideas but they don’t take the leap. The next important thing is to find the right people who can work with you and crack the idea. As a fund, that is what we do. We look at backing people who understand the industry and are willing to take the risks and push that envelope forward,” says Dhruv.

Despite gains, gender diversity in VC funding struggled in 2020 – TechCrunch

How To Attract More Families to Your Daycare

Fintech stays hot, Brex doubles, and startup IRR is up all over – TechCrunch