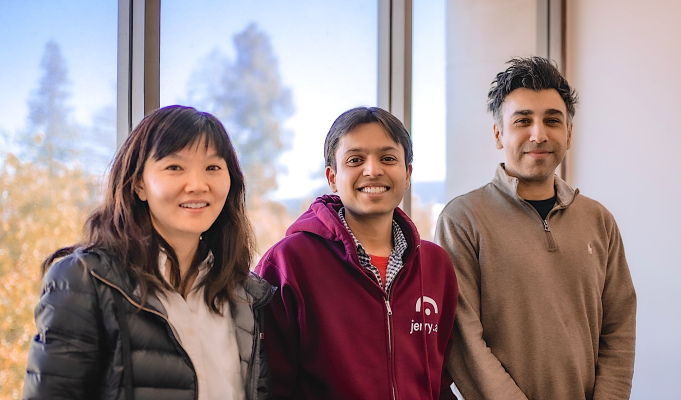 When Art Agrawal was growing up in India, a car ride was a rare treat, and car ownership was a dream. When he moved to the U.S. and bought his first car, he was shocked by how much it cost and how difficult it was to maintain a car.

In 2012, he co-founded a company called YourMechanic that provides on-demand automotive mobile maintenance and repair services. Over the years, the challenge of helping consumers more easily find car insurance was in the back of his mind. So in 2017, he teamed up with Lina Zhang and  Musawir Shah to found Jerry, a mobile-first car ownership “super app.” The Palo Alto-based startup launched an AI/ML-powered car insurance comparison service in January 2019. It has quietly since amassed nearly 1 million customers across the United States as a licensed insurance broker.

“Today as a consumer, you have to go to multiple different places to deal with different things,” Argawal said. “Jerry is out to change that.”

And now today, Jerry is announcing that it has raised more than $57 million in funding, including a new $28 million Series B round led by Goodwater Capital. A group of angel investors also participated in the round include Greenlight president Johnson Cook and Greenlight CEO Timothy Sheehan; Tekion CEO Jay Vijayan; Jon McNeill, CEO of DVx Ventures and former president of Tesla and ex-COO of Lyft; Brandon Krieg, CEO of Stash and Ed Robinson, co-founder and president of Stash.

CEO Argawal says Jerry is different from other auto-related marketplaces out there in that it aims to help consumers with various aspects of car ownership (from repair to maintenance to insurance to warranties), rather than just one. Although for now it is mostly focused on insurance, it plans to use its new capital to move into other categories of car ownership.

The company also believes it is set apart from competitors in that it doesn’t refer a consumer to an insurance carrier’s site so that they still have to do the work of signing up with them separately, for example. Rather, Jerry uses automation to give consumers customized quotes from more than 45 insurance carriers “in 45 seconds.” The consumers can then sign on to the new carrier via Jerry, which would even cancel former policies on their behalf.

“With Jerry, you can complete the whole transaction in our app,” Argawal said. “We don’t send you to another site. You don’t have to fill out a bunch of forms. You just give us some information, and we’ll instantly provide you with quotes.”

Its customers save on average about $800 a year on car insurance, the company claims. Jerry also offers a similar offering for home insurance but its focus is on car ownership.

The company must be doing something right. In 2020, Jerry saw its revenue surge by “10x.”

For some context, Jerry sold a few million dollars of insurance in 2019, according to Argawal. This year, he said, the company is on track to do “two to four times” more than last year’s numbers.

“There’s no other automated way to compare and buy car insurance, because all the APIs are not easily accessible,” he said. “What we have done is we have automated the end to end journey for the consumer using our infrastructure, which will only scale over time.”

Jerry makes recurring revenue from earning a percentage of the premium when a consumer purchases a policy on its site. So it’s partnered with carriers such as Progressive, Lemonade and Root to make that happen.

“A lot of the marketplaces are lead-gen. A very small percent of their revenue is reoccurring,” Argawal said. “For us, it’s 100% of our revenues.”

Down the line, Jerry wants to become a carrier itself, but is realistic in that it will take time to get licensed in all 50 states, so it expects those relationships to continue for some time.

Goodwater Capital’s Chi-Hua Chien notes that the insurance space has historically been a very challenging category from a customer experience perspective.

“They took something that has historically been painful, intimidating and difficult for the customer and made it effortless,” he told TC. “That experience will more broadly over time apply to comparison shopping and maintenance, too.”

Chien said he was also drawn to the category itself.

“This is a competitive category because 100% of drivers need to have auto insurance 100% of the time,” he said. “That’s a large market that’s not going to go away. And since Jerry is powered by AI, it will only serve customers better over time, and just grow faster.”