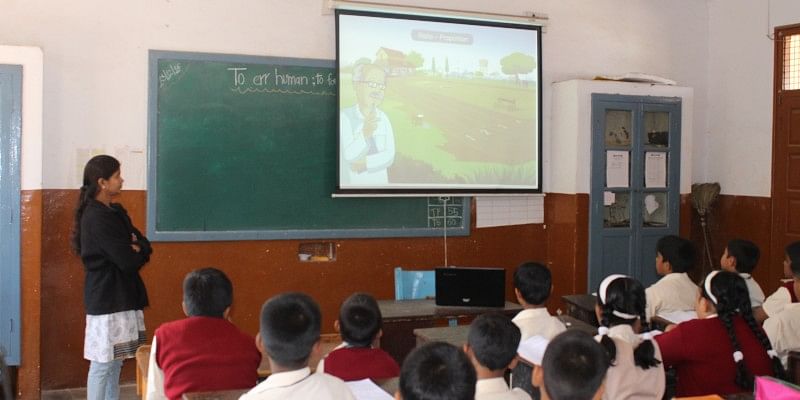 While the pandemic opened the floodgates for edtech startups in India, eSense Learning, the edtech arm of 60-year-old publishing house Navneet Education, had to halt its operations. Harshil Gala, CEO of eSense Learning Private Limited, attributes this to the absence of  ‘smartphone per person’ at the bottom of the pyramid.

Navneet is a publicly listed publishing major, and is one of the prominent players in the educational books business in Maharashtra and Gujarat. More than a decade ago, the company realised there were issues with the state board education system, and technology was the only way to bridge that gap.

Towards this, it launched eSense in 2008 to digitise courses for the state board schools in Gujarat and Maharashtra, both in English as well as the regional medium. Harshil says eSense has since grown into a key player in these two states, with 4000 schools using its smart class solution, a software that turns textbooks into audio/visual/animation format.

According to Harshil, even though COVID-19 has put the spotlight on remote learning like never before, pushing the e-learning market in India to grow rapidly, last-mile education has suffered in a big way. He recalls how unlike other edtech companies, eSense was out of business during the first lockdown, but that worked out well as a period for product development and strategy to enter the rest of India with CBSE schools as well.

“We now aim to disrupt the segment, and want to bring the focus back to the classrooms, and become a leader in the B2B edtech space in the next three years,” says Harshil.

“There has been no teaching since the first lockdown in some schools. Amongst our 4000 clients, not even 500 of them have Zoom licenses or other video conferencing licenses. So they have done absolutely nothing for the last 12-15 months,” he reveals.

eSense takes pride in its two products, TOPClass, its smart classroom offering, and TOPScorer, a self-study and homework app. According to Harshil, TopScorer became an attractive feature because it is made to provide last mile education in India. “You don’t need to have your device with you all the time, you don’t need any high-end devices and an active internet connection,” he says.

TOPScorer is a student app that provides digital course-packs for class 1  through class 10 for CBSE, Gujarat (GSEB) and Maharashtra (MSEB) boards.

Speaking about the learning curve in this space, Harshil explains that eSense has gone from strength to strength, and a lot of effort has been put while opening in any new city. “The case was always the same, first door you knock at, and you say I am from e-Sense, it’s an e-learning solution, it would take 30 days to make them understand the offering, and then pricing to execution. The sales cycle itself was almost five months for one client,” recalls Harshil. He adds that even now, the sales cycle remain unchanged.

“The only thing that has changed is what you do in those four-five months. First, it was lead generation, and now, these months are about explaining product innovation or product explanation,” tells Harshil.

In terms of how eSense’s offering has evolved, Harshil says, that from a very bare bones, digital content library, the content built in-house is mapped as per the curriculum. “It is line to line animation, covers every single element of the textbook in the same format that the textbook is giving, and we have grown to the level now that you can open the textbook on any page number, on any paragraph, and find that animation in the same line on the software,” he says.

“From being just plug and play, we now offer a dashboard where content can be stored, lesson plans can be created, questionnaires can be generated, and so on,” he adds.

“We have added features which enable teachers to add more resources as, post the Covid period, teachers would want more flexibility and control, and interactive tools,” says Harshil.

Competition and future of edtech

Harshil, who started as a management trainee in the company ten years ago, says that he has travelled extensively within the country, and realised that the way education is consumed at the bottom of the pyramid is extremely different from urban or fancy schools. Because in the hinterland regions, schools struggle with budgets, IT, and teachers who needs hand holding.

According to him, post-Covid education is not going to be different in state boards or schools catering to poor urban students. “They will be exactly the same. In fact, financially, they may face more constraints,” he says.

The edtech market has been dominated by two key players – BYJU’S and Unacademy. For Harshil, what sets eSense apart is its sole focus on teachers. “Our focus is how can they teach better, because, with this flood of edtech platforms, students are already burdened and fatigued,” he says.

“The truth of the matter remains that online schools are going to get offline. There is no internet available in the state school classrooms, which makes our last mile delivery and post sales service most important,” Harshil emphasises.

eSense provides a package of content, software, and hardware such as laptops and projectors on subscription basis to the schools. It works on a one-to-five year subscription model with schools, costing between Rs 1 lakh to 5 lakh per school per year. For apps such as TOPScorer, eSense charges schools per student, and the charges vary for the same, according Harshil.

Due to the pandemic, the company’s revenue dipped significantly in FY20-21 as compared to FY19-20’s Rs 21 crore. “However, we witnessed an exponential growth in TOPScorer (self-study/ homework app) adoption in our existing market – this presents a strong testimony to the conceptualisation of our product roadmap, underlining the need to ramp up edtech offerings in the school ecosystem,” says Harshil.

eSense was started with an initial capital of Rs 2 crore, and its parent company supported its operations and expansion so far. But now, Harshil says that eSense is looking to raise external funding to support its all-India expansion plan.

Speaking of the potential, he says as soon as eSense penetrates pan India, the doors automatically open for other state boards as well.

“The CBSE board, which is now the fastest growing board in India currently with an active market of around 16,000 schools, is growing at a CAGR of 10 percent. It is obviously then the most potential market segment for us. In the next three years, we are going to be present in CBSE as well as in at least 5-7 state boards with customised solutions for that state board,” he says.

“The idea is to become the number one B2B solution provider for India, and scale to 10,000 schools in three years from its present 4,000,” adds Harshil. The company aims to offer its solutions and platform to any kind of learning environment from schools.

How to Use Instagram Guides to Create Organic Engagement : Social Media Examiner

Show Your Social Media Team How Their Work Impacts Sales