When BenQ offered to send me a portable projector for review, I had some serious reservations. Projectors are, at the best of times, finicky beings. To use one, you need to consider ambient lighting conditions, the quality and cleanliness of your screen, projection technology, keystone correction, lens focus, and a host of other factors. You don’t just set down a projector in the middle of the room and hope for the best. 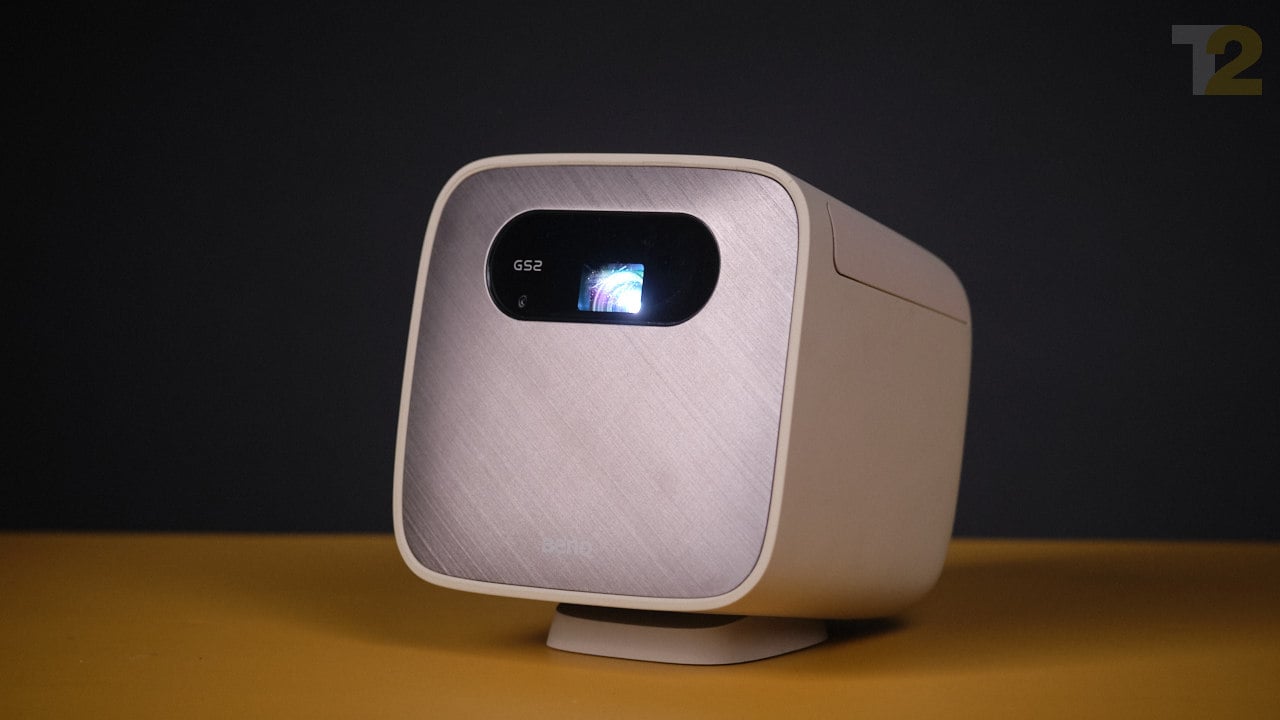 I like the design of the GS2, and if you’re looking for a portable projector, there probably aren’t very many options. Still, I think a large iPad is far more practical for any number of reasons. Image: Anirudh Regidi

With the GS2, though, that’s exactly what BenQ expects you to.

The GS2 is a relatively small, battery-powered projector that’s designed to work on any surface. You’re meant to toss it into a bag and carry it on a camping trip, because, you know, why commune with nature when you could carry a projector, a USB drive filled with movies, a tripod, a backdrop stand, and a screen, and watch movies around a campfire?

Now I did want to test this projector out in its element, but we’re in the middle of a pandemic. That didn’t mean I couldn’t find creative ways to use the device, however.

Projecting images on literally any surface is fun at first, but the novelty soon wears off. Image: Anirudh Regidi

This little cuboid is portable, which means battery power for up to three hours, and it has wireless connectivity with support for Google Cast and AirPlay. Together, this gives the GS2 a kind of freedom that one can only dream of.
Did I take it into the kitchen to watch a movie while doing the dishes? You bet I did. Did I take it to the bedroom and transform my white ceiling into a theatre-sized screen? I did that too. Bathroom? Check (I had to test the GS2’s IPX2 splash-resistance claims, you see). Living room? Check. Dining room? Check. Balcony? Check. The walls of the building opposite mine? I tried that too (the projector was, sadly, not powerful enough for this task).

You can bet that I converted every surface I could into a screen. I had fun with this expensive toy, but I honestly couldn’t find a reason to spend Rs 80,000 on it.

For one thing, while converting my kitchen walls and bedroom ceilings into a theatre was fun, the quality of the image leaves a lot to be desired. The GS2’s lamp is rated at 500 lumens, but the maximum I measured off a white wall with the projector positioned exactly 5 feet away was 60 lumens. I would consider 120 lumens to be adequate for indoor use.

720p is simply too low a resolution for a projector. Pixelation is quite prominent at distances of 5 feet and beyond. Image: Anirudh Regidi

The image is dull, and because of the 720p resolution, noticeably blurry. The sharp-eyed among you will even notice individual pixels being projected at 6 ft.

Out of the box, the projector is lacking sufficient contrast. Colour balance also tends towards cooler temperatures by default. Image: Anirudh Regidi

While the GS2 has a colour gamut of 85 percent sRGB, it’s in dire need of calibration. The most accurate setting I found was ‘User’ mode with the colour temperature set to warm. Without calibration, there’s a distinct blue tinge and a lack of contrast, which leads to a loss of detail in cluttered scenes.

For someone like me, who’s overly finicky about the quality of their displays, this was a deal-breaker.

I/O is generous and, I was pleasantly surprised to find, there’s support for 5 GHz WiFi and DisplayPort over USB-C. Image: Anirudh Regidi

In terms of functionality and features, the GS2 is well endowed. There’s support for 5 GHz WiFi bands, USB-C DisplayPort, a dedicated HDMI port, auto keystone correction, autofocus, and more. The mount is very stable and the base even tilts up and down by 15°. Google Cast and AirPlay worked brilliantly and many popular apps are already accessible in the UI – though PrimeVideo is notable for its absence.

For audio, you get support for Bluetooth headphones and speakers, a 3.5 mm line out, and integrated 2 W speakers that are loud enough for personal entertainment in a pinch.

Overall, the device is easy to set up and use.

Here’s the thing: At Rs 80,000, the GS2 isn’t cheap. For that price, you’ll get stunning 55-inch 4K TVs, high quality wired projectors, and for those who want portable entertainment, you have a selection of Apple iPads to choose from.

Other than portability and the option to project massive images on any surface, the GS2 doesn’t offer much. If the projected image was brighter, or perhaps the colours more accurate, the GS2 could have been more fun.

More importantly, in this post-COVID world of ours, I just don’t see where a portable, outdoorsy projector fits.

What it means and how it works- Technology News, FP

iPhone 14 is the most repairable iPhone Apple has made in years, shows teardown video- Technology News, FP

Govinda Aala Re! Mumbai gets adventurous with Dahi Handi