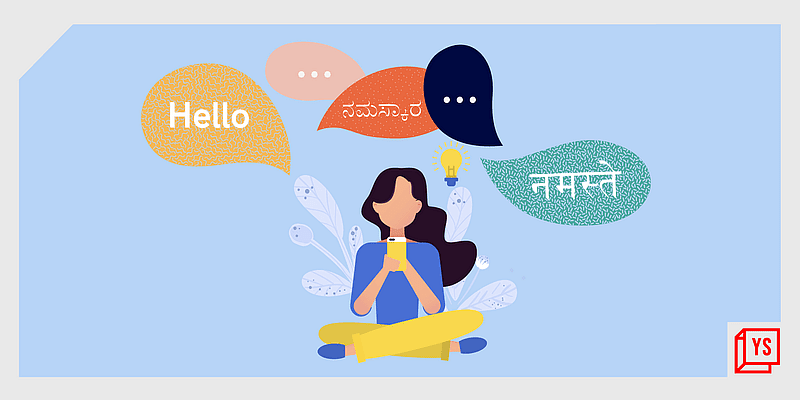 Several studies show that learning a new language can be beneficial for our brain, especially as we age. Learning new languages can help our brain process more information, making it more agile.

However, language schools, along with apps like Duolingo, often restrict themselves to teaching foreign languages like French, German or Spanish. India is home to 121 languages – 22 of them being official – and each has its own linguistic style, possessing a vast reserve of knowledge.

The app was launched in October 2021 by ﻿Multibhashi﻿, a Bengaluru-based edtech firm, and the Government of India. It teaches 22 official languages including Assamese, Kashmiri, Hindi, Dogri, Maithili, and Manipuri.

How does the app work?

After you download the app, it greets you with a tune played on the harmonium. The sign up requires entering your full name and mobile number, along with verification of the mobile number using OTP – which is easy and swift.

The tri-colour interface shows a list of the 22 languages that the app offers to teach. Bhasha Sangam’s default language of instruction is English but it can be changed to seven other languages, including Hindi, Gujarati, and Bangla.

The sign up requires entering your full name and mobile number, along with verification of the mobile number using OTP – which is easy and swift. Credit: YourStory Design

Having visited Kashmir and being fascinated by the culture, this writer chose to start learning Kashmiri.

Bhasha Sangam teaches the language by enabling users to master one category after the other. For instance, if you can answer correctly in the ‘Greeting’ category, then you would be promoted to ‘Small Talk’ and so on.

There are 20 categories – including Phone, Hobbies, New City, Distress, and Travel – which can be treated as learning levels.

In ‘Greetings’, you will learn how to say salutations like ‘good morning’, ‘good night’, ‘I am sorry’, and ‘happy new year, among others. These phases appear in English, which is the default instruction language until changed, and in Kashmiri, with an audio clip to understand the pronunciation. To learn, you would obviously have to repeat the phrase.

Bhasha Sangam does not get into details including the spelling or how you could learn to write your chosen language, while teaching these phrases. You could learn these words, without knowing how to write them or understand the language’s grammatical rules.

Bhasha Sangam teaches the language by enabling users to master one category after the other. Credit: YourStory Design

The app’s free lessons majorly provides you with tools to learn a few phrases, which could come in handy. In case you are looking for more guidance, Bhasha Sangam also offers live classes. Students can start by taking a demo class to try out the live session and then choose to opt for paid classes.

A single session starts at Rs 99, and goes up to Rs 15,999 for 90 classes. The classes are also divided into different levels, going back to traditional language learning methods.

Each level, in the free version, is peppered with a few tests. Correct answers could lead to the next level and completing all 22 levels gives you a certificate from the Government of India. This certifies the completion of your course.

Bhasha Sangam is an easy to use app. Its swift sign-in process, easy navigation, and minimal design can work well for users.

The language offering is also comprehensive as it touches all regions of the country. For instance, you can master Malayalam if you’re planning to move to Kerala – no matter where you live.

This ties up with Bhasha Sangam’s purpose, which is to enable easy learning of Indian languages. However, the app only offers its users a few phrases in the free version.

Also, this writer would have liked to learn how to write the words, understand the language’s alphabet, as well as learn grammatical rules required for making a conversation, however, the app didn’t have the features for the free version.

This is different from LingoDeer– which actually teaches users how to write letters and words, and also focuses on grammar– while teaching Korean and Japanese, among other languages.

To actually master a language on Bhasha Sangam, you would have to opt for the paid courses where a teacher would be able to clarify these doubts for you. But if you are living in a state across India and don’t know the local language, Bhasha Sangam can be of great help.

The promising future of the Indian wellness industry

How Much Equity Should You Dilute?