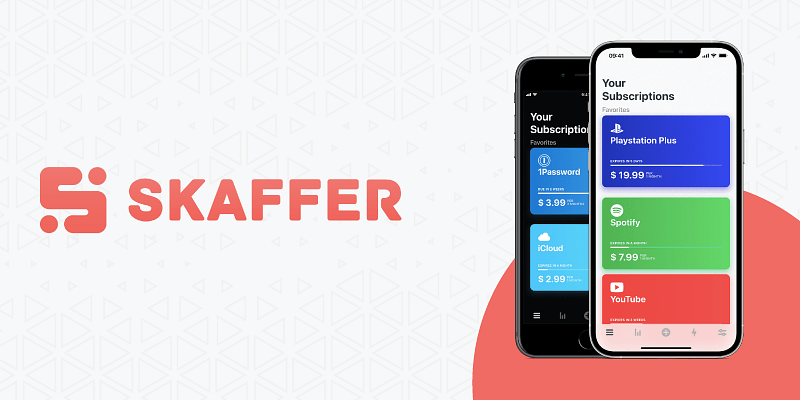 With news, sports, music, movies, gaming, fitness, storage, and sundry internet services rapidly going behind the paywall, subscriptions have become the order of the day. Average subscriptions per user are growing everywhere.

While subscriptions are great for the internet economy, they often pose challenges at the user’s end. From forgetting to cancel free trials to missing payments to subscribing to the same service more than once (via different ids) — tracking, managing, and renewing subscriptions can be quite a task. More so, if your interests are diverse, and/or your subscriptions cater to both work and leisure.

Skaffer hit the Apple App Store in June 2020, and has notched up a 4.7 rating. It is compatible with iPhones, iPads and iPod Touch, and needs iOS 13 or above.

Skaffer features and what it solves

Skaffer lets you take control of all of your subscriptions on a single screen.

The utility app helps you trim down subscriptions, manage recurring expenses, save money with timely reminders to cancel services that are nearing renewal, unsubscribe after expiry of trial periods, and even schedule flexible reminders for a single subscription at any time.

You can add, track, and manage a tonne of subscriptions across categories, including:

At present, Skaffer lists over 100 service providers on the app, and is adding more every month. If your favourite service is missing, there’s an option to leave a request on the website, and it will be made available as soon as possible.

Users can unlock additional features with a Skaffer Pro subscription, which can be availed for a one-time fee of Rs 269 in India, and $2.99 in the US. You can change the currency depending on your location.

The Skaffer Pro plan also allows family sharing for up to six members.

Plus, there is seamless iCloud synchronisation that lets you manage subscriptions from any of your devices. You can look at service-wise subscription stats, including price, currency, cycle (monthly, quarterly, semi-annual, annual), last bill and next bill dates, reminder frequency, and options to ‘cancel’ or restore.

All upcoming reminders can be viewed in one place through the Settings tab. You can add subscriptions to ‘favourites’ using the Options menu, and those appear on top of the homepage.

Favourites will always be displayed on top of the list. Skaffer also lets you reorder subscriptions on the homepage using a simple Drag and Drop function, and even disable auto renewals and/or archive subscriptions for later use.

Skaffer is a useful, timely, and a well-designed addition to the world of productivity apps. For an increasingly time-poor population, it is the perfect addition to smartphones, especially because it needs no more than 5MB space.

Skaffer works continuously in the background, and intervenes only when it has to nudge the user towards an action — renewal or cancellation.

It also enables users to understand their internet spends and consumption behaviour better with detailed stats on each service they have subscribed to.

Skaffer scores high on concept and execution, but its growth will be determined by its ability to move fast, localise, and customise across markets.

As an Indian user, Skaffer could feel a bit limiting because of the dearth of local apps and services like HotStar, SonyLIV, Gaana, JioSaavn, MX Player, bb Star, homegrown learning apps, and so on.

However, all global services that are available in India can be managed on Skaffer.

Add to that, bite-sized pricing plans for Skaffer Pro, where users can pay-per-service instead of doling out a bulk amount, would be good.

That apart, Skaffer is a nifty tool to tackle the big bad world of paid apps.

This entrepreneur thought his enterprise was going bankrupt and known as it Desastre Café. Right now it’s a standard espresso store in CDMX.

How Does Google Voice Work?

FM Says Window To Be Left Open For Crypto

ConverseNow is targeting restaurant drive-thrus with new $15M round – TechCrunch

Low-code focused OutSystems raises $150M at a $9.5B valuation – TechCrunch