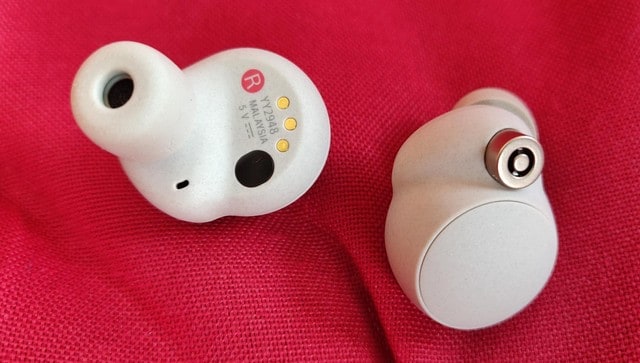 More than five quarters have passed since we got our hands on the Sony WF-1000XM3 TWS earphones that impressed one and all. It is time to make way for its successor that promises improvements on every front. While I was expecting it here around Diwali, it has finally reached our shores this year; better late than never. Let’s meet the Sony WF-1000XM4 noise cancelling true wireless (TWS) earphones and look at the enhancements it brings to the table in the premium personal audio segment. The design has drastically changed since the XM3, and while the XM4 buds don’t look generic, they look, well, more normal.

The design has drastically changed since the XM3, and while the XM4 buds don’t look generic, they look, well, more normal. Though these buds are 10 per cent smaller than their predecessors, they are still quite chunky. The build quality is solid with a smooth matte finish and sizable touch zones at the back of the buds. The charging case here is significantly smaller; 40 per cent smaller than XM3’s to be specific as per the company, and weighs almost half.

You get two colour variants in the Sony WF-1000XM4 – black and grey, and we got the latter for review. The black looks slightly better in my opinion, but then I belong to Bruce Wayne’s ‘does in come in black’ school of design, so decide for yourself. You have a silver ring around the microphone vents that breaks the design monotony in a good way. The charging case is draped in the exact grey shade and has a USB-C charging port at the back and a multi-coloured charge status LED at the front.

Despite the larger footprint, the earbuds are fitted with a 6 mm driver and weigh under 7.5 grams each. The larger earbuds shells here are probably necessitated by the amount of advanced circuitry they hold, starting with Sony’s V1 processor. It not just takes care of the active noise cancellation (ANC) but also supports LDAC codecs over Bluetooth 5.2 with a maximum throughput of up to 990 Kbps. These earphones also support AAC and SBC codecs in case the source device isn’t LDAC compliant.

The earbuds are touch enabled and let you perform a handful of tasks using single tap, double tap and triple tap gestures. The functions can be reconfigured using Sony’s Headphones Connect app. Unlike its predecessor, the XM4 comes with ingress protection with a modest IPX4 rating for the buds making them sweat resistant. They should be able to survive the odd splash too, but don’t push your luck too far. You get wear detection sensors to pause the audio when you remove the buds from your ear, and resume when you put them back on. The earbuds are touch enabled and let you perform a handful of tasks using single tap, double tap and triple tap gestures.

Despite their relatively larger size, the earbuds fit into the ears reasonably well and you don’t feel any discomfort. However, they tend to stick out of the ears a bit. The bundled foam eartips provide good passive noise isolation. While the seal is quite good, the fit isn’t the most reassuring, especially when you wear them for a jog. You constantly feel like they may pop out of the ear, but to their credit, they didn’t.

You get three pairs of eartips in the bundle including the preinstalled mid-sized tips. Do spend a couple of minutes choosing the right size as that helps in achieving better noise cancellation. The companion app also lets you decide the right size for you.

Let’s start with the wireless range. The connection stays strong for a little over 10 metres with a clear line of sight between the buds and the source device, and up to 6 metres even with a concrete wall in between. That’s an impressive range  given that I was using them with LDAC codecs with sound quality being the priority. Pairing the XM4 with a different device can be slightly tricky if you don’t read the manual. They simply won’t appear in the list of devices unless you touch and hold both buds for a few seconds to get them in pairing mode.

The Sony WF-1000XM4 supports three listening modes – Noise Cancellation On, Ambient Sounds On and Normal mode (ANC/Ambient Sounds Off). You can choose any two or all three from the Headphones Connect app. You can toggle through them by tapping the left earbud once. The quantum of ambient noise that you want them to let in can be finetuned from the app too, along with accessing other audio settings like equalisers, DSEE Extreme audio upscaling and 360 Reality Audio setup. You get three pairs of eartips in the bundle including the preinstalled mid-sized tips. Do spend a couple of minutes choosing the right size as that helps in achieving better noise cancellation.

The app also lets you program the touch controls, however, just like in case of the XM3, the options are available in sets, and one cannot choose individual functions for each gesture. For instance, if you select Playback controls for the right earbud, a single touch will be assigned to Play/Pause function, double tap for next track and triple tap for previous track. You cannot change that. That leaves you with a choice between volume control or ANC toggle for the left bud, but not both. I was hoping that Sony would have changed this by now, but alas!

Time to talk about the sound quality. The Sony WF-1000XM4 is sufficiently loud at 60 to 70 per cent volume level for most things. The sound output of the WF-1000XM3 was one of the finest I had heard on TWS earphones, and if anything, the WF-1000XM4 takes the audio quality a notch higher. The sound signature isn’t perfectly neutral, and in fact there is a clear bias in favour of low end frequencies, resulting in a pleasantly warm sound. But the bass isn’t overdone to a point where it masks other frequencies, primarily the mids. But there’s ample punch in the sub-bass that is thoroughly enjoyable.

The mids are reproduced very well with clear vocals and good instrument separation. The highs are sharp with ample sparkle, yet perfectly tempered so as not to sound sibilant, and the overall detail in sound is excellent. There is very little to complain about in the imaging department, and the sound stage is as broad as it gets on TWS buds. Most popular genres of music sound good on the Sony WF-1000XM4, and thus it is bound to appeal to a broader audience, but with deeper pockets. I used the LDAC codec throughout the course of testing.

The active noise cancellation was excellent on the Sony WF-1000XM3 and it continues to be as good, if not better on the XM4 too. It remains arguably the best ANC I have experienced on TWS earphones. It cuts down on a lot of ambient noise like the whir of a ceiling fan or the buzz of traffic when outdoors and lets you enjoy your music peacefully. The ambient mode here is quite effective when you need to be aware of your surroundings (while crossing the road or listening to announcements) or need to have a quick conversation with someone in the room without taking the buds off. The sound quality remains equally solid in all three modes. Sony claims a battery backup of 8 hours for the buds on a full charge and a total of 24 hours with the charging case.

The call quality of the WF-1000XM4 is more than decent but not exceptional. You will hardly face a problem when indoors. The person on the line was clearly audible, and I was heard with ample clarity by the other person too. But when you step outdoors, the microphones do pick up some ambient noise that the person on the line complained about on and off. I expected a little better here given that this is a premium product.

Sony claims a battery backup of 8 hours for the buds on a full charge and a total of 24 hours with the charging case. During my testing, I got a little under seven hours out of them with ANC switched on more than half the time. The case can recharge these buds twice more, thus taking the total battery backup upwards of 20 hours, which is pretty good. Generally, I would term 20 hours as decent or above average, but given that I was using LDAC codec all the time and there was also a generous use of ANC, 20 hours here is an achievement.

The battery status of each earbud as well as the charging case is visible in the companion app, and it also prompts you when the charge on the case drops below 30 per cent. It takes about 90 minutes to charge the buds and case fully using a standard USB-C charger. Sony also claims that 5 minutes of charging can give you about an hour of music playback; a handy feature to have. The case also supports Qi wireless charging. The connection stays strong for a little over 10 metres with a clear line of sight between the buds and the source device, and up to six metres even with a concrete wall in between.

The Sony WF-1000XM4 TWS earphones can be purchased for Rs 19,990 with a one year warranty; exactly the same price the XM3 was launched for. Yes, it is expensive as expected, but the performance is definitely a cut above anything we have come across south of Rs 20,000, and flaunts arguably the best active noise cancellation among TWS earphones available in India. Add to that support for LDAC codecs, a good companion app and impressive battery life.

The XM4 is not necessarily a ‘one product to rule them all’. Its design may not appeal to the fashionistas or its output to the purists seeking neutral sound signature. But the sound quality is impressive with a warm and detailed output that will appeal to a broad audience, and even better than that of the Apple Airpods Pro.

Call quality needs a bit of improvement, especially in noisy outdoor environments, and the ability to assign specific functions to touch gestures would be good to have. And yes, the price will serve as a deterrent for many. But when it comes to pure sound quality and ANC, the Sony WF-1000XM4 is hard to beat.

Why are Hasselblad and Leica cameras so expensive and why do people still buy them- Technology News, FP

IFF flags IT Ministry’s letters to Twitter on manipulated media policy as having ‘no legal basis’- Technology News, FP