Spacewalking astronauts ventured out Sunday to install support frames for new, high-efficiency solar panels arriving at the International Space Station later this year. NASA’s Kate Rubins and Victor Glover put the first set of mounting brackets and struts together, then bolted them into place next to the station’s oldest and most degraded solar wings. But the work took longer than expected, and they barely got started on the second set before calling it quits. Rubins will finish the job during a second spacewalk later this week. 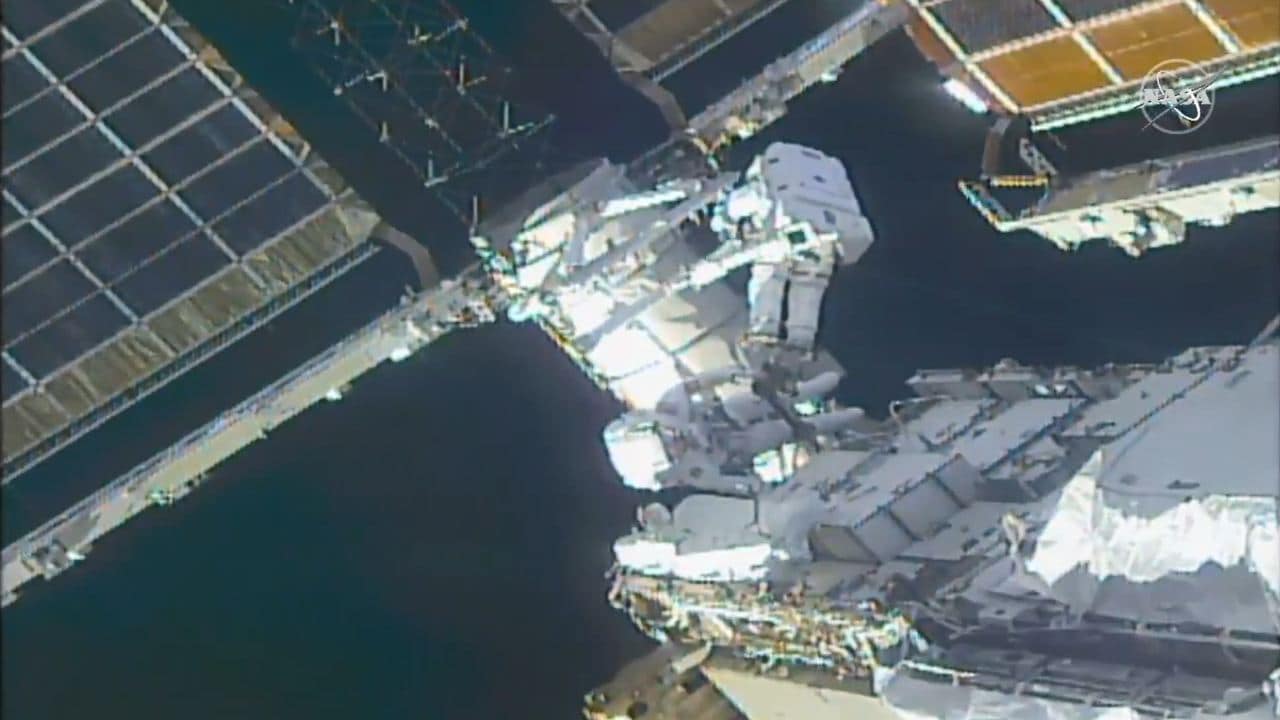 Spacewalkers Victor Glover and Kate Rubins are pictured at the mast canister, installing bracket support struts to the base of the solar array on Feb, 28th 2021.Image credit: NASA

The spacewalkers had to lug out the hundreds of pounds of mounting brackets and struts in 2.5-meter duffle-style bags. The equipment was so big and awkward that it had to be taken apart like furniture, just to get through the hatch.

Some of the attachment locations required extra turns of the power drill and still weren’t snug enough, as indicated by black lines. The astronauts had to use a ratchet wrench to deal with the more stubborn bolts, which slowed them down. At one point, they were two hours behind.

“Whoever painted this black line painted outside the lines a little bit,” Glover said at one particularly troublesome spot.

“We’ll work on our kindergarten skills over here,” Mission Control replied, urging him to move on.

As astronaut Kate Rubins continues work to secure a bolt on the bracket support structures at the base of the solar arrays, the @Space_Station is flying 261 miles over Venezuela and is about to pass over Brazil. pic.twitter.com/zTcPxaplEX

With more people and experiments flying on the space station, more power will be needed to keep everything running, according to NASA. The six new solar panels — to be delivered in pairs by SpaceX over the coming year or so — should boost the station’s electrical capability by as much as 30 percent.

Rubins and Glover tackled the struts for the first two solar panels, due to launch in June. Their spacewalk ended up lasting seven hours, a bit longer than planned.

“Really appreciate your hard work. I know there were a lot of challenges,” Mission Control radioed.

The eight solar panels up there now are 12 to 20 years old — most of them past their design lifetime and deteriorating. Each panel is 34 meters long by 12 meters wide. Tip to tip counting the centre framework, each pair stretches 73 meters, longer than a Boeing 777′s wingspan.

Boeing is supplying the new roll-up panels, about half the size of the old ones but just as powerful thanks to the latest solar cell technology. They’ll be placed at an angle above the old ones, which will continue to operate. A prototype was tested at the space station in 2017.

Sunday’s spacewalk was the third for infectious disease specialist Rubins and Navy pilot Glover — both of whom could end up flying to the moon.

They’re among 18 astronauts newly assigned to NASA’s Artemis moon-landing program. The next moonwalkers will come from this group.

.@VP placed a special phone call to space when she spoke with astronaut @AstroVicGlover, currently aboard the @Space_Station. Watch the exchange in celebration of #BlackHistoryMonth: pic.twitter.com/6CffeSd9ZQ

“The history-making that you are doing, we are so proud of you,” Harris said. Like other firsts, Glover replied, it won’t be the last. “We want to make sure that we can continue to do new things,” he said.

Rubins will float back out Friday with Japanese astronaut Soichi Noguchi to wrap up the solar panel prep work and to vent and relocate ammonia coolant hoses.

Glover and Noguchi were among four astronauts arriving via SpaceX in November. Rubins launched from Kazakhstan in October alongside two Russians. They’re all scheduled to return to Earth this spring.