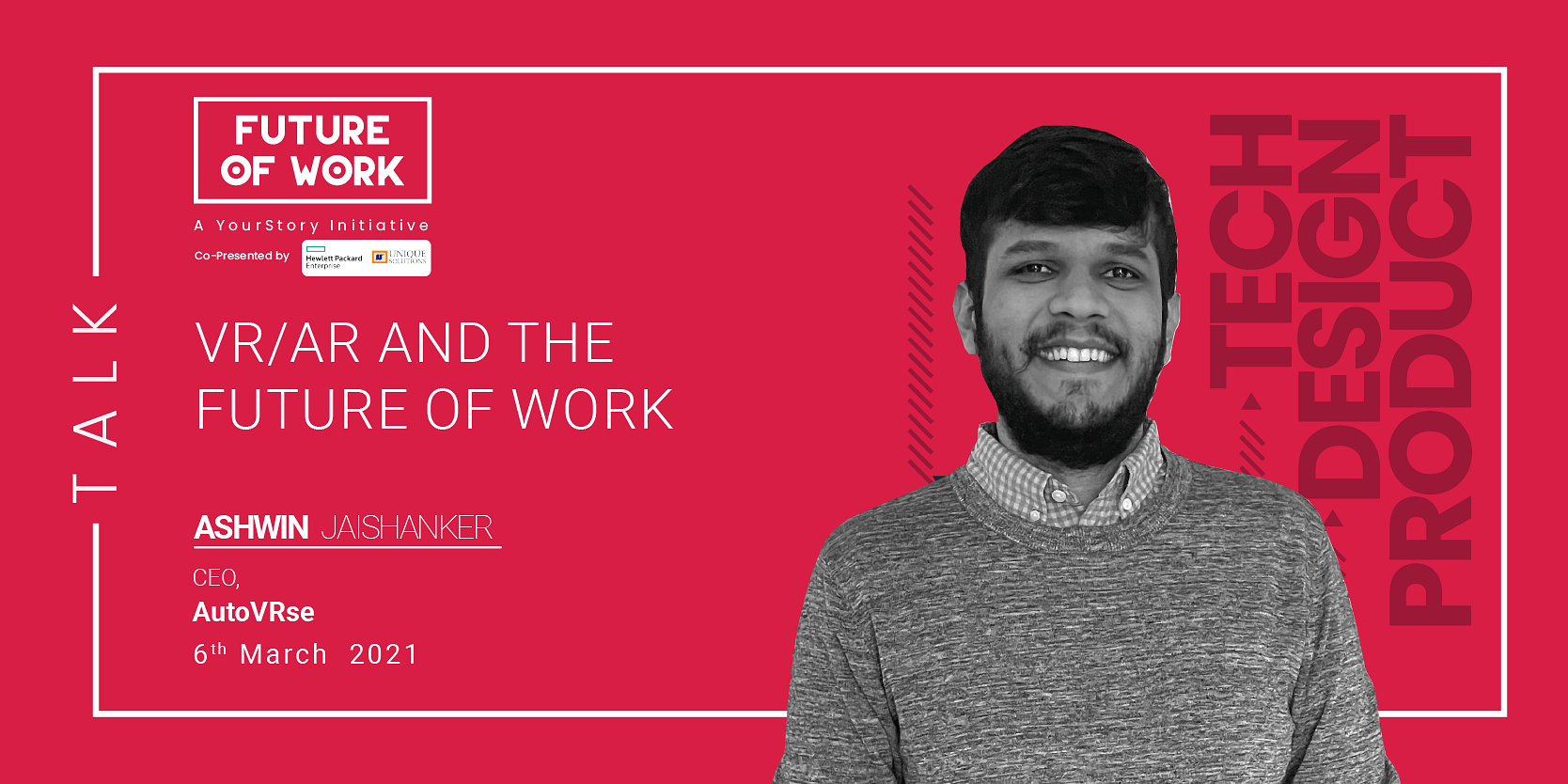 Augmented Reality (AR) and Virtual Reality (VR) will revolutionise the way humans interact and communicate with each other, said Ashwin Jaishanker, CEO of Bengaluru-based AR/VR startup AutoVRse, while delivering a talk on Day 2 of the fourth edition of the Future of Work summit.

According to a report by Statista, the global AR, VR, and mixed reality market is forecast to reach $30.7 billion this year and rise close to $300 billion by 2024.

Ashwin said that AR/VR has revolutionised everything, including the way we design and work. Some of the key trends he highlighted while speaking about ‘VR/AR and the future of work’ include:

Utilising technology at the planning stage

Within the realm of an enterprise, AR and VR technologies help companies and founders visualise and articulate their goals and vision, said Ashwin. He gave an example of the design and architecture industry, wherein a virtual reality literally allows designers and architects to “walk inside their designs”.

Ashwin also spoke about automobile designers who have been using clay models while designing and developing cars, which is an expensive and tedious affair. “These take a lot of time and money, but with AR and VR, you can swing your arms and create something in thin air.”

Ashwin highlighted how this technology is gaining popularity in the manufacturing sector, and said, “A lot of factories are creating 360 virtual tours of their space. This will help the person building it walk through the entire factory, understand the processes better, and ultimately bolster better decision-making.”

One of the things highlighted by Ashwin was the dynamic and expansive scope of AR and VR across multiple sectors, including the entertainment and gaming industries.

He said, “Hollywood uses AR and VR a lot. They help in deciding camera angles and a host of other things even before the shooting starts.”

The visualisation tools of these technologies help in tracking progress, taking the right measurements, and can even help in planning the future better.

Ashwin said that these technologies are most useful in DIRE situations – an acronym for dangerous, impossible, rare, and expensive.

“It is very hard to prepare an individual or a company for a rare event like a fire, earthquake, etc. There is no way you can predict emergency situations,” he said.

Ashwin gave the example of a project he worked on for Netherlands-based oil and gas giant Shell, where they developed techniques and tools using VR to mitigate fire in their plants.

AutoVRse has also aided automotive companies by building a VR software that can be deployed at the design stage, as well as at key customer touchpoints such as the showroom.

Ashwin also spoke about a project he did for Australian wine company Jacob’s Creek, where the products could be scanned from the website with the help of a QR code, and the same could be placed on an individual’s dining table or to get an idea of the look and feel.

Ashwin said he is very bullish about the utilisation of AR and VR technologies in the ecommerce industry.

“The time is not far when they are going to become a staple on every ecommerce website. For example, while shopping, you can place a handbag next to you and see if it matches your outfit.”

However, one challenge that he pointed out before concluding the session was the need to come up with lighter and more comfortable hardware while deploying AR and VR.

“A lot is happening in this space and it is gradually gathering momentum,” he said.

With funding depleting, is the Indian startup ecosystem going from boom to bust?

The investor input – a discussion on the future of data protection

Exploring the opportunities and challenges the sunrise sector offers

MakeMyTrip to increase size of all-women team of holiday experts