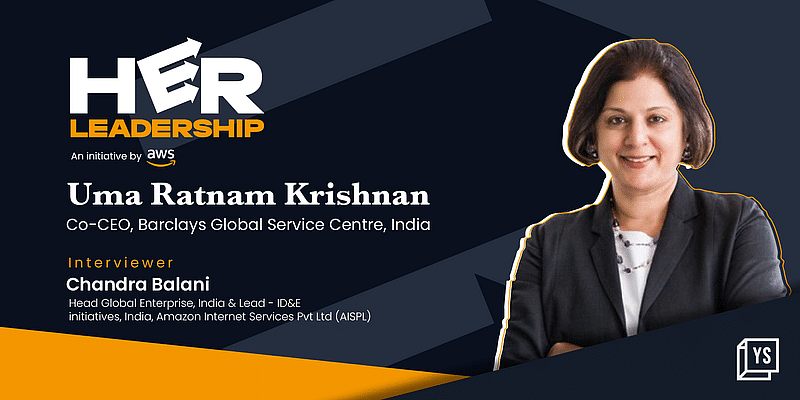 Uma Ratnam Krishnan started her career as an Indian Diplomat after getting selected in the Indian Foreign Services, an experience which was not only rewarding but also helped her embrace diversity at the start of her career.

Taking up corporate roles later, Uma has been quite a trailblazer in her professional journey. While she has been a banker for most part of her professional life, a short spell in the tech sector has been one of her biggest learnings. “My stint in tech helped me learn technology when it hadn’t taken over the world as it has today,” she proudly says, speaking with YourStory in the opening episode of season two of the ‘HER Leadership’ interview series.

Powered by AWS, the conversation was steered by Chandra Balani, Head Global Enterprise India & Lead – ID&E initiatives, India, AISPL. The ‘HER Leadership’ interview series captures stories of struggles and success of country’s most successful and prominent enterprise business leaders, and hopes to become a platform that inspiries lots of girls and women to join and move ahead in the workforce.

An eternal learner, Uma believes that learning is an ongoing process for growth and wholeheartedly advocates constant learning as well as unlearning on the job. Having excelled in many leadership roles, she explains that the ability to learn and unlearn has been the key to transition smoothly in all her roles.

Coining the term ‘listening lab’, Uma says that she always makes it a point to spend the first 30 days in a new organisation actively listening and learning from her new colleagues.

She also stresses on having the right attitude to unlearn what you already know and reboot to fit your new role. With the ever changing technology, learning and unlearning in a constant loop plays a major part in being the force to drive change.

“It keeps me curious, agile, and interested,” she shares on how she takes out time to study and learn something new every few years.

Coming from a family of judges and lawyers, Uma was unaffected by gender biases. “Lack of having biases helped me not have fetters where you feel you couldn’t do something,” she says.

In fact she learned early on that one must always push to their potential and give it their best shot at whatever they try their hands on. Always taking the bull by the horns, Uma loves taking on the difficult and proving her mettle. Talking about her selection in the Indian Foreign Services, she shares, “I had read in a magazine that the IFS examination was very tough. So I just had to give it a shot, and I made sure I gave it my best and cracked it.”

Uma firmly believes that technology is the fundamental engine driving every business. With technology enabling customers and businesses to accelerate growth, be agile in the market and make integrations easier, Uma proudly talks about RISE – the innovation entity of Barclays.

A global community of the world’s top innovators working together to create the future of financial services, RISE operates fintech hubs across the world. “We want to give our colleagues the opportunity to start thinking about innovation while working in a large organisation such as ours,”​​ she says.

As the Co-CEO, BGSC India, at Barclays, one of the most prominent aspects of her role has been to build a distributed global leadership, with a significant presence of the India Hub.

Leading from the front, she encourages her team to take ownership for outcomes, challenge the usual way things are done, and bring about positive changes. “If each individual can challenge and empower their teams, the power of what you can unleash can be quite dramatic,” she asserts.

Talking about women’s participation in senior leadership roles, Uma agrees that while many progressive companies are helping in bringing about diversity, there’s still a long road ahead. However, being a working mother herself, she also points out that the process of inclusion will not be a cakewalk.

“Women will have to make this choice and recognise it won’t be a smooth road, sacrifices and choices will have to be made. Only then we have a much better chance to make it happen and have women in senior leadership roles,” she explains.

Proud of her optimistic attitude in life, as a parting note she shares her life motto and favourite quote by Maya Angelou, “My mission in life is not merely to survive but to thrive with some passion, some compassion, some humour, and lots of style.”

Meet Desi Wander Women , a trio of friends looking for their next adventure

Busting myths about the Customer Support Function, Atlassian’s Divya Sharma gives an insight into her career

Chennai-based startups that are reimagining the SaaS industry

AIIMS chief warns against going for CT scan in mild COVID cases, says it may do more harm than good