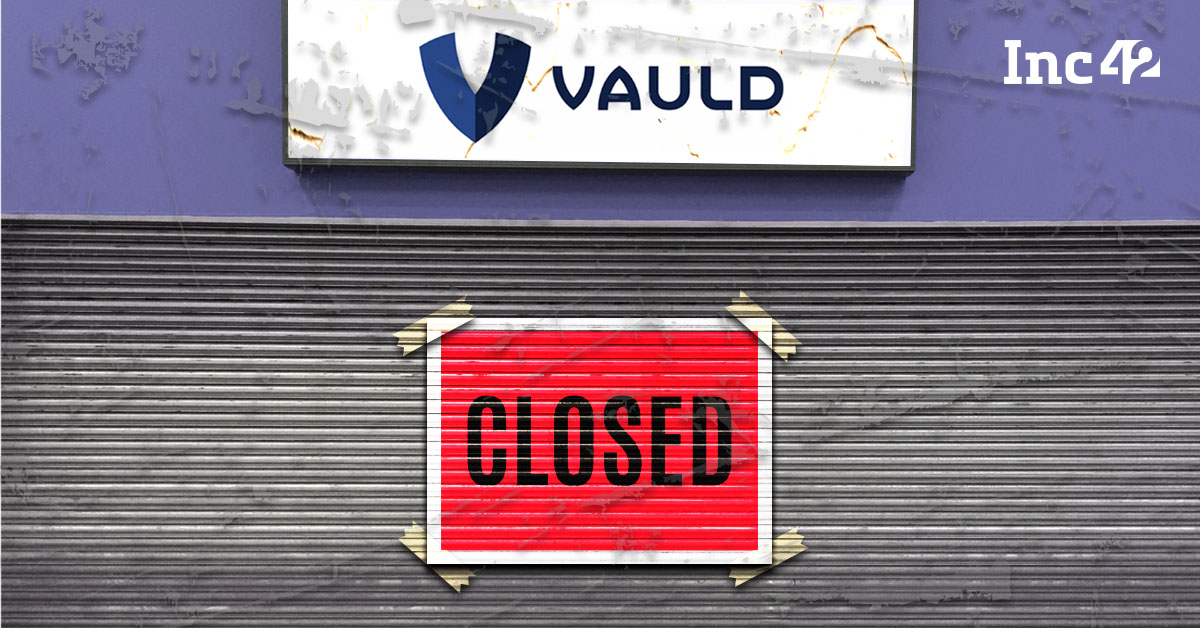 Of 8 Lakh Vauld users, about 75% were Indians, but they accounted for just 10% of its AUM, a former employee of the company said

The crypto startup was also planning to launch its own token, sources told Inc42

A 12.68% APY on crypto-assets was too good to be true and might not have been sustainable in the long run, experts say

What Lehman Brothers did to the mainstream global economy in 2008, TerraUSD (UST) might have done to the worldwide crypto market. But the third-largest stablecoin by market cap failed to maintain its dollar peg stability and slumped to $0.000099 in May this year. The UST nosedive affected the prices of other cryptocurrencies, sending the crypto world into a severe tailspin.

It could not have happened at a worse time. After being in the red for nearly two months, some of the biggest crypto companies started to fall like a house of cards. Globally, the crypto market cap slid by almost $1 Tn in the past three months. What initially appeared to be a market downturn is turning out to be a recession across the crypto ecosystem.

Looking at the aftermath linked to the Terra fiasco underlines the reality of crypto winter. For example, Three Arrows Capital, or 3AC (AUM: $10 Bn as on March 1, 2022), a prominent crypto hedge fund based in Singapore, and New Jersey-based crypto asset management firms Voyager Digital (AUM: $7 Bn in November 2021) and Celsius (AUM: $12 Bn in May 2022) filed for bankruptcy under different chapters.

The next to go down was Vauld, a crypto lending platform operated and managed from India. Although the company is headquartered in Singapore and registered there as DeFi Payments Pte Ltd, it did not lack credibility and raised about $27 Mn via seed stage and Series A funding from Peter Thiel’s Valar Ventures, Coinbase Ventures and Pantera Capital, among others.

But on July 4, the startup suspended all trading, withdrawals and deposits, citing ‘financial challenges’ due to massive withdrawals since June 12. This has reportedly affected about six Lakh crypto investors from India.

In an email dated July 11, cofounder and CEO Darshan Bathija told investors the company had applied to a Singapore court for a moratorium. This would give the management some breathing space to prepare for a business restructuring to safeguard the interests of all stakeholders. Vauld has also reduced its workforce by 30% since June 2022.

This did surprise many investors as the company said in June that it had no exposure to 3AC or Celsius. But post the TerraUSD meltdown, its assets have been valued at $330 Mn while liabilities stand at $400 Mn, a net deficit of $70 Mn.

A couple of developments have come up at Vauld since its operational halt in July.

First, the company is in talks with London-based crypto lending platform Nexo. The latter said it would acquire the startup and reorganise future operations to accelerate its presence in Asia. However, the deal has not been closed yet. Secondly, Vauld is said to be developing its own token, according to Inc42 sources.

Vauld has filed for creditor protection to the Singapore Court to keep operations under Section 64 of Singaporean bankruptcy law, free of any lawsuit. The hearing is scheduled for August 1, 2022. Meanwhile, some of the creditors have turned hostile and have sent demand letters to the company.

Aiming To Be A Customer-Centric Crypto Bank, Vauld Offered 12.68% APY

Unlike many crypto startups operating in India, Vauld aimed to be one of the most customer-centric crypto banks and built a comparatively new product, adding lending and borrowing features apart from trading.

“Undoubtedly, it was one of the most product-oriented crypto startups in the country and onboarded some of the best developers for the job,” a former employee told Inc42 on the condition of anonymity.

Be it a crypto-backed credit card or an API suite for trading or lending, Vauld’s UI and UX were much better than other crypto companies, he added.

Investors from India and abroad were further attracted as Vauld offered a 12.68% annual yield on TerraUSD and 6.7% on bitcoin.

Besides, it provided 24×7 customer support, two-factor authentication and a professional crypto custody provider. “Even Celsius used to offer support services only during business hours, but Vauld made it 24×7,” said the person quoted above.

By the time the crypto startup suspended its operations, it had more than 8 Lakh investors on board.

A blow-by-blow analysis makes it amply clear that the plummeting TerraUSD, played a major role in sinking crypto companies like 3AC, Celsius and Vauld. What’s more, all three failed to take proactive measures in time, leading to sudden and huge net deficits – $1.2 Bn at Celsius and $70 Mn at Vauld.

In fact, the way TerraUSD (UST) operates has already raised a few eyebrows regarding the authenticity and ethicality of the entire mechanism. For instance, can a stablecoin be truly ‘stable’ if a sister token is used to retain its UST value? You got it right. Terra used a reserve of its LUNA tokens to do just that. Simply put, it is an arbitrage system wherein LUNA tokens can be converted to UST and vice versa to control the UST pricing.

Or think of Anchor Protocol’s promise to pay a 20% APY. 20% yield on TerraUSD. Is that even mathematically viable?

These are fundamental issues, but most crypto platforms continued to trade in TerraUSD (UST) without looking into these basic questions.

We also witnessed a snowball effect when 3AC, which had purchased Terra assets worth $560 Mn from Voyager Digital, went bust. The hedge fund failed to pay its total dues of $670 Mn, and Voyager, too, had to file for bankruptcy.

As for Vauld, the lack of investor trust added to its ‘Terra’ woes as investors withdrew $197 Mn in June alone post the stablecoin crash. As early as June 15, some users told Inc42 that they had issues with withdrawals and the company had stopped paying interest for the last two weeks.

It was the beginning of the end.

The crypto winter has set in since December 2021, and most crypto startups have gone lean to survive the downturn. In contrast, Vauld seemed unfazed about the market situation, announcing the future launch of multiple products and hiring people. The company actively recruited developers and software engineers until May 2022.

“By April-end, we had clear indications that the market would go down. Vauld could have been more proactive by going lean and suspending recruitment plans,” he said.

“It should have seen the red sign, but Vauld did not heed it. So, a spate of late lay-offs did not help the company,” the source added.

In brief, the company failed to read the change from bull to bear.

The Imbalance In Market Equation

Of the 800,000 investors onboarded by Vauld, about 75% were from India, but they accounted for just 10% of the AUM. Further, there was a drastic difference in the company’s promotional and marketing activities, said another former employee.

“The quest is who all you want to cater to. Vauld has always maintained that its products are for the global market and do not target the Indian market specifically. But most of its users were from India. Therefore, Vauld’s promotional activities loosely focused on the Indian market. Barring a few social media influencers like Mariah Monetize, most influencers like Booming Bulls, Seeken, Akshat Srivastava, Shivam Chhuneja, Ankur Warikoo and many others were primarily addressing Indian consumers,” a former employee said.

While Vauld’s marketing strategies were confusing, it also failed to diversify its product offerings so that the company could continue with trading and other revenue channels if lending failed. As the latter was never the focus, said the person quoted above.

For a majority of investors, the bigger question is now, will the damage in India be limited to Vauld only, or will this ‘Crypto’s Lehman event’ coupled with crypto winter as well as new tax regulations afflict other crypto entities too!

With TNW 2022 around the corner, a look to the future