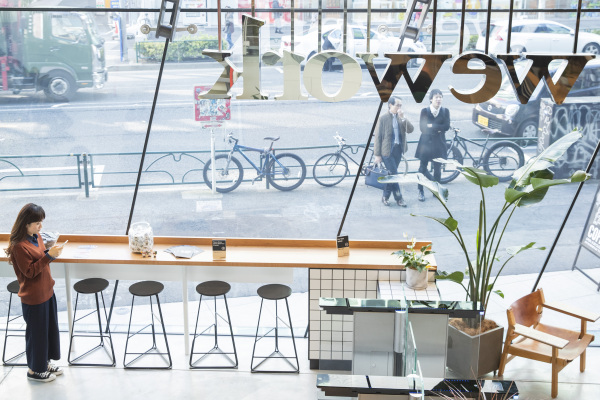 Blind has carved out a unique niche in the social-networking world. It’s an app of verified, pseudonymous employees talking to each other about what’s going on at their employers, trading notes on everything from layoffs, to promotions, to policies. Part LinkedIn, part Reddit, part Slack — it’s become widely popular among tech workers at Silicon Valley companies, and even outside the tech industry, with 5 million verified users.

Workplaces have changed dramatically post-COVID-19, with remote work becoming more of a norm, and that has made Blind indispensable for many workers who feel increasingly alienated from their companies and their colleagues.

The company announced this morning a $37 million Series C funding round led by South Korean venture firm Mainstreet Investment along with Cisco Investments and Pavilion Capital, a subsidiary of Singapore sovereign wealth fund Temasek. The company had filed a Form D in late March for roughly $20.5 million, and the $37 million represents the final total fundraised.

We last did a deep dive in the company back in 2018, so what’s changed? Well, first, there’s the pandemic. Co-founder and general manager Kyum Kim says that Blind’s users are now coming to the app all throughout the day. “Usage used to peak during the commute times,” he said. “8-10 AM before COVID and then after work, 7 PM-10 PM was another timeframe that people used to use Blind a lot. But now, it has kind of flattened out [throughout the day].” The new peak is 2 PM, and, according to Kim, users are logging in 30 times per month over about 13-15 days.

This gets to the first of two areas where Blind is experimenting with revenue generation. As remote work has taken hold, particularly at tech companies, internal messaging channels have become less valuable as sources for clear information from executive leadership. Blind believes it has a better pulse on how employees are feeling about policies and their employers, and is building tools around, for example, pulse surveys to give HR teams better insight than they might get from other services.

“People are just more honest on our platform versus these company-sponsored channels,” Kim said. We’re “probably the only platform where people are coming voluntarily, have visibility into their intentions, how they feel about their company’s policies.” Blind wants to protect the identities of its users, while also offering aggregate insights to companies.

To that end, last week the company brought on Young Yuk as chief product officer. Yuk had been an advisor to Blind for the past four years, while daylighting in senior product roles at Intuit, Yelp and Glassdoor. Kim believes that Yuk’s experience across consumer and enterprise will fit the unique needs of Blind’s business, which combines a consumer social network with B2B products.

For its own users though, the second area of attention is perhaps the most interesting: recruiting. Blind users are obsessed with career paths and compensation, and Kim said that “80% of our search keywords on Blind are company names or company names attached to levels, locations, or teams.” People want to know how to move their careers forward, an area companies are notoriously bad about explaining, and so “people come to Blind to find information from these verified employees.”

Blind is building what it calls “Talent by Blind,” a platform for capturing this hiring intentionality and selling it to recruiters. The goal is to transfer people whose intentions might be, say, L5 engineer at a big tech company in Seattle to a separate platform that can be used as a top-of-funnel for company recruitment efforts. Blind says a couple of companies are currently using this platform. 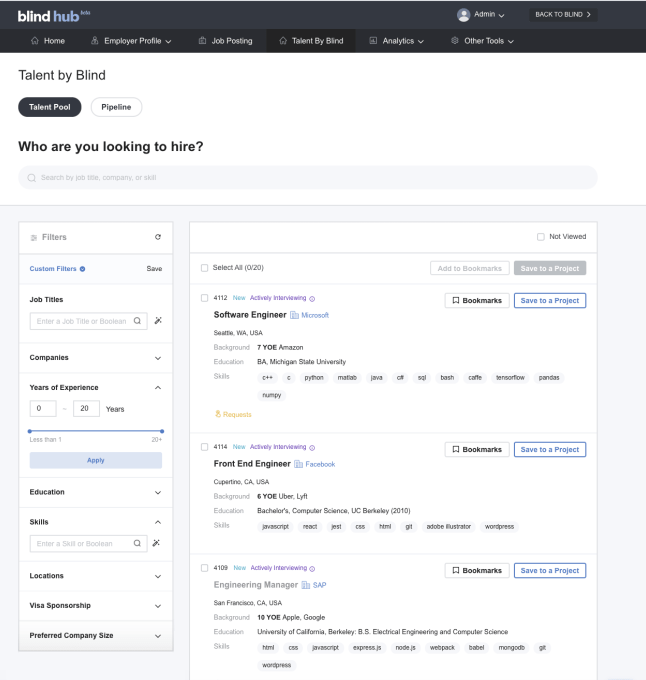 “Talent by Blind” is a platform to help transfer potential recruits into the top of the recruiting funnel at companies. Image Credits: Blind

Ultimately, Blind’s path has been one of slow and steady growth. The company claims to be deliberate in that approach, noting that pseudonymous communities often falter when they grow too fast and norms aren’t established early. Unlike more notorious anonymous communities from years past like Secret or YikYak, the company says that its network tends to be quite safe, since employees verify their identities and know that they are speaking directly to their colleagues.

Revenue approaches remain experimental, but ultimately, the key is that it has the users that companies want to hear from: their own employees and potential future employees. We want to “maintain that integrity with users,” Kim said. “ ‘Ally to employees and advisor to companies’ is the phrase we are trying to go for.”

“It’s been eight years we have been doing this business, [and] we have been focused on the longness,” he said. “There’s a lot of optimism in the company.” He would know — he probably checked Blind.

Under Fire From Small Traders Flipkart Turns To Social Commerce

What does the future look like for e-commerce aggregators? – TechCrunch