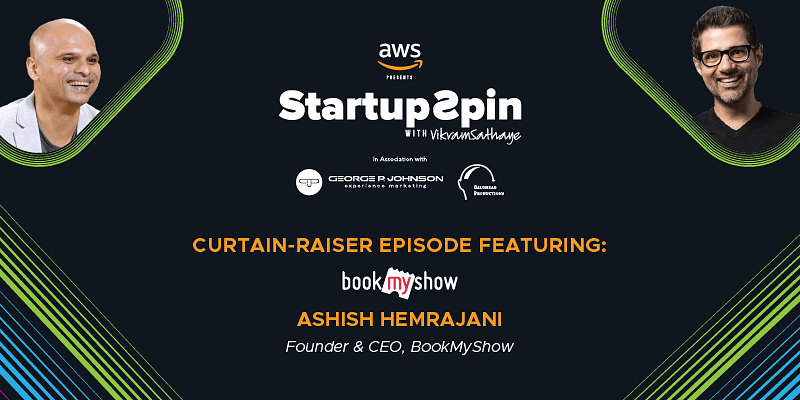 When it comes to building the next billion-dollar product or clinching the World Cup trophy, leading entrepreneurs and world-class cricketers have a lot in common. Exploring the similarities between sports and business is Startup Spin — a show that is hosted in association with AWS, George P Johnson Experience Marketing and Bald Head Productions — that unravels the personalities of the needle-movers of business in a never-before-seen format.

In the curtain raiser episode, Vikram gets up close and personal with Ashish Hemrajani, Founder and CEO, BookMyShow. The episode showcases his never-before-aired stories as he candidly talks about the lessons he picked up from sailing, the importance of value over valuations, attitude over skill sets, how to bring out the best out of your team, and other power-packed insights.

Here are some highlights from the conversation.

Value over valuations in business

Ashish set the ball rolling by acknowledging how 2021 was a great year for startups with many of them achieving the coveted Unicorn status, and attaining a valuation of $1 billion. However, he cautions about making it the sole focus of one’s business.

“I have nothing against Unicorns, it is a great validation to be valued at billion dollars plus. My only concern is that it should not be the only purpose. The purpose of business is to draw from society, create value and be valuable back to society,” he says.

Ashish also speaks about the importance of consistent, long-term efforts for success, and how to find the right routines to create such consistency. “(When it comes to routines), you are obsessed about some core things in life and there is no fatigue as the effort itself gives you joy, exhilaration and energy. If the effort becomes a chore, then you will never deliver results on anything,” he says.

A key reason for consistency in efforts, according to him, are the learnings and experiences that get picked up along the way. “Nobody sees the 20 years of effort and the struggles you have gone through to reach your success. You have to go through those experiences and failures, and if you can draw from those learnings over a period of time that you set out to achieve, there is nothing like it,” he says.

Ashish picked up his most important lessons from the sport. “In sailing, you use its rules to disadvantage your opponent, or use them to bend your strategy to win. The boat is also your island, so you cannot abandon ship. Nor can you abandon your teammates if a man is overboard. You have to go around to pick that person before reaching the finish line. When you are in the moment, you have to throw everything at it. It could be about winning and losing, or about capsizing, or life and death. It is a complete team effort,” he explains.

When it comes to hiring at BookMyShow, Ashish mentions that the right attitude holds much more importance than skills at the company. “Because skills keep morphing and they can be taught along the way. That X factor, or that edge where the person has something that you may not have, is what we look for,” he says.

He also shares his views on getting people to perform to the best of their abilities. “In a team, everyone is important. At any given point in time, how you plan and rotate your resources is crucial. As an entrepreneur, you must have a knack for rotating people and putting them in positions they are uncomfortable in, and I have seen that over a period of time, the delivery has been phenomenal,” he says.

On pivoting and persisting

Talking about how the ticketing platform pivoted during the pandemic to explore new growth opportunities, Ashish says, “We launched BookMyShow Stream (in February 2021). We as a company had to unlearn to learn again, because we had no idea how to ingest content, encrypt/decrypt, overlay captions, set up contracts. And now we do transactional video on demand (TVoD) where we provide you with recommendations from an AI overlay that is based on your viewing pattern.” he says. Off to a flying start, a popular title recently crossed 175,000 streams in less than 3 months, he adds.

Ashish is optimistic that the good times are right around the corner. “The roaring 20s will be back by 2022. A lot more spend and consumer demand are going to come up. There will be a lot more respect for family and true meaningful relationships,” he says, adding that there is going to be disruption in the way people consume content. “Cinemas are here to stay, and so are live events. Overall, I think things will get better,” he shares.

Why SaaS is bucking the venture slowdown – TechCrunch

Everything You Need To Know About R&D Tax Credits

Korea to become latest country to reach the moon, launch set for August 4