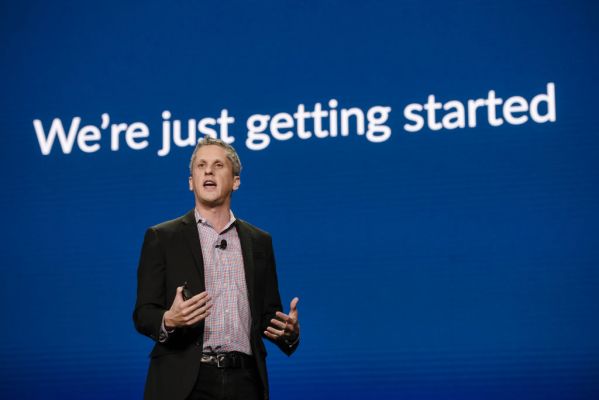 Shares of Box, a well-known content-and-collaboration company that went public in 2015, rose today after Reuters reported that the company is exploring a sale. TC previously discussed rising investor pressure for Box to ignite its share-price after years in the public-market wilderness.

At the close today Box’s equity was worth $23.65 per share, up around 5% from its opening value, but lower than its intraday peak of $26.47, reached after the news broke. The company went public a little over five years ago at $14 per share, only to see its share price rise to around the same level it returned today during its first day’s trading.

Box, famous during its startup phase thanks in part to its ubiquitous CEO and co-founder Aaron Levie, has continued to grow while public, albeit at a declining pace. Dropbox, a long-term rival, has also seen its growth rate decline since going public. Both have stressed rising profitability over revenue expansion in recent quarters.

But the problem that Box has encountered while public, namely hyper-scale platform companies with competing offerings, could also prove a lifeline; Google and Microsoft could be a future home for Levie’s company, after years of the duo challenging Box for deals.

As recently as last week, Box announced a deal for tighter integration with Microsoft Office 365. Given the timing of the release, it was easy to speculate the news could be landing ahead of a potential deal. The Reuters article adds fuel to the possibility.

While we can’t know for sure if the Reuters article is accurate, the possible sale of Box makes sense.

The article indicated that one of the possible acquisition options for Box could be taking it private again via private equity. Perhaps a firm like Vista or Thoma Bravo, two firms that tend to like mature SaaS companies with decent revenue and some issues, could swoop in to buy the struggling SaaS company. By taking companies off the market, reducing investor pressure and giving them room to maneuver, software companies can at times find new vigor.

Consider the case of Marketo, a company that Vista purchased in 2016 for $1.6 billion before turning it around and selling to Adobe in 2018 for $4.75 billion. The end result generated a strong profit for Vista, and a final landing for Marketo as part of a company with a broader platform of marketing tools.

If there are expenses at Box that could be trimmed, or a sales process that could be improved is not clear. But Box’s market value of $3.78 billion could put it within grasp of larger private-equity funds. Or well within the reaches of a host of larger enterprise software companies that might covet its list of business customers, technology, or both.

If the rumors are true, it could be a startling fall from grace for the company, moving from Silicon Valley startup-darling to IPO to sold entity in just six years. While it’s important to note these are just rumors, the writing could be on the wall for the company and it could just be a matter of when and not if.

A Guide to Launching a Niche Business

What are Featured Snippets? How to Get Them