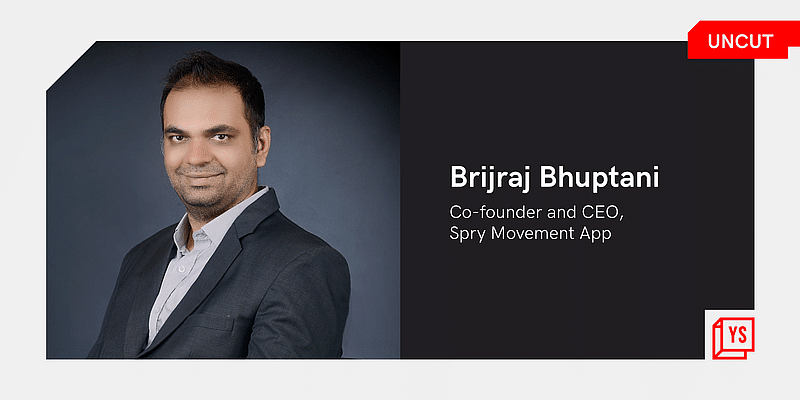 Being a startup founder is never a cakewalk. But does the road get a little smoother for a second-time entrepreneur? This week on YS UNCUT, seasoned entrepreneur Brijraj Bhuptani answers this question.

YS UNCUT is a series of interviews where entrepreneurs reveal the biggest challenges and failures they have faced in their journey so far. Former Chief Product and Technology Officer at Ola, Brijraj shares his entrepreneurial journey so far from founding Ridlr, to working at Ola, and then starting up Spry, which he runs currently.

Being a first-time entrepreneur

An electrical engineer from the University of Missouri, Brijraj worked with Qualcomm, Nextwave Wireless, and Sears India before he decided to take the entrepreneurial route. In April 2012, he co-founded Ridlr and Traffline, under parent company Birds Eye Systems, along with Ravi Khemani.

The Traffline app provided live traffic information for daily commuters. Ridlr, on the other hand, was an end-to-end ticketing and commuting app for public transportation. However, “Birds Eye Systems was initially running like a lab,” Brijraj tells YS.

While the team was focused on building “cool products”, they had no definitive plan or business and revenue models in place. As a result, they did not manage to get great user traction.

This, says the entrepreneur, was his biggest failure. In fact, the Traffline app had to be shut down. “I did not know how to scale the company, return to the investors or pay my employees. At one point, we were nine days from shutting down,” he adds, “We even had to turn off the air conditioner in the office,” recalls Brijraj.

The defining moment for Ridlr was raising the first round of funding towards the end of 2015. Brijraj turned around the business and decided that irrespective of how big or small his business becomes, Ridlr would “Never work in this manner ever again,” he adds. Post this, Birds Eye Systems changed 90 percent of the team to accommodate the new strategy.

A year and a half later, the startup got four term sheets from the likes of Amazon, Google, Ola, and Mobikwik. And in 2018, Ridlr was acquired by Ola Cabs, and Brijraj and his team of 64 people joined the ride-sharing unicorn.

But that was not the end of roadblocks for Brijraj and Ridlr.

The startup pivoted to a B2B model and partnered with government agencies, going against the wishes of many. Eight months later, Ridlr had no traction at all.

“For me to stand in front of investors and stakeholders and assure them to have patience, and holding the company together was very difficult…But eight months later, we changed the face of ticketing,” says Brijraj.

Bouncing back from zero

With the pandemic bringing mobility and transportation to a standstill, the growth graphs at both Ridlr and Ola took a detour and came soaring down.

“It was extremely depressing,” Brijraj recalls, “Mobility and helping people move was the only thing I knew and the world took that away from me.”

Soon, Ola cars were back in their garages, and driver executives were asked to not come to work. However, once things started looking better and Ola got its first 200 ride requests. “It felt like two million rides,” he exclaims.

On the flip side, these pandemic-led challenges resulted in the launch of Spry.

Mission: Mobility for all

After three years at Ola, in May last year, Brijraj joined hands with his former colleague Riyaz Rehman (former Chief Business Officer at Ridlr) to build Spry –  a startup aimed at democratising accessibility and affordability of movement health through its digital platform.

“As an entrepreneur, I strongly believe in mobility. Ridlr was also about helping people get from one point to another. Similarly, at Spry, I am empowering people to have the freedom to move…everyone is entitled to lead a pain-free life,” says Brijraj.

Delaware-based Spry works as a SaaS (Software-as-a-Service) platform, enabling physical rehabilitation practitioners and business owners to manage their administrative and clinical functions using just one tool. In less than a year, the startup has acquired over 100 clinics as clients in India, and another seven in the US.

This time, Brijraj says he has been mindful of having a concrete business and revenue model in place, which was missing in his previous venture.

The startup has both B2B and B2C revenue streams and earns on each transaction as well as in subscription form.

Looking back at the hurdles today, Brijraj believes that hard work is not always the way out of challenging times. “During childhood, we are taught that ‘mehnat karo, kuch na kuch ho jayega’ (work hard and you will figure something out), but that is not always the case,” he says, adding that there should be deep introspection about what one does, and how they do it.

Brijraj believes that there are multiple ways to do business and not every startup has to grow into a multi-million dollar business. “Understanding what and why you are doing something is crucial. If you are building a bootstrapped, sustainable business, be sure you are building it right. As an entrepreneur, I wanted to build a very good product…I did not think about monetisation, but wanted a lot of VC funding…Those things do not match together. There has to be a trajectory,” he says.

Then, there were other challenges — aligning the entrepreneurial journey with priorities.

Being raised by a single mother, family has always been very crucial for Brijraj. “Earlier I wanted to focus on my family and spend time with my children. Now that my children are grown up, I am back to focusing on the startup world,” he says.

He also emphasises that being young can no longer be an excuse for not knowing how things work. Considering the amount of information available today, one can easily research and gain insights to build a successful business.

Spry raised $3 million in its seed round from FJ Labs, Pareto, Knowledge Capital, AngelList, Whiteboard Capital, founders of Innovaccer, and from C-suite executives from SoftBank, Qualcomm, TPG, and Blackrock.

While raising capital is never an easy task, being a seasoned entrepreneur and formerly associated with Ola did make the job a little easier for Brijraj this time. “I have scaled a startup from zero, and I have also worked with an already scaled startup — these factors provide me certain advantages over first-time entrepreneurs,” he says.

From being a consumer-focused entrepreneur and dealing with the Indian market to pivoting into a B2B company and focusing on the US markets, the transition has been rocky for Brijraj.

“I did not start Spry to raise funds, I saw a bigger opportunity in the US and I wanted to leverage on that. After working in Ola and from learning the best, I have realised that thinking has to be backwards,” Brijraj signs off.

The workplace of the future: Hybrid, agile, flexible, mobile

Apply to pitch your startup at the TechCrunch Live Columbus event! – TechCrunch