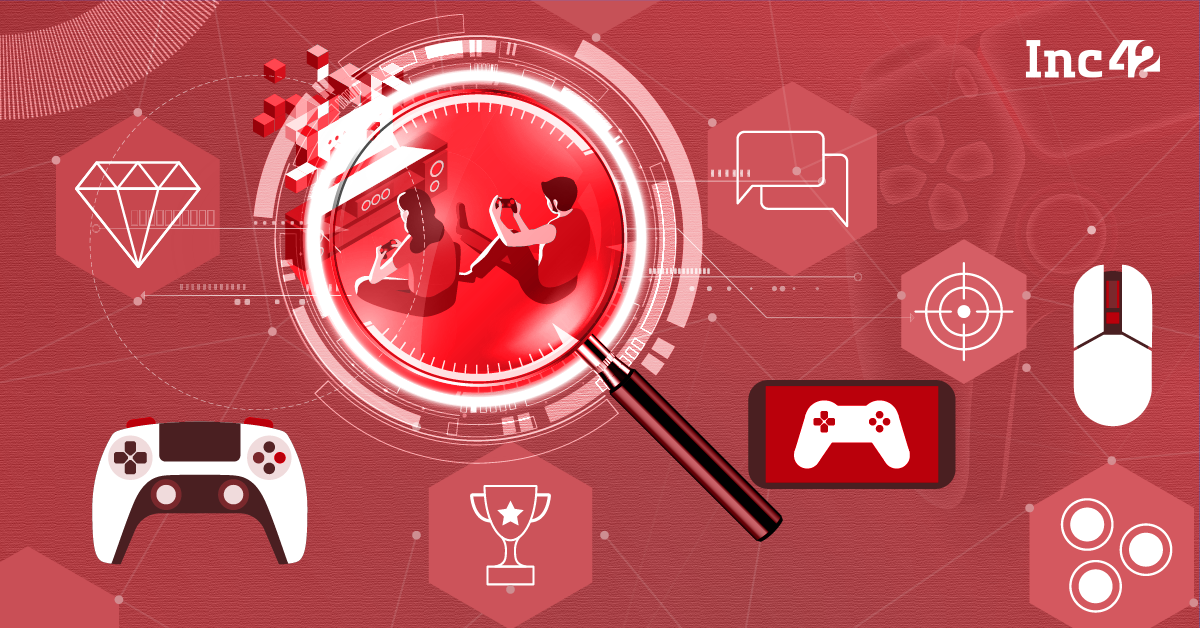 For a long time, the online gaming sector was seen as a miniscule segment of the media and entertainment industry in India. However, with the number of online gamers in the country reaching 390 Mn in 2021 and generating a revenue of nearly $1.3 Bn, the situation has changed now. Gaming is no more merely a kid’s play in India; rather it has emerged as one of the bright spots in the Indian entertainment industry.

While the gaming industry in the country has been on a growth trajectory for the last 5-6 years, the Covid-19 pandemic provided a major boost to the sector in the last couple of years. The sector minted its first unicorn Dream11 in 2019, with two more startups – MPL and Games 24×7 – joining the coveted club in 2021 and 2022, respectively. Meanwhile, gaming company Nazara Technologies made its debut on stock exchanges last year.

Touted as the sunrise sector in India, gaming has also been acknowledged by the government as one of the potential sectors for job creation. The Information and Broadcasting Ministry constituted an Animation, Visual Effects, Gaming and Comics (AVGC) promotion task force earlier this year to recommend ways to realise and build domestic capacity for serving Indian as well as global demand.

However, despite these positive developments, regulatory instability is one issue that has been plaguing the industry for the last two years. A number of states such as Telangana, Andhra Pradesh, Tamil Nadu, Karnataka, Kerala issued several notifications to ban online gaming over the last few years.

Although various high courts struck down these notifications when challenged legally, the proposals for ban have left the industry confused and also caused major setbacks initially. 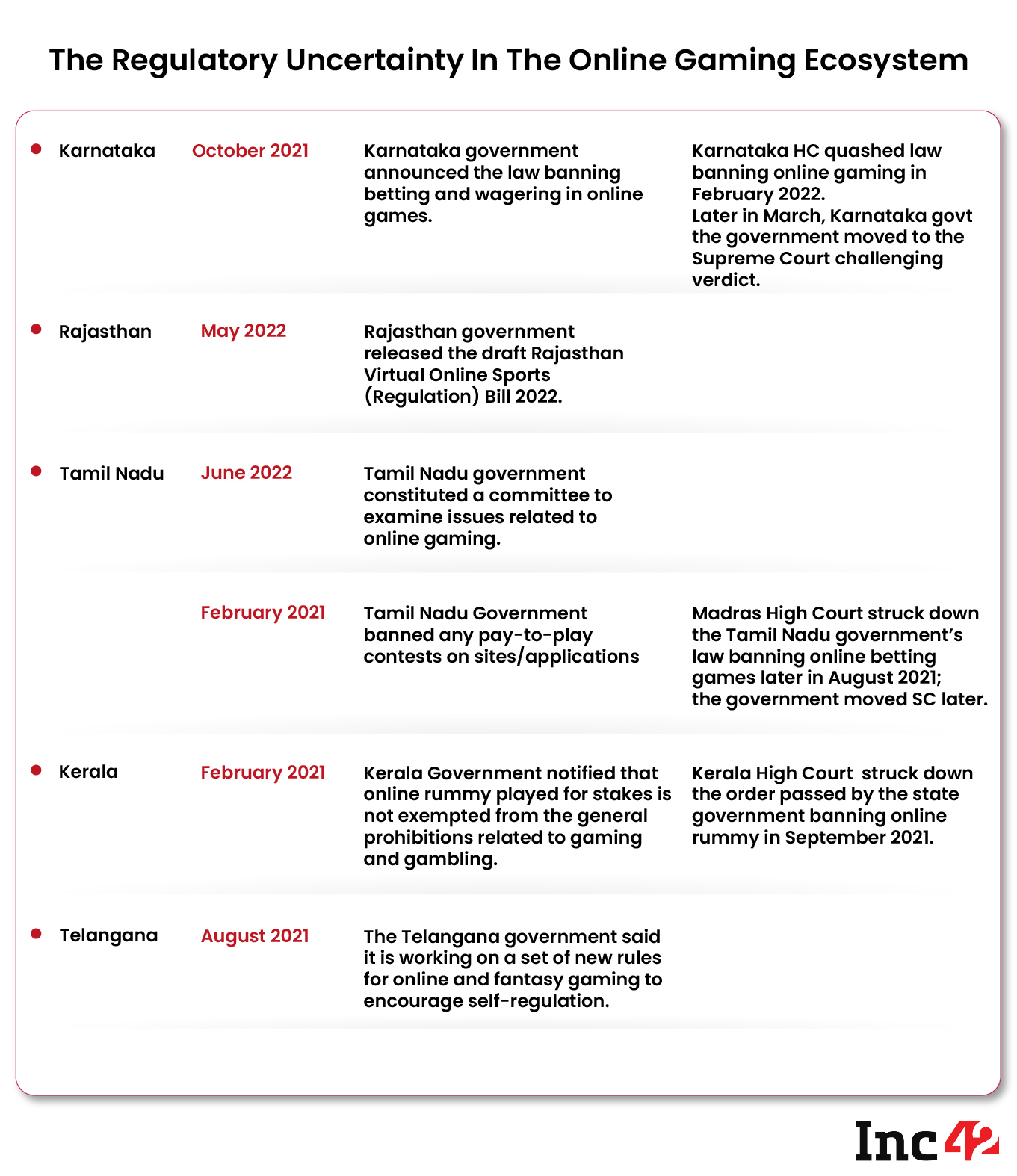 For the uninitiated, fantasy games are virtual games where players build make-believe teams of real players of a given sport, whereas real money gaming involves skill-based games such as Ludo, Poker that let users play for real money. 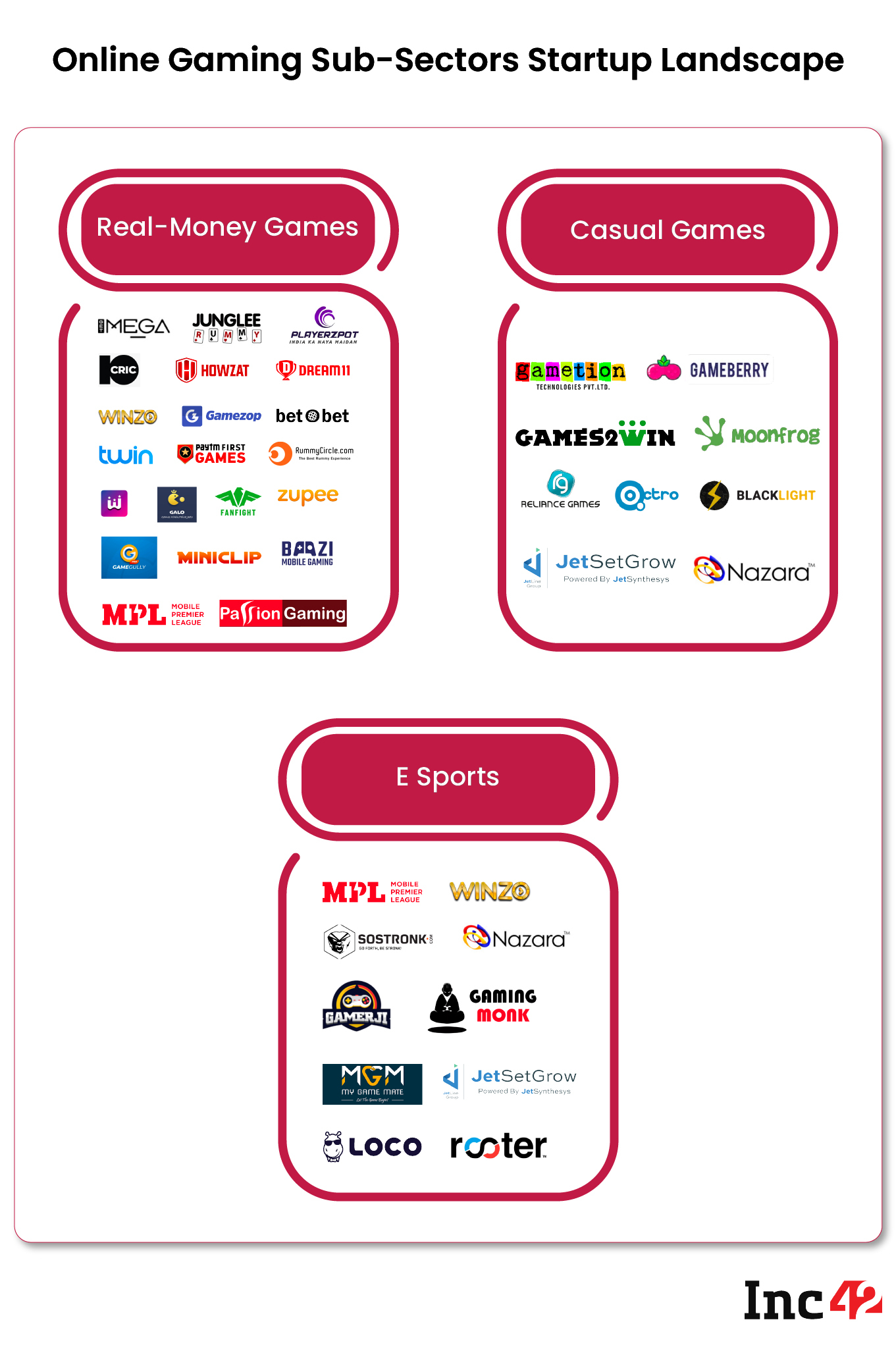 Due to the lack of resemblances among the nature of regulations brought by different states, the complexity in regulation has been burdening the overall gaming ecosystem. Hence, the industry is now calling for uniform guidelines by the central government.

Under the List-II of the Seventh Schedule of the Constitution of India, states have the power to legislate ‘sports’ and ‘betting and gambling’. While different states have taken different measures to regulate gambling and sports, the distinction between ‘games of skill’ vs ‘games of chance’ has not been made many times.

Despite recommendations and court observations to exempt skill-based games from the purview of gambling, the states have repeatedly amended existing laws or created new guidelines to ban any form of online gaming based on the logic that it could take the form of betting as well.

“The question that has always remained in the online gaming space is whether it’s a game of skill or a game of chance. The other issue is whether the game involves real money or does not involve real money. The third thing is whether the game is something like betting on an event which has not happened thus far or may happen in the future. These are the three main issues,” a legal expert, who didn’t want to be named, said.

As per the Gambling Act, its clauses are not applicable to ‘games of mere skill’. However, ‘mere skill’ has not been defined in the Act. This lack of definition of a game of skill is a major issue, Ketan Godkhindi, chief strategy officer at Witzeal Technologies, said.

Moreover, there is a common notion prevalent among the larger mass that anything which is online gaming is nothing more than betting or gambling, he added.

According to industry experts, the need of the hour is to have a clear definition for skill-based gaming, as well as standard parameters on how it can be distinguished from games of chance.

Conflict Within The Online Gaming Industry

Adding to the woes of the online gaming industry, the regulatory uncertainty has caused a rift within the industry as well. As per an industry source, there is no consensus among the gaming industry stakeholders on the legal challenges. In cases where online gaming does not contain any element of betting, many of the industry stakeholders are of the view that they are being involved in unnecessary controversy with real money gaming.

According to the founder of an esports startup, the different bodies, such as All India Gaming Federation (AIGF), Federation Of Fantasy Sports (FIFS), E-Gaming Federation (EGF), are working in different directions and some of these industry bodies only look out for a few big names. 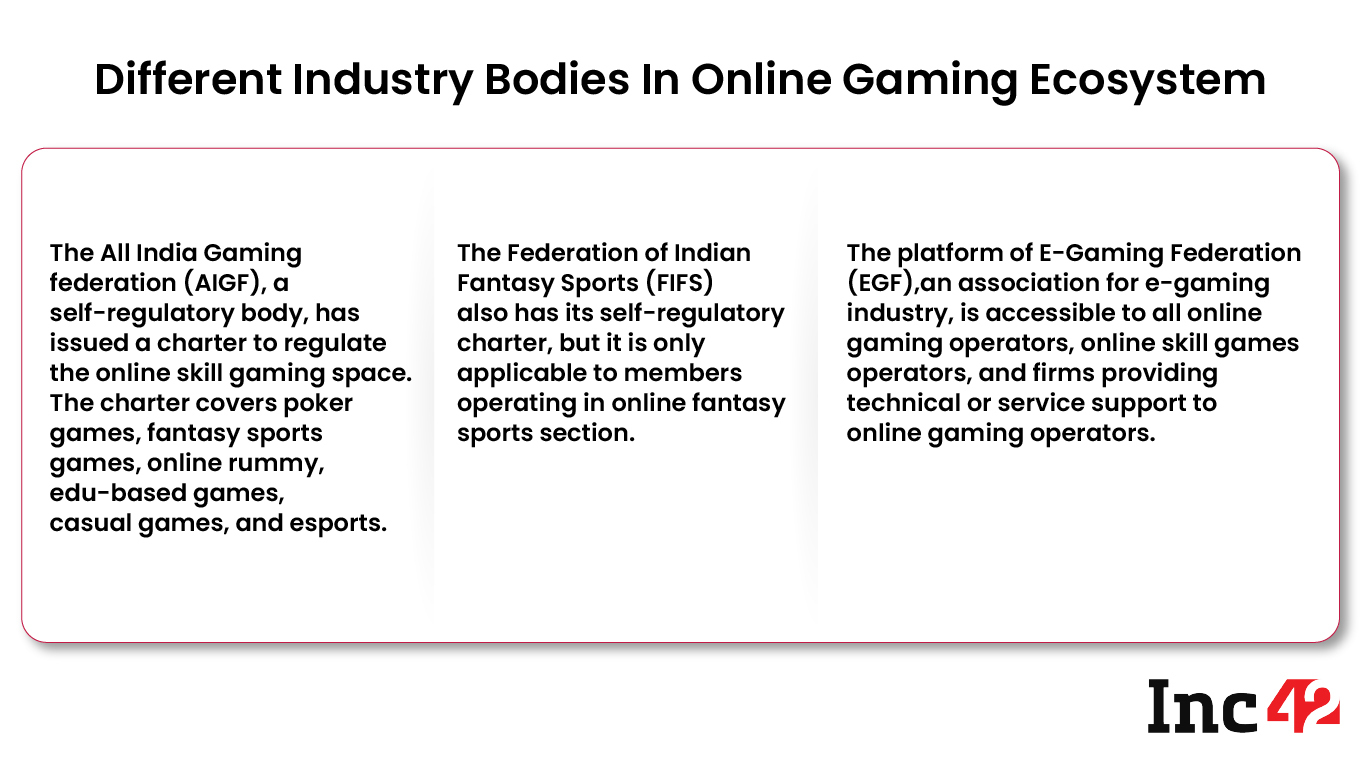 The unexpected bans enforced by different states have also impacted the business of gaming startups.

According to Mitesh Gangar, cofounder and director of PlayerzPot, whenever any state imposes a ban, the gaming operators lose the user base of that state, which directly or indirectly impacts the revenue. For instance, when the Tamil Nadu government banned online gaming with stakes last year, PlayerzPot immediately lost around 15% of its user base.

Moreover, these incidents also impact a company’s growth perspective as it has to rework long-term strategy and budget allocation, Gangar added.

Echoing similar sentiment, Yash Pariani, founder and CEO of House of Gaming, said, “Unexpected bans make it difficult for new businesses and startups to plan their entry into the industry. Initially, PubG was India’s most popular esport. Following its ban, Freefire’s popularity skyrocketed, and BGMI quickly followed suit. However, the numerous brands make it difficult for startups not only to devise an entry strategy, but also to strategise sustenance.”

According to Witzeal’s Godkhindi, the sudden bans also put pressure on the technology teams as the systems have to be reframed overnight. To take immediate action to comply with the orders, priorities change overnight which eventually causes disruption in the overall strategy. These incidents also impact the confidence of young entrepreneurs, partners, advisers, direct-indirect employees, he added.

More importantly, the regulatory instability makes it difficult for gaming startups to attract investors, a founder of a real money gaming startup said. Although the investors realise the potential of the gaming sector, they become cautious about making any investment decisions. 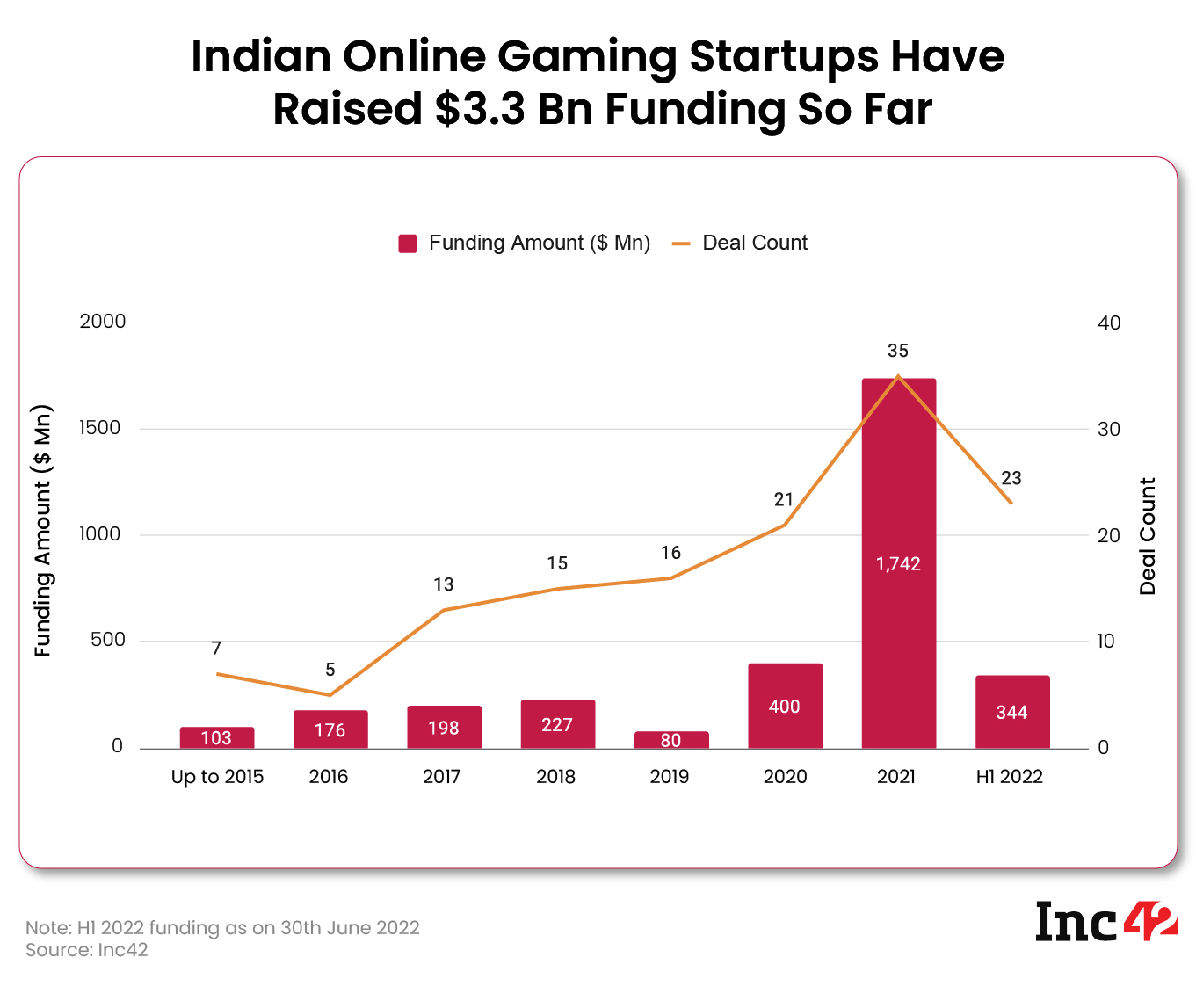 As per Richa Singh, cofounder of FanClash, the immediate need is to develop a gaming ecosystem with a unified national regulatory structure that can thrive under reasonable laws and oversight.

“The industry expects a clear definition of and distinction between skill vs chance-based online gaming and for the taxation to be levied on the platform fee rather than the entry fee. In the long run, self-regulation via esports industry players might help bring better clarity stemming from a deeper understanding of the nuances amongst different businesses in the sector,” Singh said.

Amid all the chaos, there have been some developments at the central government-level lately, giving a ray of hope to the troubled industry. In June, an inter-ministerial committee was set up to oversee the gaming industry in the country. The panel will work on regulations for the online gaming industry and identify a nodal ministry to look after the sector.

While the overall process may take a long time, the industry believes it can rely on self-regulation before any concrete guidelines from the government come into effect.

Uable makes a U-turn, focuses on teenagers with its content, commerce, community model

Pandemic To Help The Adoption Of Electric Vehicles in Delivery Sector

Looking to Start an Online Cake Shop: Here Are the Top 5 Things to Consider