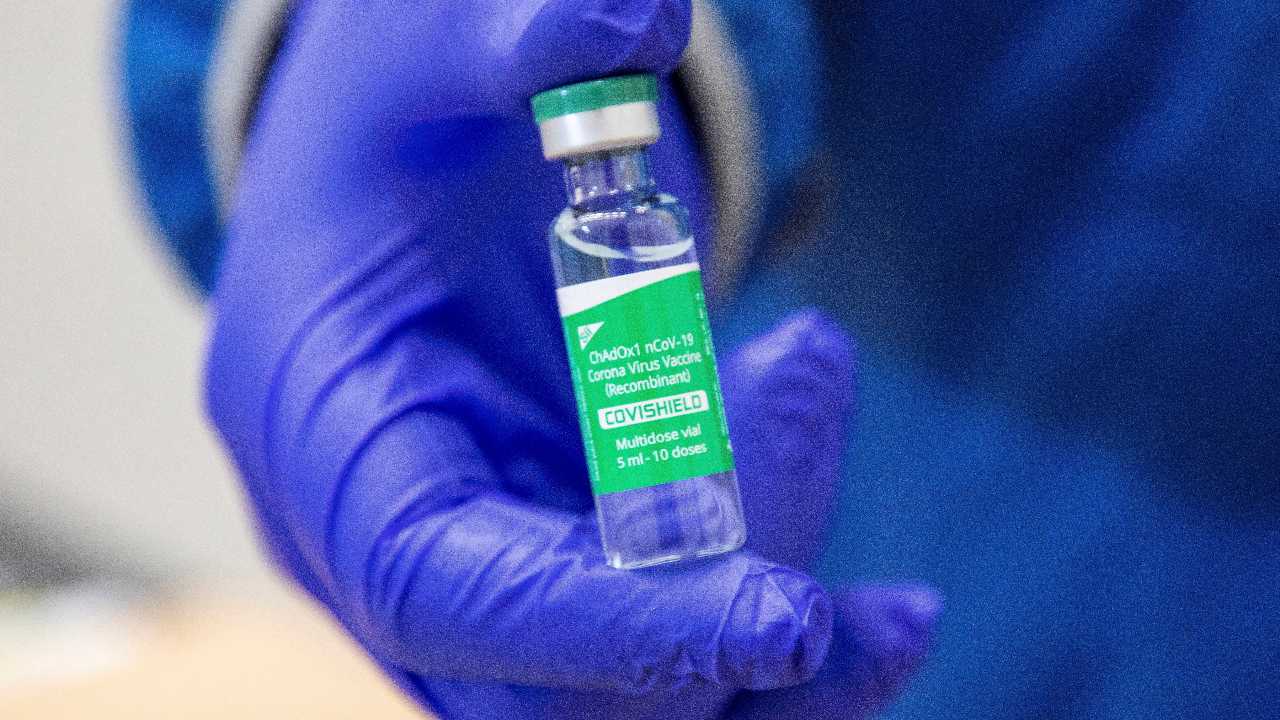 By doing so, around 80 percent of Canadians over the age of 16 will receive a single dose by the end of June with the expected supply of Pfizer-BioNTech and Moderna vaccines A vial of the AstraZeneca COVID-19 vaccine doses, one of the first 500,000 of the two million, is displayed that Canada has secured through a deal with the Serum Institute of India in partnership with Verity Pharma, Wednesday, March 3, 2021, at a facility in Milton, Ontario. Image credit: Carlos Osorio/Pool Photo via AP

shot to four months to quickly inoculate more people amid a shortage of doses in Canada. A number of provinces said they would do just that. Prime Minister Justin Trudeau also expressed optimism that vaccination timelines could be sped up. And Health Canada, the country’s regulator, said emerging evidence suggests high effectiveness for several weeks after the first dose and noted the panel’s recommendation in a tweet. But two top health officials called it an experiment.

The current protocol is an interval of three to four weeks between doses for the Pfizer, Moderna and AstraZeneca vaccines. Johnson & Johnson is a one-dose vaccine but has not been approved in Canada yet.

The National Advisory Committee on Immunization said extending the dose interval to four months would allow as many as 80 percent of Canadians over the age of 16 to receive a single dose by the end of June simply with the expected supply of Pfizer-BioNTech and Moderna vaccines.

Second doses would begin to be administered in July as more shipments arrive, the panel said, noting that 55 million doses are expected to be delivered in July, August and September.

In comparison, the federal government previously said 38 percent of people would receive two doses by the end of June.

“They are making, I think, a reasonable calculation in a time of drug shortage,” said Dr. Andrew Morris, a professor of infectious diseases at the University of Toronto and the medical director of the Antimicrobial Stewardship Program at Sinai-University Health Network. “It’s the right decision in my mind. Let me ask … A couple are given two vaccines. Do you give two to one, or give one each one dose? It’s a no brainer.”

The addition of the newly approved AstraZeneca vaccine to the country’s supply could mean almost all Canadians would get their first shot in that time frame.

“The vaccine effectiveness of the first dose will be monitored closely and the decision to delay the second dose will be continuously assessed based on surveillance and effectiveness data and post-implementation study designs,” the panel wrote.

“Effectiveness against variants of concern will also be monitored closely, and recommendations may need to be revised,” it said, adding there is currently no evidence that a longer interval will affect the emergence of the variants.

The updated guidance applies to all three of the vaccines currently approved for use in Canada.

The committee’s recommendation came hours after the Atlantic coast province of Newfoundland and Labrador said it will extend the interval between the first and second doses to four months, and days after health officials in the Pacific coast province of British Columbia announced they were doing so.

Manitoba and Quebec also said Wednesday they will delay second doses. And Ontario’s health minister said it would Ontario to rapidly accelerate its vaccine rollout.

Earlier Wednesday, Trudeau said any change in public health guidance regarding the timing of the two doses could affect the speed of Canada’s vaccine rollout, as could the approval of more vaccines like Johnson and Johnson.

Canada’s provinces administer health care in the country so it’s ultimately up to the provinces.

Dr Brad Wouters, executive vice-president of science and research at University Health Network, cast doubt on the recommendation. “Nobody in the world has been 4 months between doses. These are RNA vaccines never used before. We should use evidence to make decisions. Canada conducting a population experiment,” Wouters tweeted.

And Mona Nemer, the federal government’s Chief Science Advisor, also said this week that the plan amounts to a “population-level experiment” and that the data provided so far by Moderna and Pfizer-BioNTech is based on an interval of three to four weeks between doses.

But Dr Bonnie Henry, British Columbia’s provincial health officer, said the manufacturers structured their clinical trials that way to get the vaccines to market as quickly as possible, but said research in British Columbia, Quebec, Israel and the United Kingdom has shown that first doses are highly effective.

Dr Supriya Sharma, chief medical adviser for Health Canada, the country’s regulator, told the Canadian Broadcasting Corporation in a time of limited supply they are starting to have greater comfort with the idea of waiting for the second dose after seeing real-world data versus the strict interpretation of the clinical trials.

“In the real world we’re starting to see evidence from other countries that have delayed that second dose ‘Oh, it looks like they still have a really good effectiveness.’ We have lab studies that show it’s unlikely that immune response will drop off,” Sharma said.

Russia’s Baikal-GVD underwater telescope to look into the depths of the universe- Technology News, FP