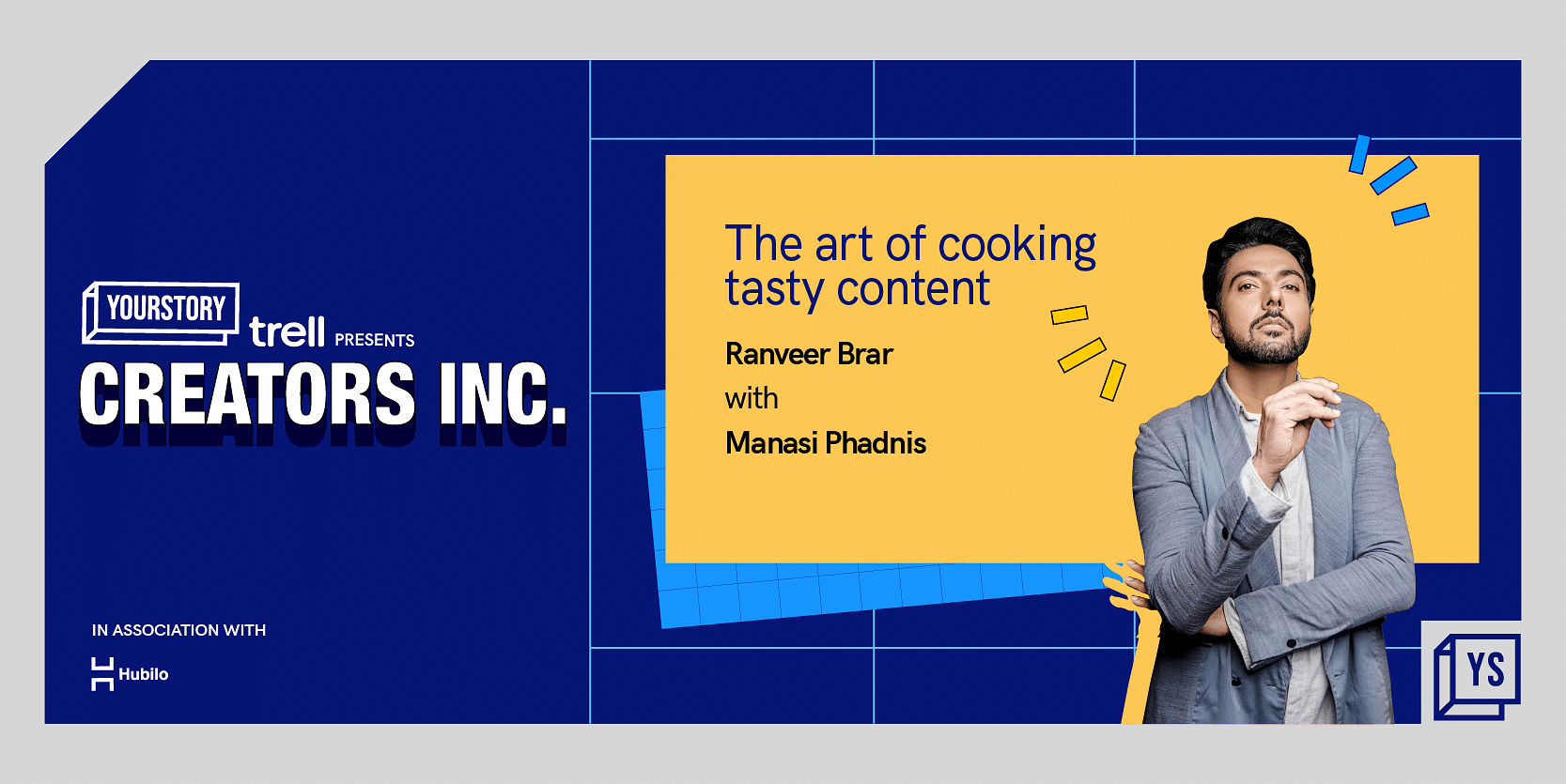 Authenticity is key to content creation. Speaking at YS’s Creators Inc. conference 2022,  Indian celebrity chef and digital food content creator Ranveer Brar says that every digital medium is about people wanting to see the ‘real’ you. It’s not about the ‘right’ or ‘wrong’ you’, there’s only the ‘real’ versus the ‘fake’ you.

When asked about ‘the secret recipe to building a successful career in food content creation’, here’s what the social-media savvy chef and a standout television personality, who has hosted various cookery shows, including Thank God It’s Fryday, Masterchef India, Sony BBC Earth, Raja Rasoi Aur Andaaz Anokha, had to say:

“The ability of digital to be real-time is beautiful. It is beautiful, because you’re more in tune with what people want. If you try something the result is right there in front of you whether it worked or it didn’t work. Television doesn’t do that,” opines Ranveer.

In terms of production, the culinary rockstar says that digital espouses the idea of ‘try small, fail small’. The low or zero entry-level barriers and minimal production values allow for more realism.

Mediocrity could be a problem with television because it is trying to make a lot of people happy. The digital medium, on the other hand, doesn’t need to work with the lowest common denominator in terms of the audience that it wants to appeal to.

“The startup mindset that digital has versus a big corporation mindset that television has will always have its advantages,” says Ranveer.

Television is more about set parameters wherein you create content for a certain set of people knowing very well that a certain set of people might not like it. Broadcasters/channels have their own parameters, they have their own idea of content. So, you always are boxed in this framework. Digital allows you to just be yourself unabashedly, he emphasises.

With 4.6 million subscribers on YouTube, the celebrity chef whose first successful restaurant venture “Banq”, in Boston, Massachusetts, was featured in the Wallpaper magazine as the “Best New Restaurant in the World”, stresses how it’s very important to understand analytics to be able to really benefit well from the medium that you’re working in. “Television doesn’t talk back, digital does. And if you don’t understand the language that it talks back to you in, and if you don’t do anything about it, then you’re sort of shooting in the dark,” says the digital culinary guru.

The digital takeoff and the breakthrough Nihari video

“When we came up with the idea of digital, I sat down with Pallavi (his wife who is in-charge of production) and the team, and wondered, ‘When you’re travelling, you’re free, but when you’re cooking in a kitchen, how can you be free then? How can you not be in a situation ki ep episode mein teen recipes karni hain, das minute mein ek recipe karni hain (that we have to pack in three recipes in one episode, or pull off a recipe in flat 10 minutes)? How to break free from that standard format?’,” shares Ranveer.

Talking about his breakthrough digital work, Ranveer says, “We have made videos for 16 minutes, and wondered who’s going to watch them in an ecosystem where three-to-five minute food videos are the norm. I remember the Nihari video was 16-minute long. And it just took off. Everybody was talking about the Nihari video. That’s when I realised that unlike on television where you have genuine constraints, most constraints in the digital space are created in your own head.”

In July 2016, Ranveer kickstarted his social media avatar through a mini-video series on Twitter titled Ranveer On The Road. The show covered his culinary sojourn through Australia, Seychelles, Turkey and Thailand.

“I always wondered why Twitter should be a character-driven place? Why can’t it be a content-driven place? We spoke to the Twitter team in India and they really liked the idea of a Twitter-exclusive travel series,” recalls the self-confessed movie buff and content junkie who enjoys reading as much as seeing and absorbing.

Monetisation – the rules to remember

“A lot of times, we see what’s working, and we try to replicate it, because it’s making money. But we forget that it’s taken a journey to get there. I have a lot of people who come and ask me questions, ‘my video went viral, why am I not making money?’,” shares Ranveer.

The key is to create a base of people who understand you, who get your expression over a period of time. You need to have a body of work to be able to do that. “Content virality and perenniality will always have to work together. Your content goes viral, people go to your page and then they see okay, everything else is not so great, it doesn’t work. Perenniality, consistency, keeping at it over a period of time, taking a journey and then just that one machis ki tilli will do,” says Ranveer about sustaining the virality quotient of digital content.

Earlier brands used to line up for Bollywood superstars to endorse their brands, but now they are vying for the attention of influencers. How does an influencer stay true to what they believe in and choose brand collaborations accordingly?

“I think brands also understand that the digital ecosystem is that ‘try small, fail small’ ecosystem, and they have to be okay with failing. They’re a lot more open to creators giving their inputs trying to do things their way, which is what makes the space more beautiful because we’re moving towards genuine collaborative ideas from just execution briefs,” opines Ranveer about the evolving dynamics.

Ranveer says it’s important to differentiate between the short-term and the long-term vision. “Believe that you’re a brand yourself. And if a brand is not willing to compromise when it is speaking to you, then you have all the right not to compromise, because until you start behaving like a brand, a brand will not take you seriously. Whether you’re a small influencer, or a big influencer, it doesn’t really matter. It’s very important to have a long-term vision for your brand,” comes some crucial advice from the chef.

Notes of nostalgia and warmth

Catering to the quintessential sentiment of mother’s food, we take him back to the digital series Maa ki Baat and he says that the core sentiment was “ma toh ma hain na” (there’s no one like mothers). “Initially, we wanted to invite the mothers of my celebrity friends and so on and so forth but we eventually called moms of team members, the dadis (grandmothers) of team members. It just seemed to work better because they had never faced the camera and after a point in time, they were just being themselves,” shares Ranveer.

Ranveer has often mentioned how ‘cooking is no rocket science’. “My content space is about teaching people a certain skill, it is not just about making them laugh or evoking an emotion. You have to tell people, it’s no big deal. I think that is what my approach has been, to use my 25-26 years of cooking experience to, to make things easy, approachable, to allow people to connect to food through my journey,” the chef leaves us with some parting wisdom.

Recognising the burgeoning creator ecosystem and the new wave of entrepreneurship that comes with it, YS is celebrating the works of both established and emerging influencers in an initiative aimed at identifying, celebrating and accelerating the journey of digital creators who make extraordinary, unique and engaging content. We’ve partnered with Trell to bring you the Top 100 Creators challenge, which you can apply for here.