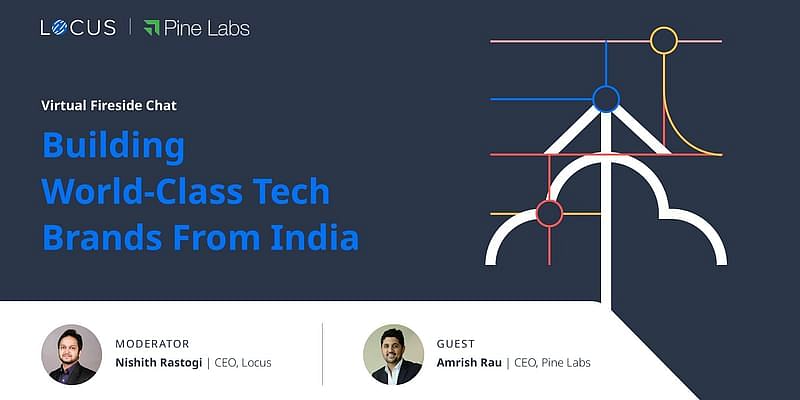 Although India observes National Technology Day on May 11 to mark the anniversary of the Pokhran nuclear tests of 1998, it goes without saying that this day is not just for scientists and engineers, but anyone who innovates to take the benefit to people at the grassroots level.

On account of the 30th National Technology Day, logistics and supply chain company, Locus hosted a fireside chat with Nishith Rastogi, CEO, Locus, and Amrish Rau, CEO, Pine Labs, on May 11, 2021. From key challenges when building a company, the foolproof product-market fit formula for growth, to the importance of company culture for its success, it was a candid conversation about everything related to building a world-class tech brand in India.

Amrish Rau has successfully built and led three billion-dollar companies – Pine Labs, Citrus & PayU, and First Data. With WFH being the norm, the number of meetings has tremendously increased, but one thing that hasn’t changed for Amrish is his habit of keeping a notebook and pen at hand. “I scribble everything interesting I hear in a business environment. I don’t necessarily go back and read it, but if I write it down, I remember better,” he said.

In March 2020, Amrish joined Pine Labs, Asia’s leading merchant commerce platform company, as CEO. In an uncertain macro environment as that, he still had great conviction in the organisation. “I realised 20 years ago that cash would go and digital payments would accelerate. Every day of my life, I have been fascinated by seeing money moving from paper to electrons moving in the air. Any business I have been involved in underlined the move away from paper cash to digital payments.”

In India, the online transaction rate is less than five percent, which is a big opportunity for the next 10 years to digitise small merchants and allow them to run their business differently. “Fifteen months back, I reiterated this to myself, and was convinced about joining Pine Labs,” he said.

That being said, Amrish confesses to having had seller’s remorse, having sold Citrus Pay after a great exit. “I felt I gave away a massive platform and I needed a platform, and Pine Labs was easy to build upon.”

According to him, there’s no such thing as a good time to exit. “It’s a special thing to have built a company, team and culture. Exits are not only about the money you make – it means you have to exit everything you built. The good thing now is there are amazing founders with massive dreams who are not ready to sell short, that’s good for the ecosystem.”

A beautiful product solves a business problem, where monetisation happens very easily and you have unparalleled distribution across the market. A company, on the other hand, consists of different stakeholders and what makes it special is empathy towards them.

“Make sure the people with you on the bus are going in the same direction. How you treat your team – employees, customers, investors, shareholders – and stand next to them in time of need is what makes the company beautiful,” said Amrish.

Nishith added that customers are automatically happy when teams are happy, saying that at Locus, the order of priority is—team, customers, investors and media.

A culture where you get to choose for yourself

Having built different companies, Amrish said that one thing he noticed was that no employee liked being constantly monitored.. “We live in a time where we get paid to think. You’re lucky if you’re in an environment where you can think, express and execute freely. If you want to do things differently from others, do what seems logical to you and don’t worry, because that tends to stick the most and get noticed.”

Delving on the topic of maternity leave, the speakers decided it is best to give a choice to the parents than giving them a policy we think is right. At Locus, they have a parenting policy as compared to maternity/paternity policy, so that no one parent should be burdened with childcare.

“They appreciate the flexible working hours. Let’s not choose for women by pushing six or 12 months on them. Parenting is an equal responsibility, so let them choose,” said Nishith.

Learning the common language to grow

Amrish also spoke about how founders and core members of the team need to have a certain culture and belief system and let that percolate to the rest of the organisation. “You should not be necessarily governed by what others have to say. If you believe that you have created a good culture, then what others say will be a way to improve your organisation rather than being harsh with what you do and how you think about it,” he said.

He also advised looking at a company’s consumer complaints if you wanted to know if they were going to make it big, adding that it should be specific complaints that add value.

“The minute the customer is unhappy, you find your product-market fit because there’s a pain they want you to solve. If no one is bothered, that’s the worst. The customers who have grown with us are the ones with the most complaints in the early days,” he said.

Amrish also spoke about how growth comes when founders and their teams are headed in the same direction and have a common language. “By common language, I mean companies should talk with honesty and empathy and in their own voice, it will be more impactful,” he said.

The value of degrees while recruiting

There’s often a lot of debate on whether a degree or educational qualification should be a criterion while recruiting someone. Amrish believes there’s both a yes and no to that question. “When it comes to the first few years, degrees are important because there’s really no benchmark on which you can understand someone’s perseverance, technical skills and ability to accept wins and losses. But after two or three years, it’s all about your experiences, what you’ve learnt and done,” he said.

Listen to the full conversation between Amrish and Nishith here.

How digital parking system in India can help Indian drivers

How to make the most of your design thinking efforts

How Eruditus built a global business around executive education — organically