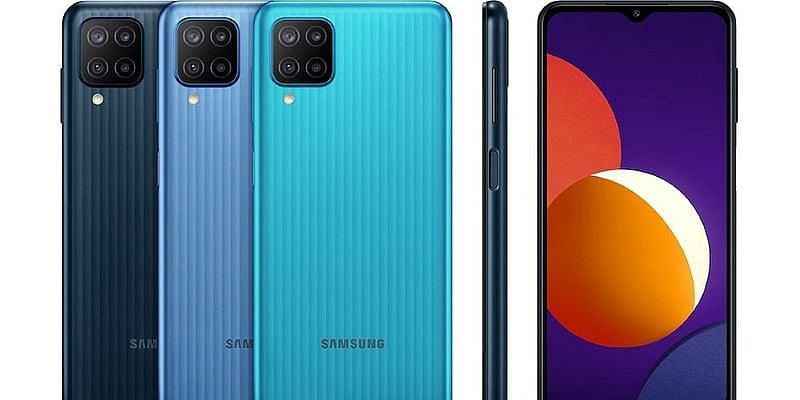 Samsung Galaxy M12 boasts of a quad-camera setup, an 8nm Exynos chipset, and a 90Hz display. The phone will be retailed in three colour options, which include Blue, Black, and White. It has a side-mounted fingerprint scanner, a 3.5mm headphone jack, and a USB Type-C port.

At the core of the phone is an Exynos 850 SoC, which is an octa-core processor clocked at 2.0GHz. The company claims that a power-efficient chipset will offer snappy performance, smooth multitasking, and reduced power consumption while browsing or using multiple apps.

Memory options include 4GB and 6GB of RAM and 64GB and 128GB of storage. The Samsung Galaxy M12 will also be offered with expandable storage options via a dedicated microSD card slot, supporting up to 1TB of storage expansion.

The display is a 6.5-inch HD+ TFT screen with a 20:9 aspect ratio. Samsung seems to have skipped on the use of AMOLED technology to keep costs under check. However, the presence of a 90Hz refresh rate should offer a fine balance.

Audiophiles will love the Dolby Atmos support on both wired and Bluetooth headsets. Sensors include just an accelerometer and a proximity sensor.

The new smartphone houses a massive 6,000 mAh battery with support for adaptive fast charging. However, the company provides only a 15-watt charger in-box. A full charge though is expected to last for more than a day for even the power users.

Optics is where smartphone makers are often seen making serious cuts. The Samsung Galaxy M12, too, is no different. Its primary shooter uses a 48MP ISOCELL GM2 with f/2.0 aperture.

Other lenses include a 5MP ultra-wide lens, a 2MP macro sensor, and a 2MP depth sensor. The latter two seem to have been added just to make the numbers.

The front camera is an 8MP shooter with an f/2.2 aperture housed in a waterdrop styled notch, which Samsung likes to call Infinity V.

What your browser knows about you?

Why more restaurants are preferring to go digital, and away from third-party aggregators

From making videos at home for LinkedIn to starting their own podcast series, 100X founders on their journey