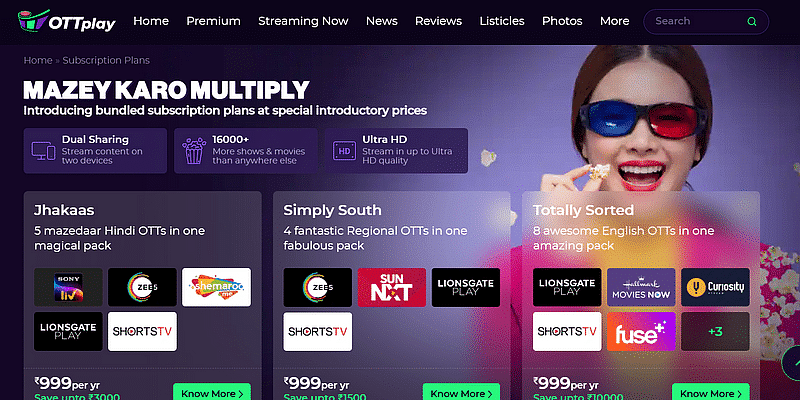 OTTPlay, a content aggregator platform backed by HT Media Ltd, is rolling out a subscription service. The platform provides curated movies and shows from Disney+Hotstar, Amazon Prime Video, and Lionsgate Play, among 12 other platform, amid entertainment platform clutter in India.

The Mumbai-based platform offers subscription plans starting at Rs 599 per year—which provides access to over-the-top (OTT) platforms—and at Rs 1,999, users get access to all 12 platforms.

“At the moment, there are so many content platforms producing movies and shows. We do not want to be in the production space. Instead, we are creating a solution where users do not have to surf through multiple platforms, remember multiple, passwords, and try to find that one piece of content they might want to watch,” Avinash Mudaliar, Co-founder, OTTPlay told YourStory at an event on Thursday.

“Instead, we have created a single platform where consumers can come and select whatever they want to watch,” he added.

The platform, which was started in 2021, aims to partner with a total of 25 platforms, including Namma Flix, a Kannada language OTT platform. OTTPlay has already introduced Hallmark Movies Now and Fuse+—both of which have not been launched separately in India.

The subscription plans for OTTPlay start at Rs 599

OTT aggregation comes at a time when viewers are bombarded with content from 30-40 platforms that either offer content for free or in exchange for a subscription fee. OTT platforms operating in India also have to be mindful of the country’s price-sensitive market. In April 2022, only 10 percent of people were paying to watch content out of 503 million users who have access to these platforms, according to a report by Ernst and Young (EY).

In the last few months, video streaming giants have also been losing steam, with Netflix losing subscribers for the first time in a decade. Its competitors including Amazon Prime Video and Disney+ Hotstar do not reveal user numbers.

Offering smaller subscription fees which give access to multiple platforms could work for a market like India. Recently, MX Player, which is owned by Times Internet, rolled out a watch-now-pay-later service, instead of a full-year subscription money upfront, in a bid to attract paid users.

OTTPlay currently claims to have five million users, with about 60 percent from metro cities and the remaining 40 percent from Tier-II cities. “Going forward we would be looking at partnering with more regional language players, such as Bhojpuri or Punjabi, to get more viewers from beyond metro cities,” says Avinash.

Velocity is addressing financing challenges with its revenue-based financing model

SoftBank signals tempering of investment sentiment for the year ahead

Here’s how Observe.ai is building an intelligent workforce platform with AWS