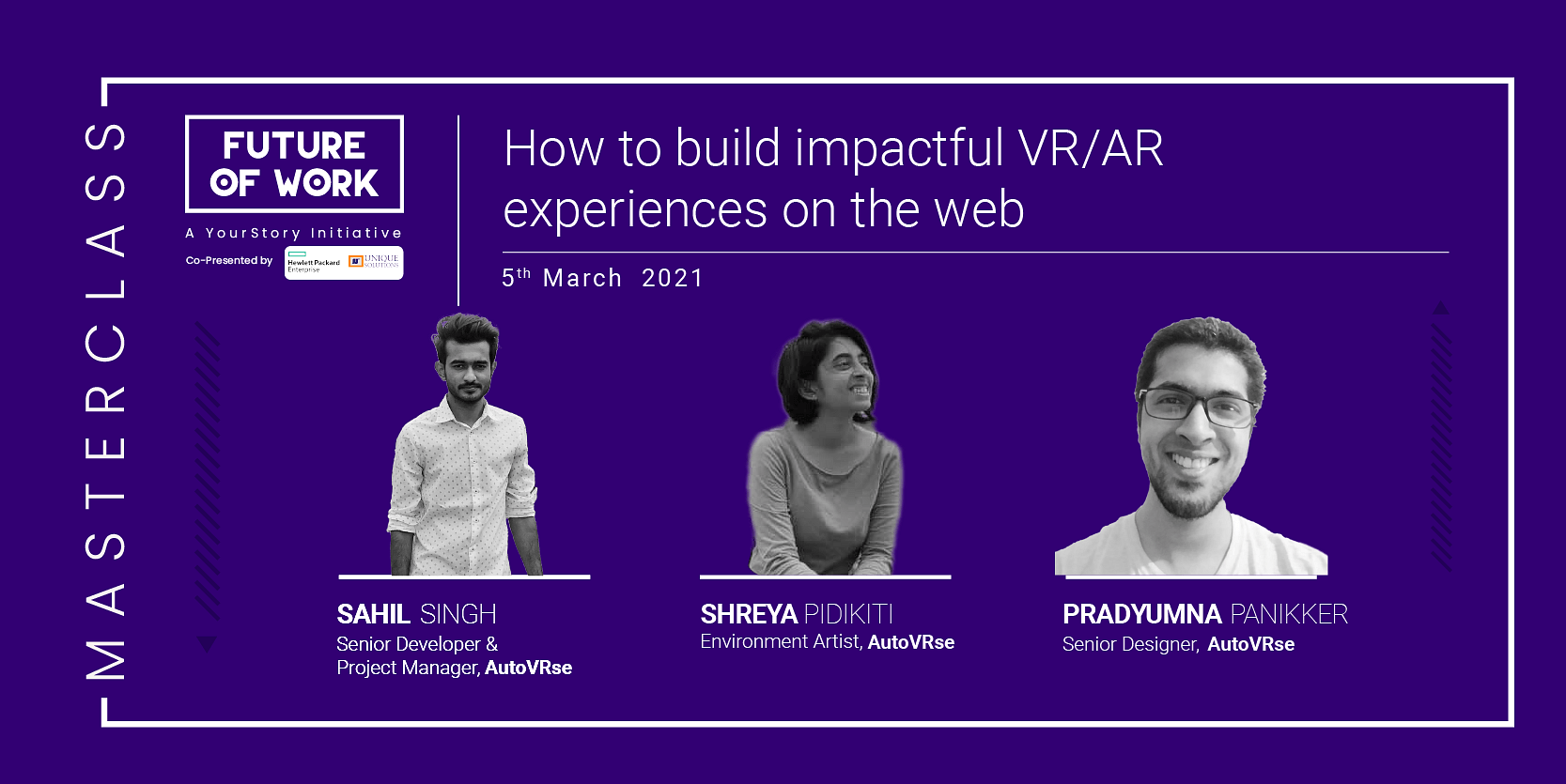 The key to creating impactful virtual reality (VR) and augmented reality (AR) experiences on the web lies in building a context, keeping it realistic, and focusing on the user experience, three experts from a Bengaluru-based AR and VR startup said at YourStory’s Future of Work Summit on Friday.

Sahil Singh, Shreya Pidikiti, and Pradyumna Panikker from AutoVRse explained how companies can leverage the two technologies, during their masterclass, “How to build impactful VR/AR experiences on the web” on Day 1 of the fourth edition of the two-day summit.

The startup has also aided automotive companies by building a VR software that can be deployed at the design stage, as well as at key customer touchpoints such as the showroom.

One of AutoVRse’s ambitious projects is a car configurator that helps customers personalise the vehicle using AR/VR.

AR and VR are much talked-about technologies, even as they await large-scale commercial use in India. The global AR, VR, and mixed reality market is forecast to reach $30.7 billion this year and rise close to $300 billion by 2024, says a March 1 report by Statista.

Singh, Senior Developer and Project Manager at AutoVRse, said that for any developer it is important to build a context and ask vital questions such as “for whom are we developing the prototype for?”.

He said the objectives should be clear while developing the product. Some key points developers need to keep in mind are ensuring the product works properly on mobiles, downloads quickly, contains stunning visuals, and runs at 30 frames per second at least.

AutoVRse, he said, uses open source 3D computer graphics software Blender to develop all models and prototypes; another tool called Substance Painter is used to polish the object and make it appear more authentic and realistic.

Senior Designer Panikker said that once the ideation stage is complete, the designer and his or her team must tap into the tools to create mock-ups, typically low-detail models of the environment where the prototype or object will be placed.

He said science fiction movies and cartoons that he had watched during his childhood helped him understand the concept and design better.

“When I was asked to create concepts for the environment, I got an opportunity to create something that was part of my childhood and put the science fiction genre to work while creating environments,” he said.

Like Singh, Panikker highlighted the importance of Blender, which, according to him, “transforms a basic prototype into something very cinematic with just a couple of tweaks”.

One of the tools Panikker said he relies on is Moodboard. A Moodboard is a digital collage of ideas used in graphic design and other fields of art and design.

“The Moodboard serves as a guide for the designer, as well as the rest of the team,” said Panikker. He talked about the effects of shadow and lighting effects, and other design elements.

Singh concluded the masterclass by talking about the recently introduced file extension, gITF. He said it was excellent for storing animation data, as its efficiency level is very high.

Instagram Shopping: How to Get More Exposure and Sales : Social Media Examiner