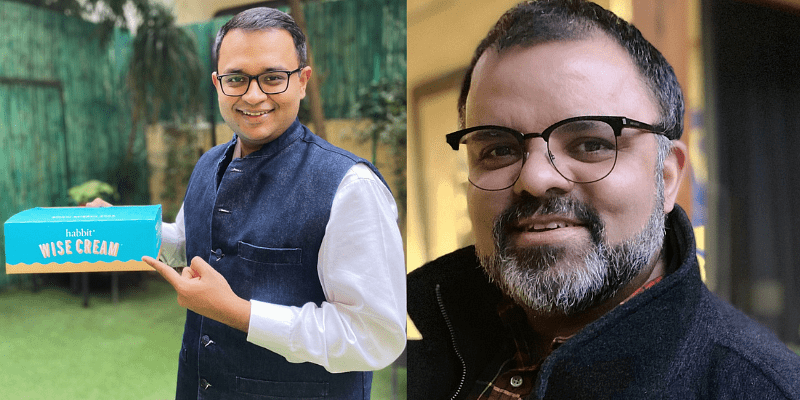 Dhruv Bhushan, co-founder and CEO of Habbit.Health, is a polymath. Aged 35, he has studied economics (with honours), law, and is an MBA from the Indian Institute of Management Indore.

Dhruv is fluent in six languages, plays poker, paints—and has started up before, building a collaborative writing platform in 2008, and running a skills training service between 2011 and 2013. He built and exited another startup, StudyBud, and has evolved into an angel investor in startups like BharatPe, Rupifi and Qbera.

But what Habbit.Health would need Dhruv to do was focus and channelise all his energies in one area for a long run.

It helped as he has a co-founder, who could narrow down a large market opportunity to a slice of consumers whose numbers would keep growing. Enter Dev Kabir Malik, co-founder and chief brand officer of Habbit.

Between 2015 and 2019, Malik served as creative director of B9 Beverages, renowned for craft beer Bira91. His brand design studio has created and reimagined several brands, including rebrands for Zilingo, Treebo Hotels, Sleepy Owl, and Bharat Pe.

Bira91 still stands out as a truly loved consumer brand with a large international footprint. With Habbit, Malik wanted to recreate that experience and consumer love in the nutritional food and beverages (F&B) ecosystem.

“Dhruv and I spent a long time discussing and imagining what Habbit was going to be,” Malik tells YourStory. “By the end of it, we aligned on vision and ambition. It was organic and logical to come together to build this out.”

So, what is Habbit.Health, apart from being a domain name they picked from GoDaddy?

It is an ecosystem of nutritional F&B products, from low calorie ice creams and Grade A protein super-shakes to a range of daily protein isolates. Habbit wants to be the world’s largest full-stack nutritional F&B ecosystem—not “just a product-centric brand with some flagship products,” in Dhruv’s words.

Habbit wants to be a way of life.

The origin of Habbit.Health is rooted in Dhruv’s personal transformation after he lost over 70 kg to realise the importance of nutrition for a healthy life.

During that arduous period, he learned that health and nutrition are made out to be too difficult, confusing and complicated. Instead of helping fix the root cause of poor dietary and lifestyle choices, large companies were busy pushing strange foods that didn’t taste good, or magic pills and powders that didn’t work.

But he needed to understand the target segment.

Habbit.Health began by narrowing the funnel of consumers it wants to go after from India’s $6 billion nutraceuticals market. A person currently spends $2 (Rs 145) on nutritional F&B, which is expected to rise to $18 (Rs 1,305) by the end of 2025. But the Delhi-headquartered startup is focussing on a certain type of household—not just a person craving healthy living.

Malik has trained Habbit’s focus on households earning less than Rs 20 lakh per year. He estimates India to have 10 million such households, which could grow to 23 million by 2030, which will then account for 22 percent of all nutritional F&B consumers. A conservative estimate pegs this as a $30 billion opportunity.

Habbit wants to have a one-to-one relationship with this consumer base. “This is only possible through digital channels,” says Dhruv. “We are building a direct-to-household pipeline for healthy consumption, thus owning the entire customer experience.”

In effect, Habbit’s products are available on its website. “Some SKUs (stock-keeping units) will also be available on third-party marketplaces,” Dhruv says.

But it is currently focussing on a community approach to growth and distribution. This entails creating a buzz using more than 300 key opinion leaders, 20 large community partners, and nearly 60 affiliate partners.

Once Habbit builds its playbook in Delhi across categories, it will start pushing for an omnichannel presence to scale up. For now, Habbit’s approach is D2C: Direct to Customer.

In the past three years, Habbit.Health has focussed on R&D. During its open beta and product development, more than 10,000 people were involved in sampling and trials, as early adopters. This included more than 300 key opinion leaders, and some of the top names in the health, fitness, nutrition and lifestyle industries in India.

Once the first phase of R&D was complete, Habbit Health was incorporated in November 2019.

More than 2,000 people purchased the first set of products on their beta website with AOV (average order value) crossing Rs 3,200. During that phase, over 60 percent were repeat customers, with no spend on promotions.

“It was purely organic referrals and word of mouth,” says Dhruv. In addition, products worth over Rs 15 lakh were sold offline per month through channels and partners.

In February 2021, Habbit debuted with a range of nutritional and tasty products that included proteins, ice creams and a super shake for the entire family.

“While we are investing in and developing global best-in-class products, our initial launch is focused on targeting urban consumers, primarily in Delhi-National Capital Region in the age group of 25-45 years,” Dhruv says.

Habbit’s analytics show that more than 70 percent of its buyer base comprises women aged between 25-35 years.

Its market slicing and product portfolio has evinced investor interest. In August 2020, Habbit Health and Nutrition raised an undisclosed amount as a pre-seed investment from investors led by VC fund 3one4 Capital, and Utsav Somani of AngelList India.

Habbit Health aspires to be a global FMCG company in a D2C world that leverages technology to deliver customer experience.

“Our aim is to also expand the brand in the international market,” Dhruv says, “To be a household and lifestyle brand that will keep introducing products for different occasions.”

9 Common Facebook Ad Mistakes and How to Fix Them