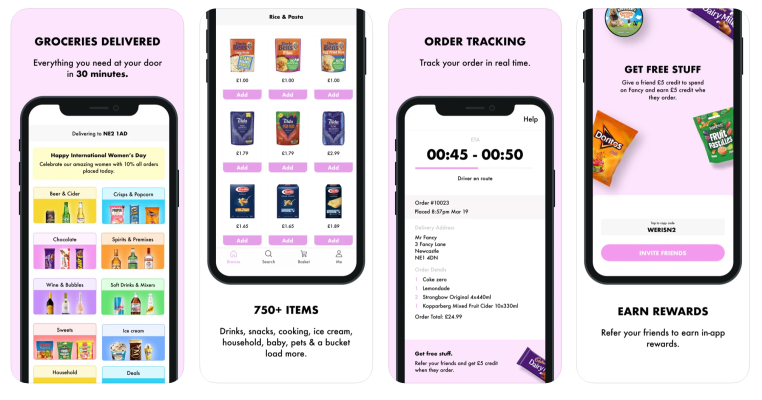 GoPuff, the U.S.-based startup that operates its own “microfulfillment” network and promises to deliver items such as over-the-counter medicine, baby food and alcohol in 30 minutes or less, is in talks to acquire the U.K.’s Fancy Delivery, TC has learned.

According to sources, terms of the acquisition are still being fleshed out, and the deal has yet to get over the line. However, an announcement could come in the next few weeks if not sooner. GoPuff declined to comment. Fancy’s founders couldn’t be reached before publication, either.

Launched late last year, Fancy currently operates in four cities in the U.K. and is a graduate of the Silicon Valley accelerator Y Combinator. It has a strikingly similar model to its potential buyer, leading some to describe it as a mini goPuff. The two companies are fully vertically integrated, meaning they each employ their own fleet of drivers and operate their own microfulfillment centres — sometimes dubbed “dark stores” — designed specifically for online ordering and hyper-local delivery.

Strategically, the potential acquisition of Fancy looks to be a good fit, and most notably would signal goPuff’s intent to expand to the U.K. via purchasing a nascent local player rather than starting entirely from scratch. Sources tell me Fancy will continue to operate under the Fancy brand and that goPuff intends to invest in its growth, including hiring and opening additional fulfillment centers. One source tells TC the acquisition will be an all-stock deal.

Meanwhile, Europe is seeing a slew of startups inspired by goPuff’s vertically integrated model sprouting up. They include Berlin’s much-hyped Gorillas and London’s Dija and Weezy, and France’s Cajoo, all of which claim to focus more on fresh food and groceries, where margins are arguably tighter. There’s also the likes of Zapp, which is still in stealth and more focused on a higher-margin convenience store offering.

Improve Warehouse Efficiency With These Tips!

How to Start Powder Coating as a Side Hustle