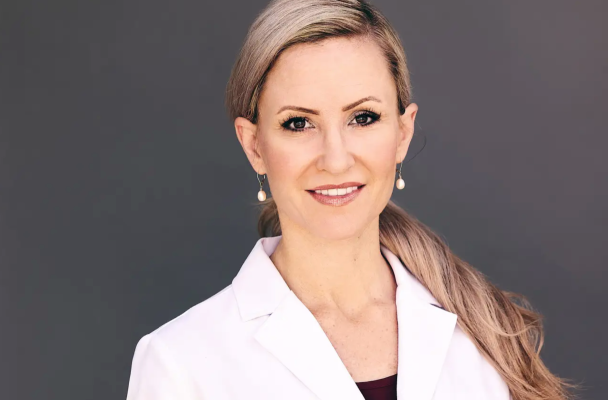 Charity Dean has been in the national spotlight lately because she was among a group of doctors, scientists and tech entrepreneurs who sounded the pandemic alarm early last year and who are featured in a new book by Michael Lewis about the U.S. response, called The Premonition.

It’s no wonder the press — and, seemingly moviemakers, too — are interested in Dean. Surgery is her first love, but she also studied tropical diseases and not only applied what she knows about outbreaks on the front lines last year, but also came to appreciate an opportunity that only someone in her position could see. Indeed, after the pandemic laid bare just how few tools were available to help the U.S. government to track how the virus was moving and mutating, she helped develop a model that has since been turned into subscription software to (hopefully) prevent, detect, and contain costly disease outbreaks in the future.

It’s tech that companies with global operations might want to understand better. It has also attracted $8 million in seed funding Venrock, Alphabet’s Verily unit, and Sweat Equity Ventures. We talked late last week with Dean about her now 20-person outfit, called The Public Health Company, and why she thinks disease-focused risk management will be as crucial for companies going forward as cybersecurity software. Our chat has been edited for length; you can also listen to it here.

TC: You went to medical school but you also have a master’s degree in public health and tropical medicine. Why was the latter an area of interest for you?

CD: Neither of my parents had college degrees. I grew up in very modest setting in rural Oregon. We were poor and by the grace of a full ride scholarship to college I got to be premed. When I was a little girl some missionaries came to our church and talked about disease outbreaks in Africa. I was seven years old, and driving home that evening with my parents, I said, ‘I’m going to be a doctor, and I’m going to study disease.’  It was outrageous because we were poor. My parents didn’t have college degrees. I didn’t know a single person with a college degree. But I was too young to know that there would be hurdles and blockers. My heart was set on that, and it never deviated from it.

TC: How do you wind up at the Santa Barbara County Public Health Department, instead of in private practice?

CD: It’s funny, when I was finishing up my residency — which I started doing general surgery, then I pivoted into internal medicine —  I had a number of different doctors’ private practices come to me and try to recruit me because of the shortage of women physicians.

[At the same time] the medical director from the county public health department came and found me and he said, ‘Hey, I hear you have a master’s in tropical medicine.’ And he said, ‘Would you consider coming to work as the deputy health officer, and communicable disease controller, and tuberculosis controller, and [oversee the] HIV clinic and homeless clinic?’ And . . . it was, for me, a fairly easy choice.

TC: Because there was so little attention being paid to all of these other issues?

CD: What caught my attention is when he said communicable disease controller, and tuberculosis controller. I had lived in Africa [for a time] and learned a lot about HIV, AIDS, tuberculosis, vaccine-preventable diseases, things you don’t see in the United States. [And the job] was so lockstep with who I was because it’s the safety net. [These afflicted individuals] don’t have health insurance. Many are undocumented. Many have nowhere else to go for health care, and the county clinic truly serves the communities that I cared about, and that’s where I wanted to be.

TC: Over the course of that job — and later at the California Department of Public Health — you developed a deep expertise in multi-drug-resistant tuberculosis. Was your understanding of how it is transmitted — and how the symptoms present differently — what made you so attuned to what was headed for the U.S. early last year?

CD: It was probably the single biggest contributor to my thinking. When we have a novel pathogen as a doctor, or as a communicable disease controller, you know, our mind thinks in terms of buckets of pathogen: some are airborne, some are spread on surfaces, some are spread through fecal material or through water. In January [of last year],  as I was watching the news reports emerge out of China, it became clear to me that this was potentially a perfect pathogen. What does that mean? It would mean it had some of the attributes of things like tuberculosis or measles or influenza — that it had the ability to spread from person to person, likely through the air, that it made people sick enough that China was standing up hospitals in two weeks, and that it moved fast enough through the population to grow exponentially.

TC: You are credited with helping to convince California Governor Gavin Newsom to issue lock-down orders when he did.

CD: Everything I’ve done is as part of a team. In March, some amazing heroes parachuted in from the private sector, including [former U.S Chief Technology Officer] Todd Park, [famed data scientist] DJ Patil, [and Venrock’s] Bob Kocher, to help the state of California develop a modeling effort that would actually show, through computer-generated models, in what direction the pandemic was headed.

TC: How did those efforts and thinking lead you to form The Public Health Company?

CD: What we are doing at The Public Health Company is incorporating the genomic variant analysis — or the fingerprint of the virus of COVID virus as it mutates and as it moves through a population —  with epidemiology investigations and [porting these with] the kind of traditional data you might have from a local public health officer into a platform to make those tools readily available and easy to use to inform decision makers. You don’t have to have a mathematician and a data scientist and an infectious disease doctor standing next to you to make a decision; we make those tools automated and readily available.

TC: Who are your customers? The U.S. government? Foreign governments?

CD: Are the tools that we’re developing useful for government? Absolutely. We’re engaged in a number of different partnerships where this is of incredible service to governments. But they’re as useful, if not even more useful, to the private sector because they haven’t had these tools. They don’t have a disease control capability at their fingertips and many of them have had to essentially stand up their own internal public health department, and figure it out on the fly, and the feedback that we’re seeing from private sector businesses has been incredible.

TC: I could see hedge funds and insurance companies gravitating quickly to this. What are some customers or types of customers that might surprise readers?

CD: One bucket that might not occur to people is in the risk management space of a large enterprise that has global operations like a warehouse or a factory in different places. The risk management of COVID-19 is going to look very different in each one of those locations based on: how the virus is mutating in that location, the demographics of their employees, the type of activities they’re doing, [and] the ventilation system in their facility. Trying to grapple with all of those different factors . . .is something that we can do for them through a combination of our tech-enabled service, the expertise we have, the modeling, and the genetic analysis.

I don’t know that risk management in terms of disease control has been a big part of private sector conversations, [but] we think of it similar to cyber security in that after a number of high-profile cyber security attacks, it became clear to every insurance agency or private sector business that risk management had to include cyber security they had to stand up. We very much believe that disease control in risk management for continuity of operations is going to be incredibly important moving forward in a way that I couldn’t have explained  before COVID. They see it now and they understand it’s an existential threat.