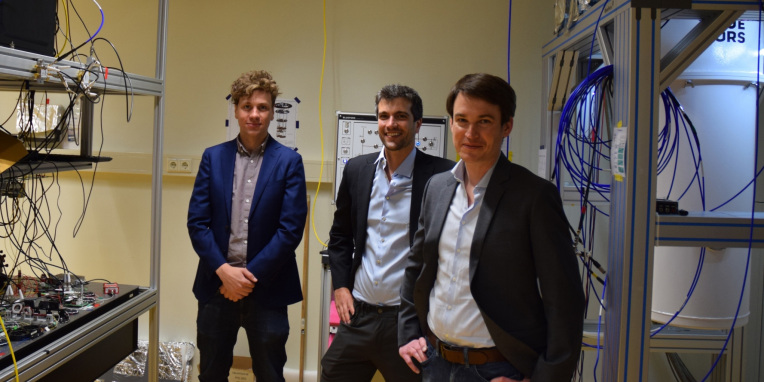 When eventually they become a working reality, quantum computers won’t be of much value if they simply sit there on their own. Just like the internet, the value is in the network. But right now there’s scant technology to link these powerful devices.

That’s where QphoX comes in. This Dutch startup has raised €2 million to connect quantum computers with a “quantum modem”.

The funding round was led by Quantonation, Speedinvest and High-Tech Gründerfonds, with participation from TU Delft.

QphoX aims to develop into a commercial product the quantum modem it created at Delft University of Technology (TU Delft). This networks separate processors together, allowing quantum computers to scale beyond tens or hundreds of qubits. Look out for the Singularity folks…

Simon Gröblacher, CEO and co-founder of QphoX, told me: “It is the exact same thing as a classical modem except for quantum computers, so it kind of converts electrical and microwave signals to optical signals coherently, so you don’t do any of the quantum information in the process. It then converts it back so you can really have two quantum computers talk to one another.

I noted that there’s more than one type of quantum computer. He countered, “We are in principle agnostic to what kind of quantum computer it is. All we do at the moment is we focus on the microwave part, so we can work with superconducting qubits, topological qubits etc. We can convert microwaves to optical signals and they can talk to each other. Currently, the only competitors I know are all the in the academic world. So this is we’re the first company to actually starts building a real product.”

Rick Hao, principal with Speedinvest’s Deep Tech team, added: “We want to invest in seed-stage deep technology startups that shape the future and QphoX is well-positioned to make a major impact. Over the next couple of years, there will be rapid progress in quantum computers. Quantum Modem, the product developed by QphoX, enables the development of quantum computers that demonstrate quantum advantage by combining separate quantum processors.”

3 Steps to Improve Your Online Security

From being an introvert to a champion for women in leadership, Infosys’ Nandini S finds opportunities in adversities