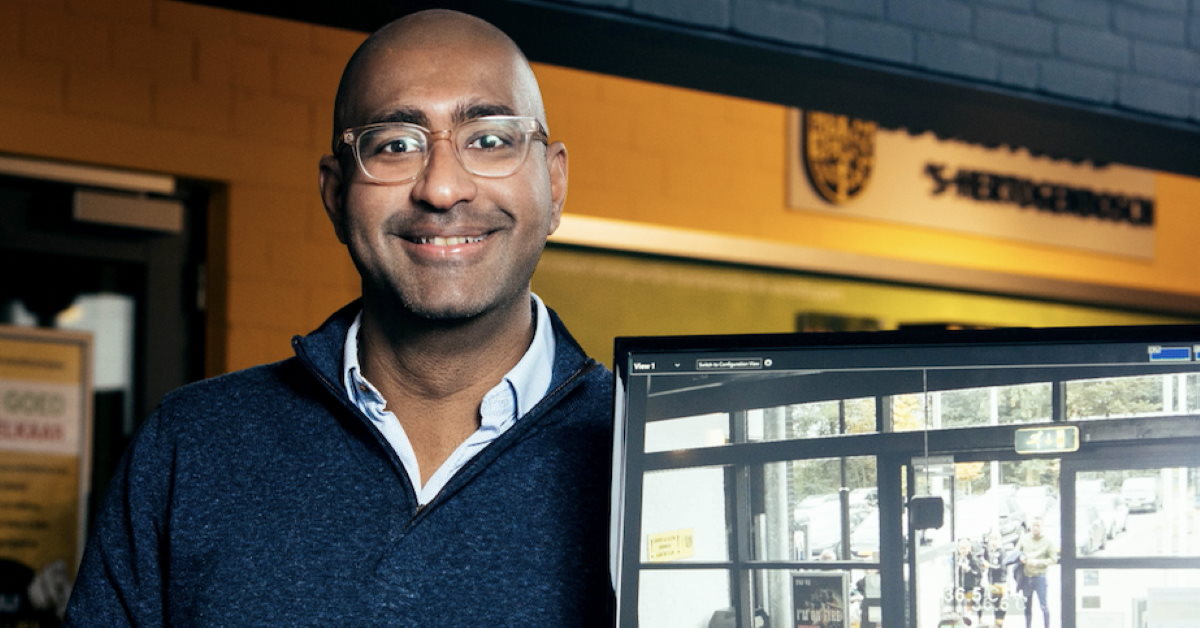 In the early 2000s, Rishi Lodhia shared a small room with his roommate Tijmen Vos. During the second year of their studies, they worked on web applications that were well ahead of their time. It’s 2021 now, and Lodhia still shares a small space with the same guy. Besides that, everything has changed. After selling and re-buying their own global video surveillance platform from Panasonic, they are now heading Eagle Eye Networks in EMEA and are part of the global leadership team. The company, with a solid base and EMEA headquarter in Amsterdam, is on its way to becoming a unicorn.

Cloud-based video surveillance for any situation

Eagle Eye Networks offers a smart, cloud-based video surveillance solution. Their software works with any connected camera, adding analytics to the recordings and an open API-platform for customised applications. Their use cases range from monitoring retail and hospitality to providing AI-enabled security in banks as well as entire cities. Last year, the scaleup installed more than 13.000 cloud-managed cameras all around Mexico City, to enhance the safety of its inhabitants.

Rishia Lodhia is Managing Director of Eagle Eye Networks in EMEA. His entrepreneurial adventure started long ago in Maastricht. Together with business partner and roommate Tijmen Vos he studied at the university. During his second year of International Business Science, Lodhia needed some cash but didn’t like the idea of getting a job. “We thought it was ridiculous to pour someone’s beer”, he recalls. So together with Vos, he started an internet business.

The aha-moment that led them to video

“We built web applications and custom made online business applications and we offered hosting. We were one of the first ones that built a good WYSIWIG-editor, an extremely intuitive Content Management System to maintain and edit your website. It was a web development company in an end-to-end way.” Lodhia and Vos built something like WordPress, WooCommerce or Joomla well before the world would even know these companies would ever exist. “It could’ve been one of the biggest digital companies in Europe, but we saw a market in video surveillance.”

That came after an ‘aha-moment’ Lodhia clearly remembers. One of his friends had a clothing store in Maastricht. He opened the second one in Groningen, on the other side of the country. That forced him to spend hours travelling back and forth. Lodhia: “We started thinking about what technology could do for him.”

Connected cameras before they were cool

Their solution: zero distance communication. “We installed a connected camera so my friend could see his store remotely. If a customer in Maastricht wanted a shirt in a different print, someone in Groningen could hold it up to the camera. And he could always see if the shelves were full and the store was set up neatly. It allowed him to run a better operation and he did not need to drive to Groningen every week.” A novelty in times before Zoom, Skype and FaceTime.

Lodhia noticed the surveillance industry slowly moving away from their analogue hardware. Their solution allowed cameras to be used not only for security but in many different ways. The knowledge he and Vos gained from their hosting business gave them an advantage when building their next company, CameraManager. By adding cloud-technology, before the cloud was invented, they were two product lifecycles ahead of the industry, says Lodhia: “It was like launching Spotify in the era where only cassettes existed.”

Building a fast-growing business meant for Lodhia they had to move to the ‘centre of the universe’. At that time, that was Amsterdam, where CameraManager moved in 2004. The company grew globally, although Lodhia remembers it wasn’t without its struggles. “Sometimes you want to stop, but you keep an eye on the prize. Our prize was disrupting the security camera industry.”

To speed up the company’s growth, Lodhia travelled to Silicon Valley in 2012, looking for capital and expanding to the US. “In the Netherlands, the whole idea of pouring a ton of money in your business and diluting your shares was not common. But we were open for it; we just wanted to achieve our goal.” In the end, it wasn’t a VC that took a seat at the board, it was Panasonic buying their entire company.

“Quite some camera manufacturers approached us”, says Lodhia. “One of them was the world leader, Panasonic. They saw the transition from just hardware to services. With that synergy, we’d directly have a global network.” In 2012 Panasonic acquired CameraManager. “For two flatscreens and a waffle iron,” is Lodhia’s way of saying he won’t divulge the purchase price. “It was a significant figure.”

For the first time in his life, Lodhia found himself working for a company. Despite Panasonic wanting them to ‘do their entrepreneurial thing’, even naming him CEO of Panasonic Cloud Management Services, the CameraManager team had to adapt. “The nature of a corporate is that there is a structure with a lot of rules and regulations. Otherwise, you can’t run an organisation of 400,000 people. But we came in and started to explain to this 100-year-old company our product and service.”

‘We kept the waffle iron’

There was a lot to learn for both, and at Panasonic, the team could work in the ‘Champions League of hardware development’. It did lead to the world’s first 4G enabled security camera, the Nubocam. Lodhia: “We were way too early again. Today companies like Nest and Ring and everybody else has it.” Lodhia found himself trying to convince massive company divisions in the US, India, Australia, Japan and Latin America of his vision. “Even though we had a couple of fantastic executives on board, the decision process was all complex and lengthy. We wanted to move faster. We saw opportunities that we were not able to grab.”

So they repurchased their company from the global corporation, to focus on their original goal. Again, acquisition numbers are not discussed but Lodhia says: “It cost us the two flatscreens, we kept the waffle iron.”

From Silicon Valley back to Amsterdam

Now they are faced with the task of scaling a company globally all by themselves. With a large, purpose-built cloud solution storing and processing terabytes of data from the footage, that is a costly business. Lodhia is back in Silicon Valley, looking for capital. But in 2017 he ends up partnering with one of his competitors to start Eagle Eye Networks. “Our companies were like twins separated at birth. So we said, ‘let’s do this’.”

It planted Lodhia back in Amsterdam, where Eagle Eye’s EMEA-headquarters is now located. There, he shares an office with his old student roommate Tijmen Vos, who is Global Product Director. “It’s as if it is our student room. Still scribbling ideas on the whiteboard, thinking where we’re going next.”

Growing the core team in Amsterdam

It makes sense for Eagle Eye Networks to stick to Amsterdam, says Lodhia: “It’s a fun city, very liberal, very international. With all the datacenters and one of the largest internet exchange points in the world nearby, it makes Amsterdam a super-fast hub. The government helps too; there’s minimal red tape.” Most importantly, it’s where their origin lies. “Our core team was already in Amsterdam.”

That team is rapidly expanding. Eagle Eye Networks is growing, so is the number of employees. Worldwide the scaleup employs around 280 people, but they are constantly adding new talent. “We are hiring significantly in Amsterdam. We added 30 people in the last three months, but it is not that easy to find real good talent. We’re looking for 30 more at the very least in the coming period.”

Eagle Eye Networks recently closed a massive funding round of 40 million dollars with Accel, the financier of companies like Facebook, Dropbox, Docusign, Slack and Spotify to facilitate that growth. The investment is no surprise for Lodhia, being the video surveillance leader in the cloud for the B2B-market.

“We will be the Microsoft or Coca-cola for video surveillance”, he says about the company’s future. A unicorn-status might be in the cards. “It’s a fast-growing, multibillion-dollar market. Us becoming the leader means there is a significant chance that will happen.”