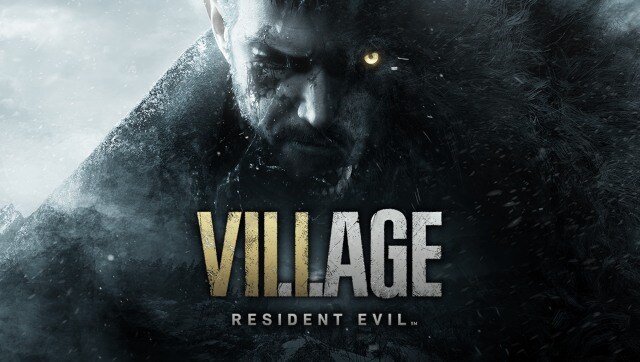 I despise horror as a genre.

Publicly, I maintain that the reason I don’t like it is that horror has a tendency to stick to tried and tested formulae, throwing in jump scares and creepy background scores with a boring predictability that sucks the fun out of the experience. But honestly, it’s mostly just because I’m a big ol’ wuss. However, as I peeked at the screen through my fingers during my first playthrough of Capcom’s Resident Evil: Village, I had to admit, I was having a really good time, because a) the game isn’t all that scary and b) even though it makes heavy use of basic horror elements, the entire package as a whole is quite entertaining.

The story begins with a couple of familiar faces, as we are quickly reunited with Ethan Winters, the protagonist of the previous title in this series, ie Resident Evil: Biohazard, and his wife Mia. After having gone through all manner of trouble to locate and then rescue Mia in the last game, Winters has now moved to an idyllic house in the country with her and their 6-month-old daughter, where they spend their nights telling each other spooky stories and drinking wine.

Of course, this is a horror game, and Winters’ domestic arrangement is a little too perfect to last, so soon enough, Chris Redfield shows up, murders Winters’ wife and kidnaps both him and his daughter. The vehicle in which they are being transported then crashes, leading a dazed Winters to wander through the woods for a while, before appearing to step through a Chronicles of Narnia-esque portal into an abandoned ghost town with a heavy Transylvanian influence.

As soon as you walk into the deserted Village, you are set upon by rabid mutated wolf-like creatures known as Lycans, and from then on, things only get worse as you bravely endure these hair-raising horrors in a bid to locate your daughter Rosemary.

The Village is ruled over by a motley crew of freakish whackjobs, comprising of Lady Dimitrescu, a statuesque vampire who has quickly become the obsession of weird perverts on the internet, Karl Heisenberg, who is the answer to the question ‘what if Nicolas Cage played Magneto in the X-Men movies,’ Donna Beneviento, a puppeteer who is a little too intimate with a creepy doll named Angie and Salvatore Moreau, a grotesque fish-man who can vomit acid. Lady Dimitrescu (yes, that Lady Dimitrescu) and Karl Heisenberg have a quarrel over who gets to eat me. Yay! Screen grab from Resident Evil: Village

This quartet of nutjobs is kept in check by a mysterious six-winged (two wings too many in my opinion, four is the reasonable limit) priestess named Mother Miranda. Miranda and her four henchmen are all really intriguing in their own unique ways, and most of them are quite fleshed-out as characters. Their introduction in the game instantly elevates the experience, and their interactions with the protagonist and each other do a great job of setting up the mythos of the game. I don’t think any of them are particularly frightening though, and honestly, they all feel a bit like leading characters from rejected Tim Burton film scripts in the early 2000s.

Each of Miranda’s underling is, in effect, a boss-level figure, with all four characters having their own separate areas in the game which you will be allowed to explore in due time. Lady Dimitrescu can be found in the opulent Dimitrescu castle, while Heisenberg resides in a grimy factory and Beneviento is located in an old rundown house in a misty valley. Moreau, being more fish than human, has perhaps the most interesting abode, a reservoir in which he can supersize himself into a salamander-fish hybrid.

Alright, before we go any further, let’s talk about the nine-foot tall elephant in the room. Yes, Lady Dimitrescu is a big girl. Yes, I’m aware of the fact that some people have fantasies of being picked up and thrown around by her, and honestly, who am I to judge? If that’s your thing, more power to you, but be forewarned, she is only a bit-part player in the story and her screen-time is quite brief, so maybe don’t buy it just for her.

Resident Evil: Village might not be a third-person shooter on paper, but it sure does give you a whole lot of stuff to shoot at. There are a whole lot of monstrous grunts that attack you in hordes, ranging from werewolves to zombies, and they’re all sufficiently different from each other to justify their existence. For example, the Lycans are a little faster and harder to hit, while the Moroaica are slow, but make up for their lack of pace with numbers. 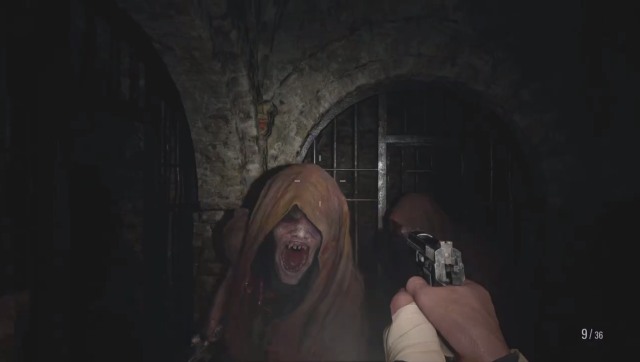 These charming ladies are called Moroaica, and they could just eat you up. Screen grab from Resident Evil: Village

There are also a number of mini-bosses that you can fight, with the most notable example being Lady Dimitrescu’s three daughters. All three of them have the same exact weakness, and can be beaten by the same strategy, but their entrances are quite memorable, and at least two of the three made me swear loudly when they suddenly appeared before me.

Now, overall, none of the creatures you face should pose any serious questions. Most of them can be taken down easily, and since I was playing the game at the standard levels of difficulty, I only died a handful of times. In fact, early on, enemies will largely approach you either alone or in pairs, but as the game progresses, they will start to attack in waves.

Are You Smarter Than A Fifth-Grader?

For a game that is rife with puzzles, Resident Evil: Village really doesn’t test your problem-solving abilities in any significant way. Most of the conundrums that the game puts in your path can be solved within minutes, and if you find yourself struggling to come up with an answer, there’s usually some manner of hint hidden in close proximity, in the shape of diary entries or engravings. I only ever found myself seriously stumped on one occasion, but that had more to do with my utter lack of situational awareness, which led to me missing a prompt for an item that anyone else would have spotted immediately.

Should you run out of supplies, the excessively rotund Duke will always be just a short distance away. The Duke owns the one-stop-shop for all your monster-hunting needs, and in it, you can find everything from ammunition and medicine to new firearms and briefcases that allow you to increase the space in your inventory. You can also trade in different treasures that you acquire during your travels for coins, so makes sure to pick up every little trinket that you come across. Luckily, monster sometimes turn into crystallised versions of themselves when you kill them, and these bedazzled busts can be sold for a pretty penny. A one-stop-shop for all your monster-hunting needs. Screen grab from Resident Evil: Village.

As much as I love the selection on offer, I have to inform you that the Duke’s Emporium, in all honesty, is a complete rip-off though. I relied solely on him for ammunition in the first couple of hours of my playthrough, and soon found myself carrying around an empty wallet. Akin to airports and movie theatres, there’s a high premium on every item, and you would be best served crafting a lot of the smaller stuff on your own. 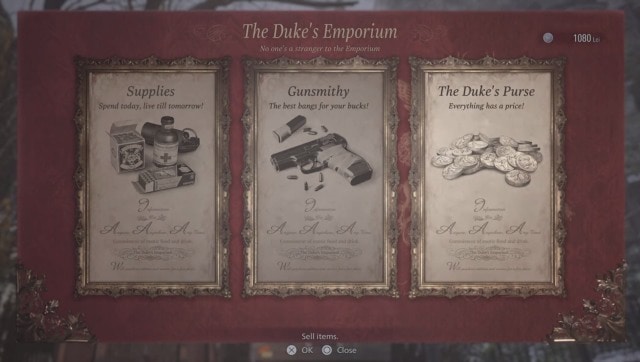 The Duke’s Emporium is an absolute rip-off. Screen grab from Resident Evil: Village

A little later in the game, you’ll also be granted access to The Duke’s kitchen, where he will cook up things for you if you hand in the right ingredients. The ingredients largely require you to indulge in a bit of hunting for animals, and when you gather up the right combinations, the dishes prepared by The Duke can give you serious stat boosts.

Move over Bear Grylls, Ethan Winters is the survival god now. With just some gunpowder and a bit of rusted scrap metal from under a staircase, Winters can craft all sorts of ammunition, ranging from simple shotgun shells to sniper rifle rounds that can take out gargoyles from a couple hundred metres away. Winters also has the ability to engineer land mines and pipe bombs and other explosives in a matter of seconds. He can also whip up medicine by combining chem fluid and ‘herb’, a vague plant that has miraculous healing properties, allowing him to even reattach a severed hand after it is chopped off by Lady Dimitrescu.

Resident Evil: Village is hardly the longest game I’ve ever played, and with an average play time of just over 10 hours, you can get through much of the story in no time. However, were you to take a completionist approach to the game, it will in all likelihood take you a lot longer to reach the end, seeing as there is a whole host of things that you can while away your time doing, including solving puzzles and acquiring treasures, some of which can be found and others which can be purchased.

Like other titles in the series, Resident Evil: Village also has Mercenaries mode, a post-game mode in which you can reattempt large portions of the game with newer, more efficient weapons that allow you to deal more damage and play at a higher difficulty level.

TL;DR: While Resident Evil: Village isn’t one of the most innovative titles of the genre, it manages to weave together well-worn horror tropes in a refreshing, fast-paced experienced.

Game reviewed on PlayStation 5 and PlayStation 4 Pro. The performance, apart from load times and graphical fidelity, did not vary all that much. Review codes provided by the publisher.