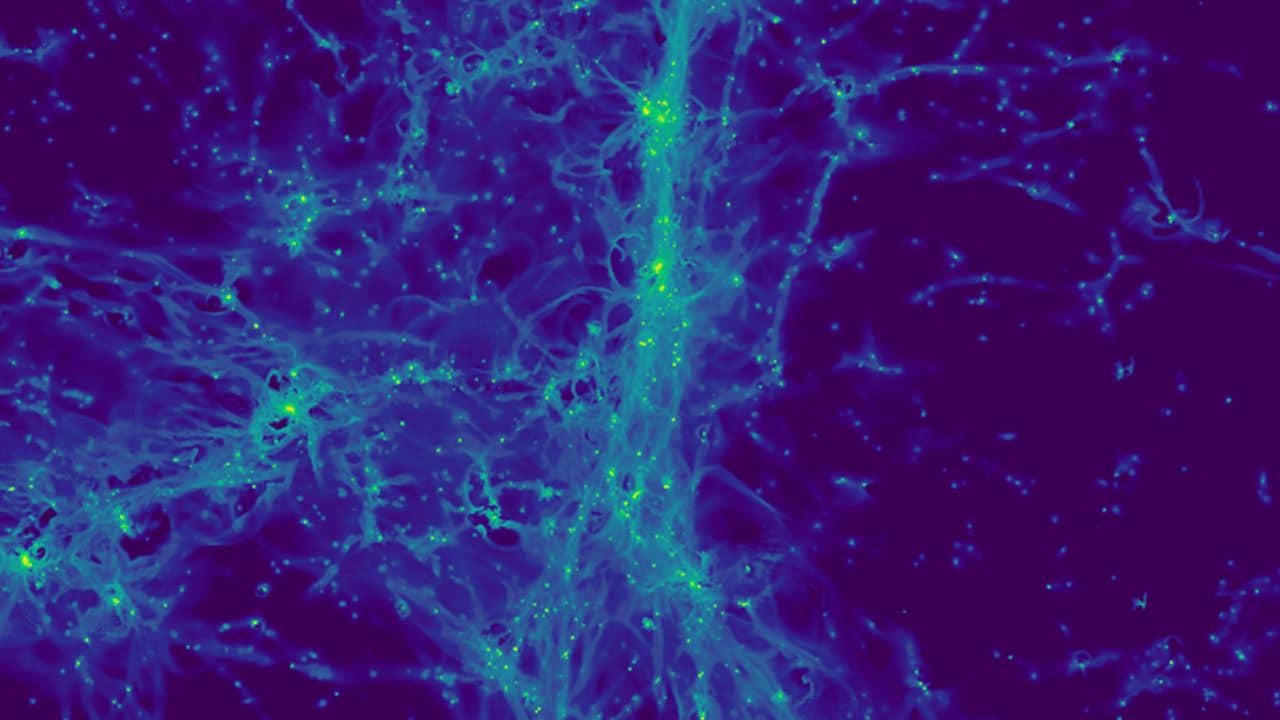 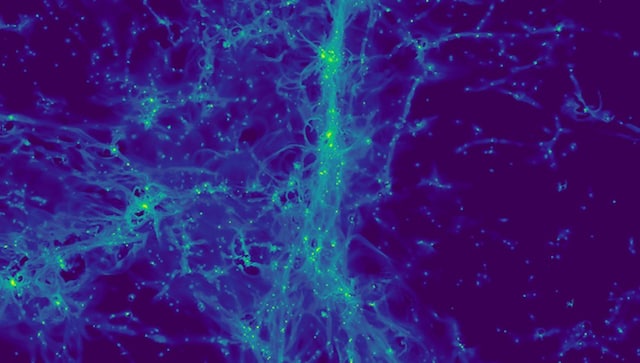 The image shows the light emitted by hydrogen atoms in the cosmic web in a region roughly 15 million light years across. In addition to the very weak emission from intergalactic gas, a number of point sources can be seen: these are galaxies in the process of forming their first stars. Image credit: CNRS/Jeremy Blaizot / projet SPHINX

Peering into the early Universe some 12 billion years ago, scientists in France have for the first time seen the incandescent filaments of hydrogen gas known as the “cosmic web,” they said Thursday. Cosmological models have long predicted their existence, but until now the cosmic web had never been directly observed and captured in images. Eight months of observation with the European Southern Observatory’s Very Large Telescope and a year of data crunching revealed the filaments as they existed only one to two billion years after the Big Bang. The image shows the light emitted by hydrogen atoms in the cosmic web in a region roughly 15 million light years across. In addition to the very weak emission from intergalactic gas, a number of point sources can be seen: these are galaxies in the process of forming their first stars. Image credit: CNRS/Jeremy Blaizot / projet SPHINX

But the biggest surprise, scientists said, was simulations showing that the light came from billions of previously invisible — and unsuspected — dwarf galaxies spawning trillions of stars.

The findings were reported in the journal Astronomy & Astrophysics.

“After an initial period of darkness, the Universe erupted with light and produced a huge number of stars,” senior author Roland Bacon, a scientist at the Centre for Astrophysics Research in Lyon, told AFP.

“One of the big questions is what ended that period of darkness,” leading to a phase in the early Universe known as re-ionisation, he said.

Until now, astronomers had only caught partial and indirect glimpses of the cosmic web via quasars, whose powerful radiation, like car headlights, reveals gas clouds along the line of sight.

But these regions do not represent the whole network of filaments where most galaxies — including our own — were born.

“These findings are fundamental,” commented Emanuele Daddi, a researcher at Atomic Energy Commission who did not take part in the study. “We have never seen a discharge of gases on this scale, which is essential for understanding how galaxies form.”

The team trained the ESO’s Very Large Telescope — equipped with a 3D spectrograph called MUSE — at a single region of the sky for over 140 hours. Together, the two instruments form one of the most powerful observation systems in the world.

The region selected forms part of the Hubble Ultra-Deep Field, which includes the deepest image of the cosmos ever obtained.

But the new images plumb new depths of the early Universe — 40 percent of the newly discovered galaxies were beyond Hubble’s reach.

Although these galaxies — 10 to 12 billion light years away — are too faint to be detected individually with current instruments, their existence will likely enhance and challenge existing models of galaxy formation.

Scientists are only now beginning to explore their implications, the researchers said.

Astronomers at the Lagrange Laboratory for the University Cote d’Azur has contributed to the research.