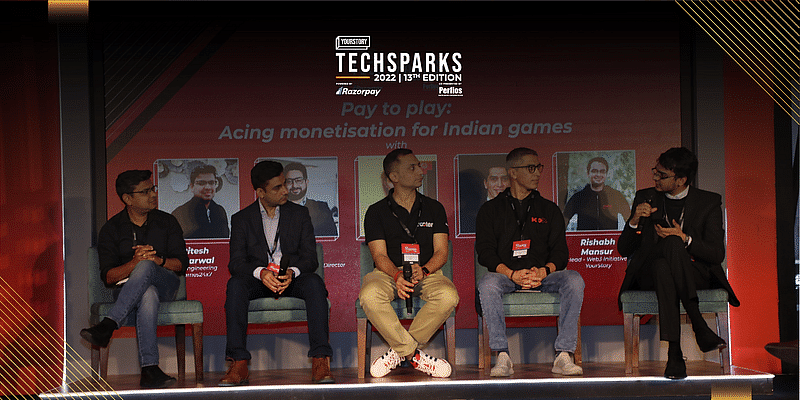 India’s online gaming sector scaled beyond belief in the pandemic months, becoming one of the fastest growing sectors. The industry, which was estimated to be at $2.2 billion in 2021 is now expected to hit $7 billion by 2026. This significant leap points towards a generation of new users – users who are quickly gravitating to various segments in the gaming industry. These include hyper-casual games, real money games, eSports and streaming, and they offer multiple channels of monetisation such as in-app purchases, play-to-earn, ad revenue, and subscription.

According to data.ai (formerly AppAnnie), Indian gamers spent $179.8 million on in-app purchases on gaming apps on the Google Play Store and Apple App Store between November 2021 and October 2022. The study further added that the total number of game downloads for paid games grew from 5.62 million to 5.83 million during the period.

Here are some of the key highlights from the discussion:

Evolution of the gaming sector

All speakers at the panel agreed that the gaming industry has evolved in the past decade, especially after the popularity of games like PUBG. “It opened a serious debate about the gaming industry, if it can be monetised in India. People who are playing mid-core, hard core games are very monetisable,” said Piyush, adding that the two monetisation channels at play are advertising and in-app purchases. While the former will take some time, games with the latter will grow faster.

Sudeep of Baazi Games noticed that people above 30 are ready to pay while gaming. “In the initial phases we saw the likes of Delhi, Maharashtra, Karnataka contributing heavily but we are seeing people from Bihar, Rajasthan, etc now as well,” he said, adding that it has become critical for brands to popularise the game among masses and increase awareness. Because that is when they will pick up the game and remain a user. Card gaming categories see the most retention and users play those games at least once a week.

Localisation and personalisation of games

Games24x7, India’s most valuable multi-game platform, joined the unicorn club earlier this year. The team credits its success to technology and data that helps them understand the needs of users and offer hyper-personalised solutions. Ritesh explained that the team has always believed in understanding the customer first because that leads to engagement. For that, they invest in AI/ML to predict user behaviour, understand the things the user values, their behaviour and playing patterns.

Another critical element is making their content more local. “We believe content matters, especially local. We try to build games with more Indian flavours so that people can resonate and engage,” Ritesh added.

Rooter, a game streaming and esports platform, monetises through multiple ways – brand monetisation and user monetisation. Both of which have been seeing great traction. Piyush believes that their biggest differentiating factor is personalisation. “We have been personalising the feed for each and every user and that has resulted in much better retention and engagement. And since we have access to data, we are able to serve them the right ads which are getting better response,” he said.

Shashank’s 100X.VC has 11 percent of gaming companies in their portfolio. But as an early-stage discovery fund, he claimed that he isn’t looking at their monetisation plans. Instead, his aim has been product market fit and stickiness. “Are customers using that platform? Are customers playing that game? These become critical for us when we invest,” he specified, adding that user retention and utility of the game are also important.

An eye on trends

It is no secret that the gaming industry stunned everyone with their growth trajectory. But Sudeep pointed out that from a real money gaming perspective, growth has slightly declined since the pandemic. “But the payments ecosystem has benefited. A lot of new users are ready to pay and take the plunge. The digital payment ecosystem definitely helped us,” he added.

Echoing similar sentiments, Ritesh added that they saw tremendous growth during the pandemic, especially with respect to users who were on the fence, and users who never tried real money gaming before. But the journey wasn’t without challenges. “We had to think of innovative ways to tackle that and keep existing users engaged. Rummy especially saw massive growth and it’s still witnessing a rapid YoY growth,” he said.

Rooter’s typical audience is 10 to 25 years old, which is 80 percent of their audience. The team hasn’t experienced any decline in their users and their engagement is only getting better. “Many large games are coming with their mobile versions and more and more content will get generated,” Piyush said.

Shashank noted that only one vertical has gone off the roof, which is media and entertainment, including gaming. “The sector is definitely here to stay,” he signed off.

Koo to raise headcount to 500 in one year; to hire for engineering, product, community management

[Funding alert] Zomentum raises $13M in Series A round