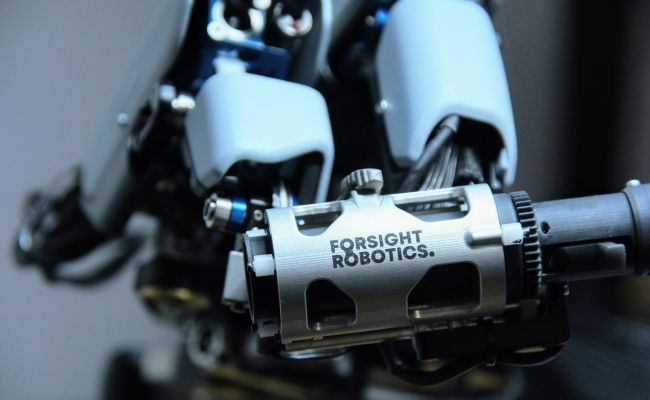 Israel-based ForSight Robotics announced today that it has raised $10 million for what it has deemed a “mega-seed round.” Led by Eclipse Ventures and Mithril Capital, the round will go toward expanding the company’s headcount and global reach, as it looks to bring its offerings to international markets, pending the sorts of regulatory approvals that go into launching a robotic surgery platform.

The company’s surgical platform is designed specifically for ophthalmological (eye) surgeries — a category requiring a great deal of precision. It’s also one in great demand. The company cites a recent study from the British Journal of Ophthalmology, putting the number of qualified eye surgeons at around 72 per million people in developed nations and a mere 3.7 surgeons per million in developed countries.

“It’s a proprietary technology that we developed. It includes robotics, visualization and machine learning,” co-founder and CEO Daniel Glozman tells TC. “Together, this will allow physicians to democratize surgeries. All physicians around the world will be able to perfect this procedure and perform ophthalmic procedures in a more uniform way.”

ForSight has an impressive pedigree for an early-stage startup. Notably, Intuitive Surgical and Auris Health co-founder Dr. Fred Moll sits on the company’s board, along with Mako Surgical’s Rony Abovitz and Mithril’s Ajay Royan. Joining them are a half-dozen ophthalmic surgeons rounding out the clinical advisory board.

As we noted last year, medical and surgical startups have been a hot category for VCs — particularly in the seed stage, which accounts for about a quarter of total funding. Some 600-700 companies received funding in 2019. ForSight seems to have the pedigree and interest to match. The company’s goal is to offer its technology to a variety of different markets, in order to level the playing field for access to quality eye surgery.

3 reasons why investors are turning towards auto service startups