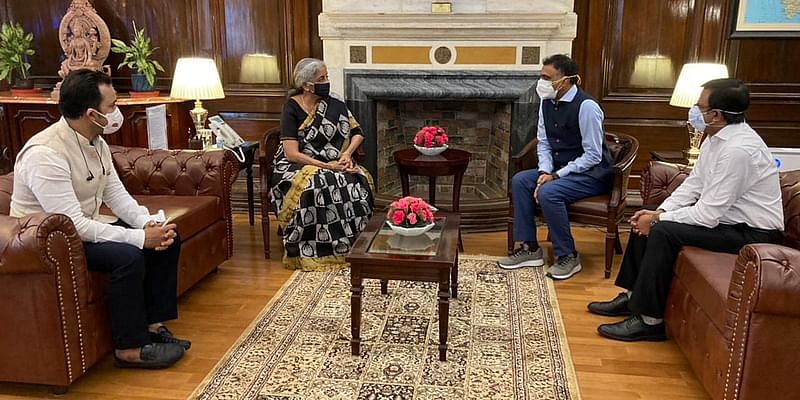 The Finance Minister’s office tweeted a picture from Sitharaman’s meeting with Krishnamurthy.

While details of the meeting were not shared, sources said the top executive informed the minister of the company’s engagement with sellers, especially micro, small and medium enterprises (MSMEs).

Emails sent to Flipkart did not elicit a response.

More than three lakh registered sellers from across the country are on Flipkart’s marketplace, and 60 percent are from tier II cities and beyond. Flipkart also works with more than 1.6 million kiranas in India through its wholesale business and its last-mile delivery programme

With more than 350 million registered users from across the country, the Walmart-owned ecommerce platform has been investing in key categories, including fashion, travel, and grocery. Venturing into the social commerce space, Flipkart recently announced the launch of Shopsy that will encourage local entrepreneurship.

Founded in 2007, the Flipkart Group includes Flipkart, fashion speciality site Myntra, Ekart (logistics and supply chain arm), Flipkart Wholesale, and Cleartrip. The Group is also a majority shareholder in the digital payments platform, PhonePe. In 2018, Walmart Inc invested $ 16 billion for acquiring 77 percent stake in Flipkart, and earlier this year, led a $1.2 billion funding round in the e-commerce company.

Last month, Flipkart had raised $ 3.6 billion (about Rs 26,806 crore) in funding for a valuation of $ 37.6 billion, with its main owner Walmart joining SoftBank, Singapore’s GIC Pte, and several sovereign wealth and pension funds.

Ecommerce has witnessed massive growth in the country over the past few years.

The pandemic has further bolstered growth as containment measures introduced millions to the convenience of online shopping while prompting seasoned online shoppers to buy more.

Social distancing compulsions, massive smartphone base and reliable broadband have galvanised ecommerce uptake beyond metros, deep into smaller cities and towns. Ecommerce platforms are ramping up capacities and hiring aggressively to cater to the growth in order volumes.

Flipkart is reportedly working towards an initial public offering (IPO), even though the company has not revealed a specific timeline for the same.

Earlier this week, Walmart had said its operations in markets such as India and Mexico had pushed its international business growth by 13 percent in the second quarter ended July 31.

In a statement on Thursday, Flipkart Wholesale — its digital B2B marketplace — had said its plans to more than triple its geographical footprint in India to close to 2,700 cities.

“Launched in September 2020, Flipkart Wholesale has witnessed strong growth in the first half of 2021 spearheaded by the adoption of ecommerce by retailers and kiranas. Ecommerce adoption by kiranas on Flipkart Wholesale doubled in January-June this year compared to last year,” the statement said.

This is projected to see 180 percent growth in July-December 2021, as against the same period last year, it added.

Flipkart Wholesale said it has also seen a surge in suppliers that have come onboard on the digital B2B marketplace. “The supplier base is expected to grow 58 percent in 2021, which will further boost the local business ecosystem as well as livelihoods,” it added.

Flipkart Wholesale witnessed 17 percent growth in its Kirana customer base in January-June 2021 compared to the same period last year, and this is projected to grow by 33 percent in July-December 2021 (from the year-ago period).

In July last year, Flipkart had announced the acquisition of Walmart India for an undisclosed amount and launched Flipkart Wholesale to tap into the $650 billion B2B retail market in India.

“We launched Flipkart Wholesale with an aim to bring prosperity to the B2B retail ecosystem and solve local pain points of kiranas across the country. Despite challenges induced by the pandemic, we have seen a strong response from kiranas who are now realising the benefits of digitisation and warming up to ecommerce as the go-to means of purchase,” Adarsh Menon, Senior Vice President, and Head – Flipkart Wholesale, said.

He added that the company will continue to leverage the technology strengths from the Flipkart group and enhance livelihoods and local supplier ecosystems across the country.

Registration for above 18-years to start at 4 pm today