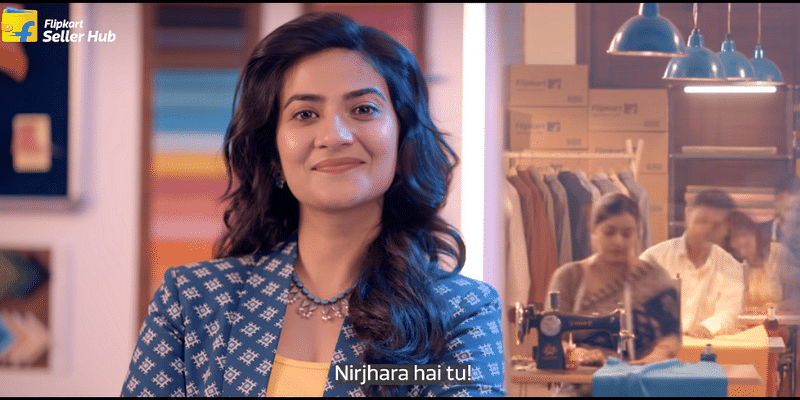 Putting the spotlight on women-led businesses across the country, Flipkart Seller Hub’s ‘Nirjhara’ showcases the boundless and unstoppable nature of women who work relentlessly to overcome numerous challenges everyday.

The film opens on a night scene at the actor’s (Aditi Sharma) textile factory when her manager calls from the factory, apprising her of the urgency of the awaited delivery. Aditi is seen waiting for the driver to take the goods from the warehouse to the delivery location. With the urgency only rising as the driver is unable to reach the warehouse to make the delivery, it gets worse when it also starts to rain. However, she decides to take the mini truck, making the successful delivery to the factory by herself.

With this impactful scene in which the protagonist takes charge and drives the mini truck, the stereotype against women of only being able to do certain tasks and not capable of others, is shattered with just the handover of a key.

Not just that, in a short span of 60 seconds, the film beautifully captures the various emotions the protagonist goes through like worry, care, courage, satisfaction; along with a brilliant display of the characteristics that make her the entrepreneur she is, making everyone wanting to #RiseLikeHer.

With ‘Nirjhara – #RiseLikeHer’, Flipkart Seller Hub portrays the journey and efforts of countless women sellers who have risen to the occasion and carved their way to success. As they call it – a tribute to women entrepreneurs and leaders who lead from the front.

The film is live on the YouTube channel of the brand (Sell on Flipkart), official social media platforms, and the app.

Art-E MediaTech, the film has been directed by Tejender Sharma and produced by Gibbous films.

Rohit Sakunia is the executive producer of the film.

How to Create a Private Discord Server for Customers