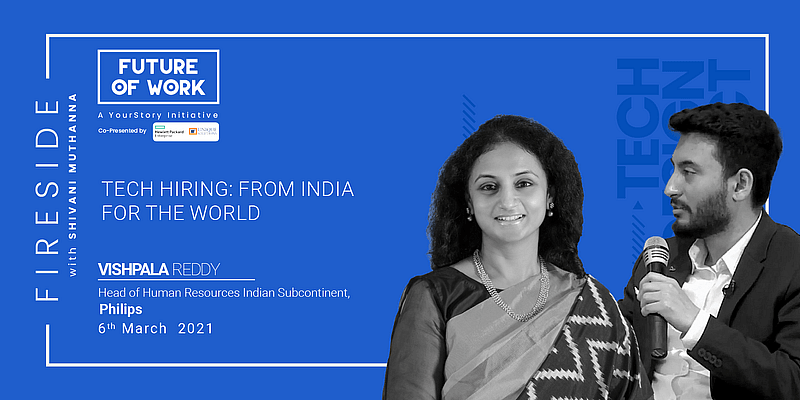 According to the Indian Staffing Federation, the Indian tech industry will add three million new jobs in the next five years. With these additions, the size of India’s tech army is expected to touch seven million by 2023.

At the Future of Work 2021, YourStory’s flagship product, tech, and design conference, Vishpala Reddy, Head of Human Resources for Indian Subcontinent, Philips, discussed the unprecedented scale and scope for India’s tech talent. She also spoke about the emerging trends and skills in the tech arena as it hires from India for the world.

Talking about the trends observed in the industry in the last few years, Vishpala summarised it in one word – growth.

Even in a year like 2020, she said Philips significantly added tech roles to its headcount. Almost 10 percent of its existing workforce is majorly skilled in the tech space. Most organisations have moved up the value chain and are looking to hire talent from India for Machine Learning, UX design, Cloud tech, IoT, and mechatronics, which is relatively new, she added.

The demand-supply equation for tech hiring

For most countries, India is the number one location where they have the largest IT or tech workforce. “Even though there are other pockets of talent where India contributes, our country dominates the tech space in terms of the volume of work today,” said Vishpala.

This ranking is driven by two things. The first being the demand-supply equation in tech hiring being balanced so far, and the second, the quality of talent India has because of its infrastructure.

“If you look at the number of Indian origin technocrats sitting outside of India, it speaks volumes about what India has contributed to the world,” she said.

Vishpala believes that today the demand-supply ratio is neck-to-neck in India as the gap varies depending on the company, industry, and skill. There are some skills that are extremely niche, which take a longer time to fill. Since India has good talent, there is intense competition. She said, today, we’re not only looking at newer talent pools, but also existing ones.

“We’re at the cusp to say that if you continue growing at the same pace, then the gap will really expand.”

How to deal with expanding gap in tech skills?

The number of resumes is not the issue, but the quality. “What matters is whether you can actually take people straight to work with a lower lead time,” said Vishpala.

A lot of organisations, including Philips, have started partnering with institutions to influence students to learn skills or technology that they need to know before they get into the workforce. “Catch them young before they graduate. Co-curate curriculums with colleges and it will give you a better ROI,” she said.

Another way to deal with the gap is by tapping into the emergence of the gig economy. Today, if you look at the distribution of talent, the job availability of certain niche skills are only in Tier I and Tier II cities. “We need to tap into other locations as a lot of women marry and move across cities. Apart from a full-time employee, other forms like project or contract-based employment need to significantly increase, thus enabling demand-supply equilibrium,” she said.

Empowering women in the IT workforce

Statistics show that women make up 34 percent of the IT workforce, with a majority under the age of 30. The challenge for India is to close the gender diversity gap in middle management and leadership roles, and several organisations, including Philips, have made it a priority focus area.

What works for Philips is having strong role models. At the Philips innovation campus, where a lot of interesting work around technology takes place, they have experienced Philips veterans, but at the helm of it is a woman leading the entire centre. “Having strong women leaders set an example helps influence other women, and we can build that across the larger ecosystem,” said Vishpala.

Philips also has internal programmes targeted at retaining and developing its women workforce through employee networks, mentorships, talks, etc. Few companies have also started the concept of bringing back women who have taken breaks into the workforce and giving them a platform to restart where they stopped.

Vishpala said, “At Philips, inclusion and diversity is serious business commitment. Globally, we aspire to have 30 percent of the workforce at the senior-most level as women and that cascades to all our markets.”

For jobseekers out there, Vishpala has one piece of advice – “Tech hiring is the future. It’s the right skill to pursue your career, and India is the best place to be, with organisations doing amazing work, and global products being housed and built here. Make the best of it, because we need you.”

Why blockchain, AI and GS1 serialisation will define the future of global supply chain

Fraud cannot be obfuscated by nationalism: Hindenburg on Adani “loot”