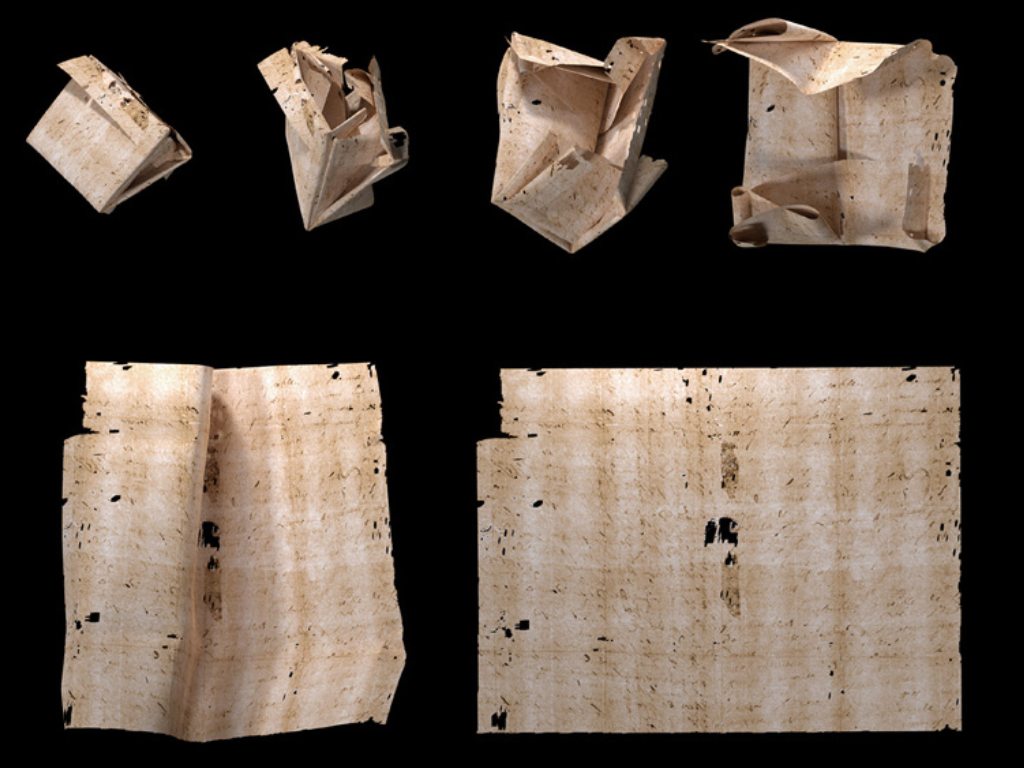 A team of scientists have scanned four letters that were sealed for the last 300 years using an X-ray microtomography scanner. The letters were from the Brienne Collection, which was a trunk filled with 2,571 unopened letters. The trunk belonged to a postmaster and postmistress couple — Simon and Marie de Brienne. The letters originated from all over Europe and were sent to the Dutch postal museum in Hague, the Netherlands for safekeeping. As reported by Sci News, researchers at the Queen Mary University of London have used the X-Ray scanner with high sensitivity to ‘resolve certain types of ink in paper and parchment’. 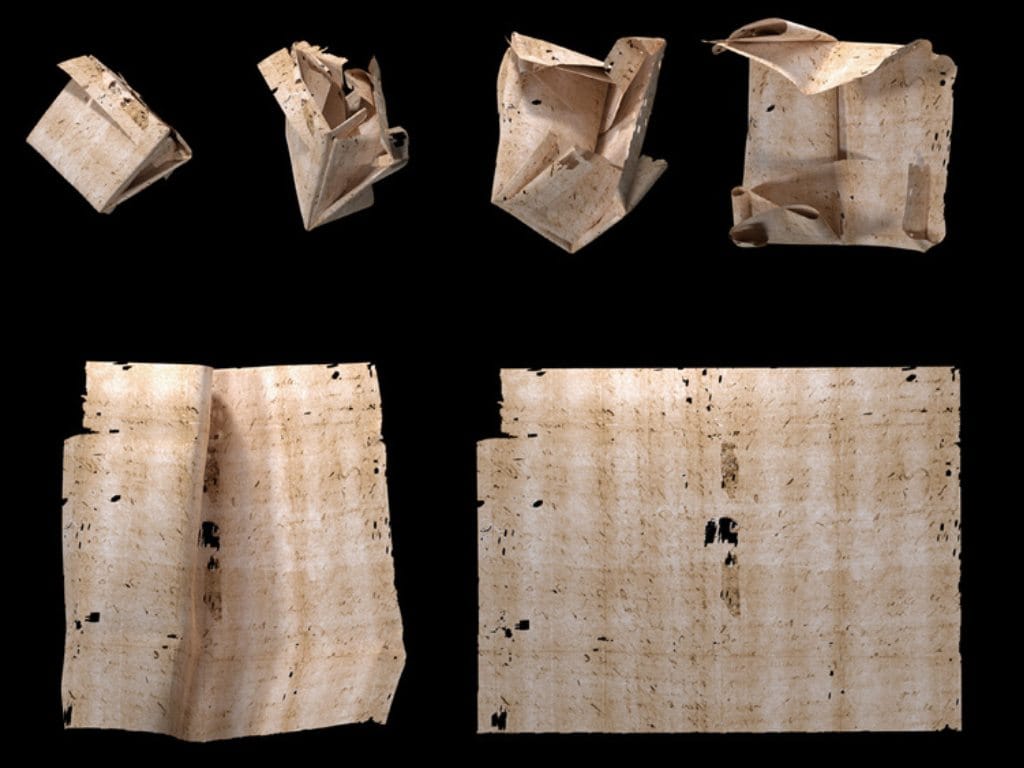 Using computational tools, a research team was able to virtually unfold an unopened letter from 1697.
Credits:Image: Courtesy of MIT Libraries

An X-ray microtomography scanner uses X-rays to create cross-sections of a physical object that can be used to recreate a virtual model (3D model) without destroying the original object.

One of the letters which were studied by scientists is dated 31 July 1697 and was written to a French merchant who was living in Hague. Written by his cousin Jacques Sennacques, the letter asked merchant Pierre Le Pers to send Jacques a certified copy of the death notice of a person named Daniel Le Pers.

Researchers also used applied computational algorithms to scan images. They used algorithms to virtually unfold it and according to the scientists, it has helped them “get to the heart of a locked letter.”

The scanner was initially designed to map the mineral content of teeth but it has also been used now to study history. Speaking about their research, Dr David Mills said that the scanning technology which has been used is similar to the medical scanners. He adds that they have been able to see minute traces of metals in the ink by using more intense X-rays than the scanners. 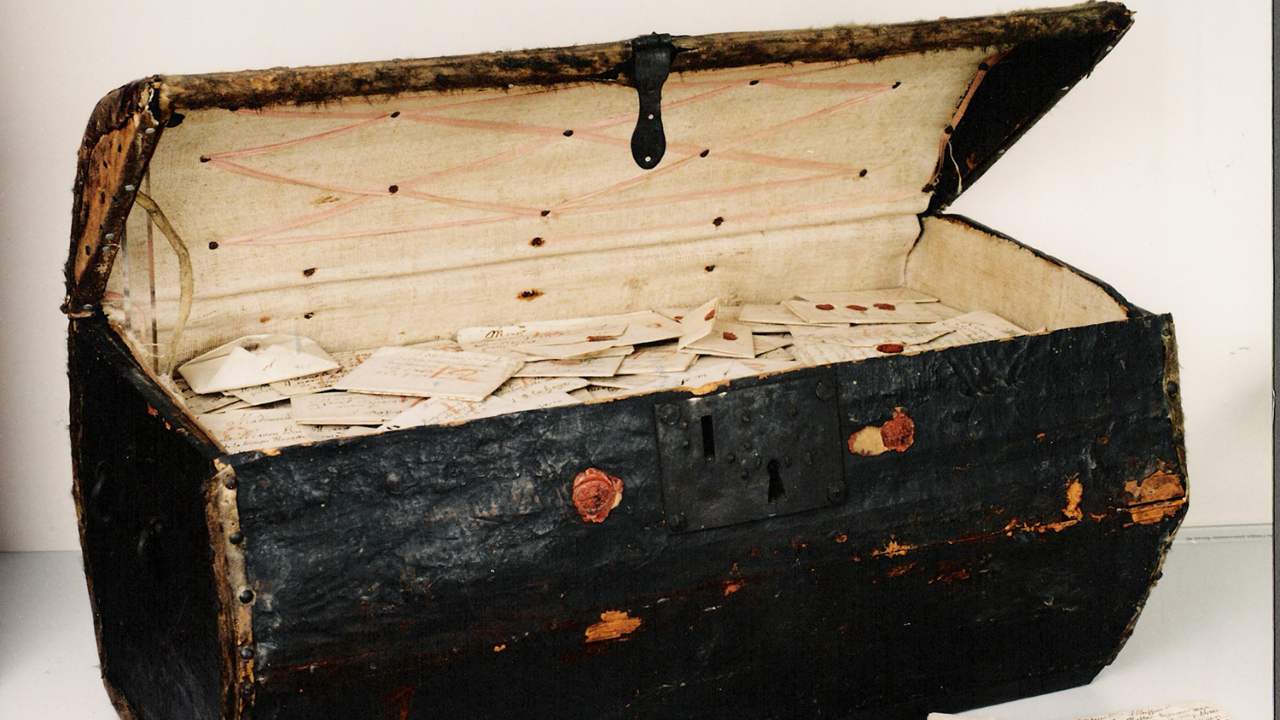 Previously, such locked letters had to be cut open if the researchers wanted to access their content, however, the latest technology makes it possible to access the contents of the letter without damaging its physical integrity.

“Sometimes the past resists scrutiny,” explains Daniel Starza Smith said in a press release. “We could simply have cut these letters open, but instead we took the time to study them for their hidden, secret, and inaccessible qualities. We’ve learned that letters can be a lot more revealing when they are left unopened.”

Published in the peer-reviewed journal Nature Communication, the study was conducted by researchers from the Massachusetts Institute of Technology (MIT) as well in collaboration with those at the Queen Mary University of London. The study was published on Tuesday, 2 March.

Connect all your devices seamlessly with these top adaptor cables- Technology News, FP

You don’t need to worry about COVID vaccines being ‘unnatural’ or ‘synthetic’-Health News , FP

Amazon to copy TikTok’s feature that allows users to shop for products from social feed of videos and photos- Technology News, FP