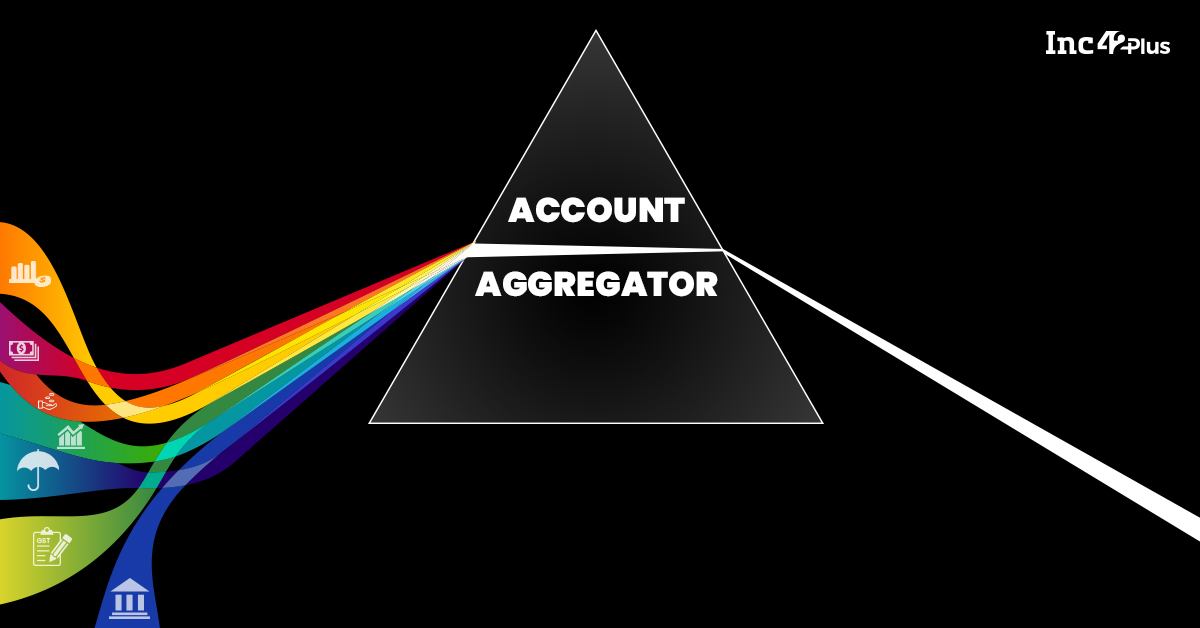 It is fintech’s moment to shine. The developments are coming rapidly in this sector, with the account aggregator being the biggest one this week. Besides this, the impending IPO of Paytm, as well as the mutual fund ambitions of Zerodha, PhonePe and others, have also grabbed the headlines.

Before we delve into this in detail, here’s a quick look at the top stories this week, which are also dominated by fintech:

India’s lending sector has often complained about the lack of trustable and structured data when it comes to risk modelling for the credit-hungry MSME segment. And similar problems exist in the delivery of other financial services such as insurance or banking. But that is set to change with the launch of the account aggregator (AA) architecture for the Indian fintech and banking industry.

The success of AA will depend both on how far it would help reduce the entry barrier to accessing financial services as well as the customer protection that it would provide. Leading fintech companies are already a part of the account aggregator ecosystem and are building use cases for it.

“Credit score has existed in India since 2004. But people still had difficulty in accessing it but when we started providing credit scores as a product it made a huge difference for our customers. We will see a lot of service providers offering account aggregator solutions as well to help customers make smarter financial decisions,” said Naveen Kukreja, CEO of IPO-bound loans aggregator Paisabazaar.

Without a system like AA, banks and financial institutions use different protocols for risk assessment. There was always a concern about not having interoperability with other protocols used by the consumers. Fintech companies can now build products without worry about how to manage risk. They can focus on building their solutions and not the underlying housekeeping of credit underwriting.

While most fintech stakeholders are satisfied with the level of technical security and encryption that account aggregator promises, the need is to inform end-users about how the consent-based mechanism works. “There is a duration for consent as well as a duration for how long the data is allowed to reside with FIUs giving data owners control,” said Sumit Gwalani, cofounder of neobanking startup Fi, indicating that users need to be made aware of these controls to prevent misuse.

The account aggregator systems have to be designed to reduce chances of misuse for customers, said Sucharita Mukherjee, cofounder, Kaleidofin.

“It is important to educate customers about the consent architecture at the delivery point itself (AA app) for consumer protection. A smooth customer experience cannot overlook security so we are working with use cases to ensure that the app reads out (in local language) what the customer is consenting to in addition to biometric and OTP checks,” she added. 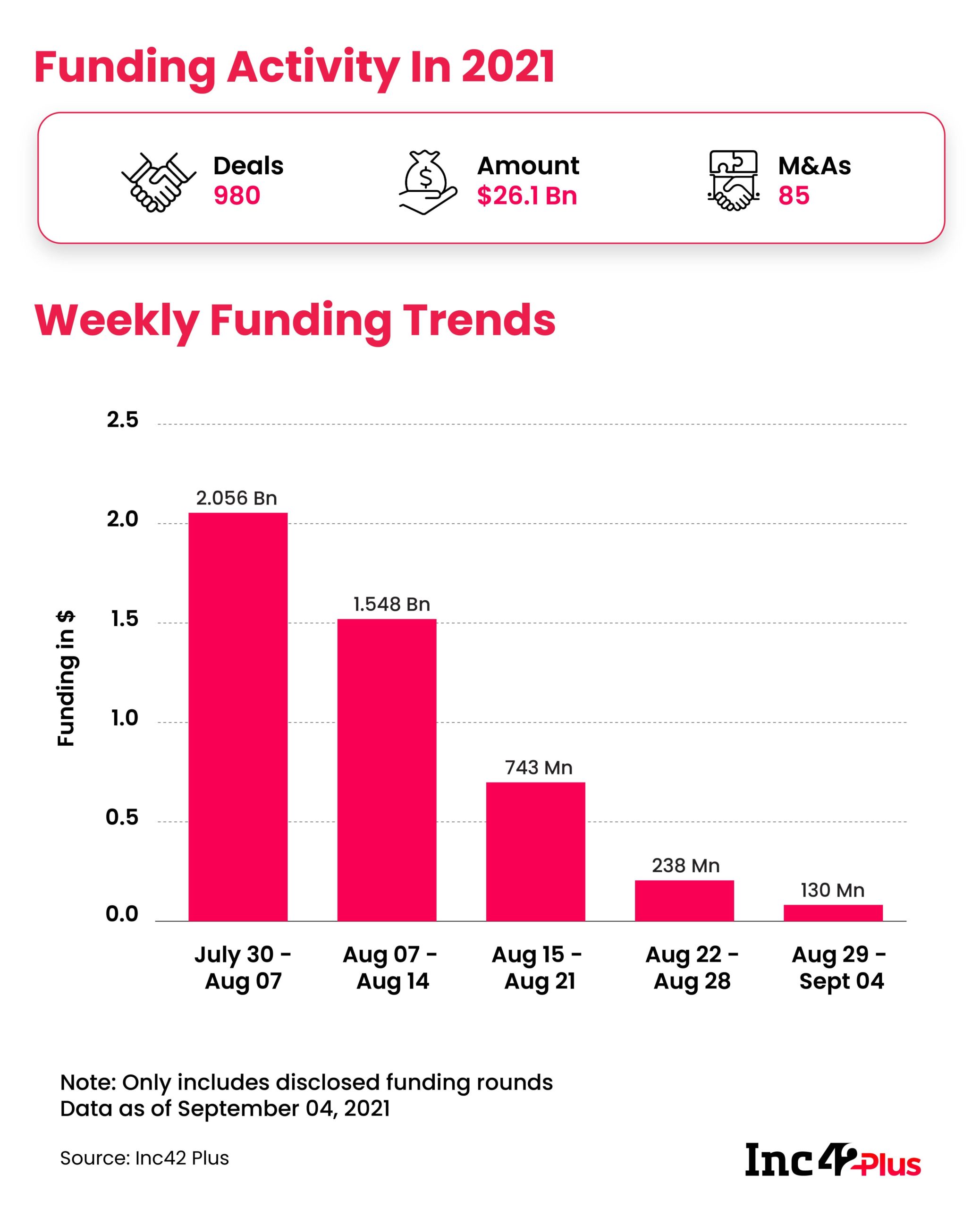 However, overall, 2021 has been a record-breaking year for Indian startup funding in pretty much every aspect. With $26.1 Bn raised in the first eight months of the year, the total startup funding in India in 2021 is already 2x the highest recorded annual funding tally of $13.2 Bn seen in 2017. Overall, the ecosystem has seen 980 deals in 2021 so far, which has already surpassed the 924 deals seen last year.

Among the startups that have already gone public, Zomato and CarTrade had gotten off to shaky starts, but Zomato has now stabilised with its stock price even breaching the INR 150 mark this week. CarTrade also had a solid week on the stock markets, with its shares jumping early in the week and then falling slightly.

Here’s the weekly performance of listed tech companies we are tracking: 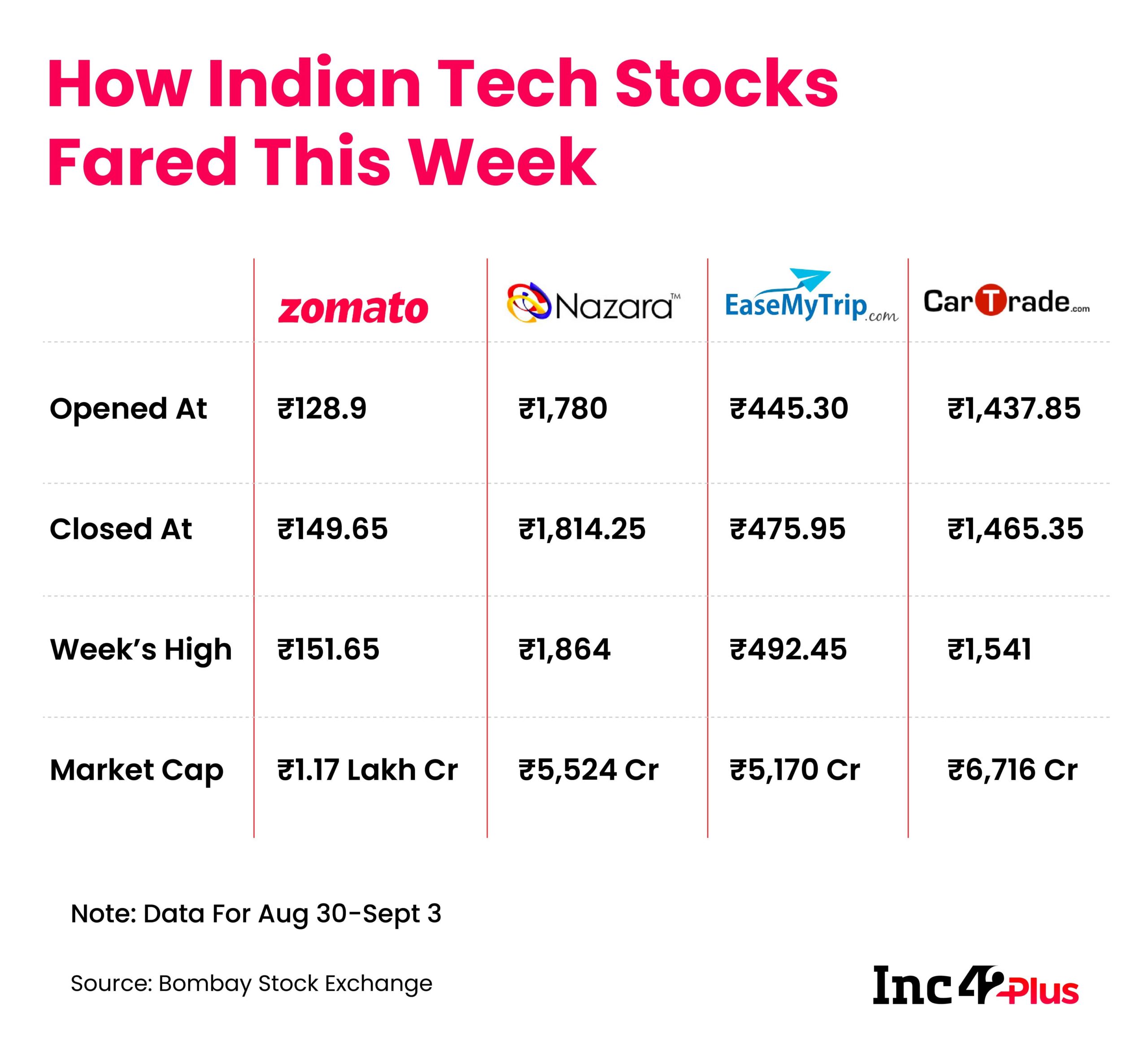 Entering the long list of tech startups heading for IPOs, MapmyIndia, one of the oldest tech companies (founded in 1995) in the country, has also filed for an IPO and is looking to offload 7,547,959 shares in the OFS.

After ecommerce biggies Flipkart and Nykaa, now Snapdeal is also considering (reportedly) an IPO that could bring in $400 Mn.

In Spotlight: 30 Startups To Watch

As every month, we scouted for new and emerging startups across India in August too with our 30 Startups to Watch list. On the B2C side, we have picked startups in gaming, fitness, learning and more, while on the B2B side, we have selected startups in sales enablement, manufacturing, finance management, SME-focussed applications and anti-counterfeiting solutions.

Take a look at our picks in the 19th Edition of the 30 Startups list.

Coming back to our central theme of the expanding universe of fintech products and services. Zerodha, which led among investment tech platforms with $154 Mn revenue in FY20, has got in-principle approval from Indian public and financial markets regulator SEBI to start its asset management business. Zerodha cofounder Nithin Kamath will have to contend with big competition, which he indicated in his tweet. 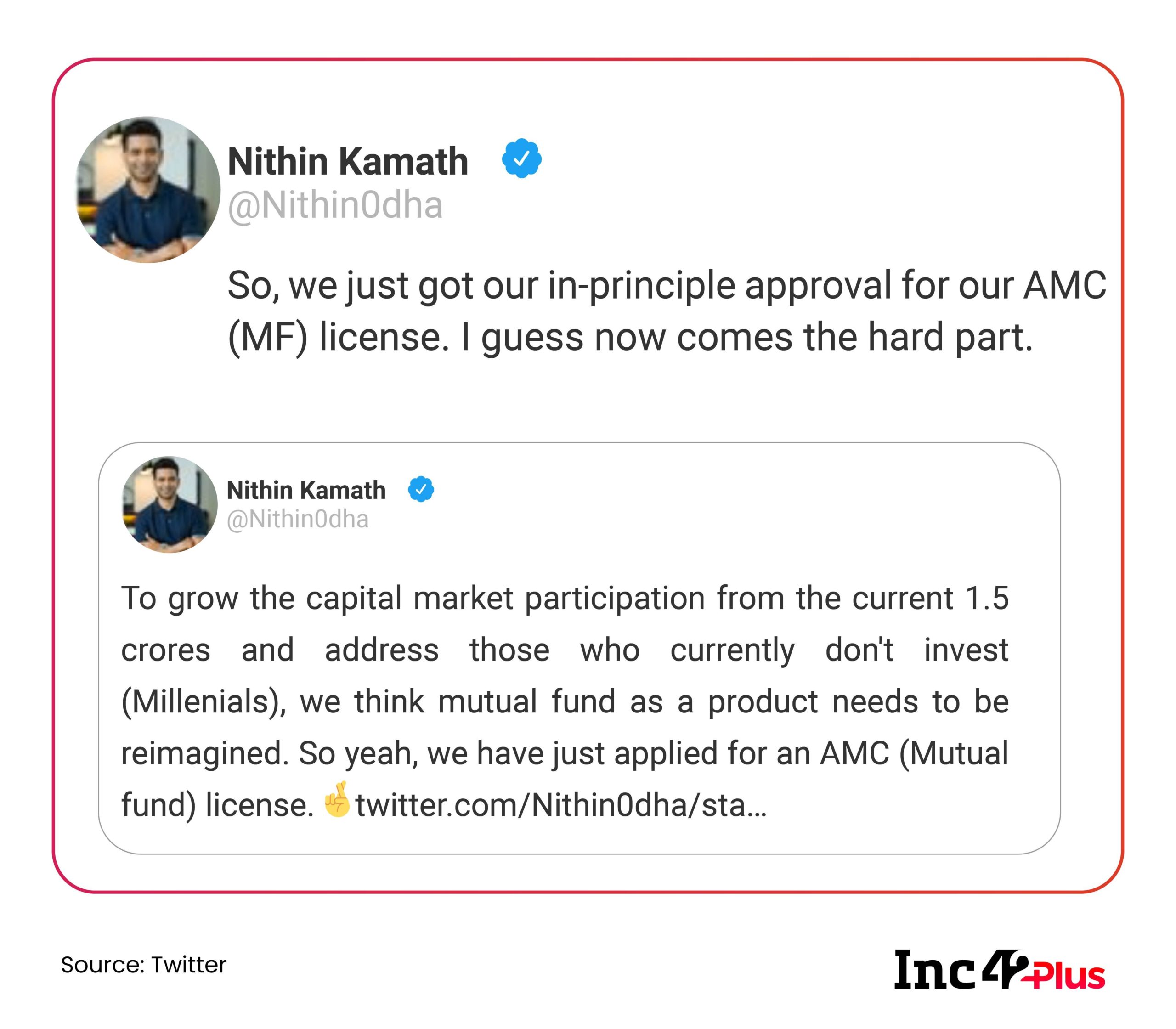 Last month, Flipkart’s digital payment arm PhonePe had also received approval from its board to set up an asset management company. PhonePe is also likely to seek approval from SEBI to launch its AMC business in the coming days. Earlier this year, Groww acquired 13-years-old Indiabulls mutual fund business for INR 175 Cr.

Social media giants have stepped up their efforts to take action against abuse, hate speech and other objectionable content. Facebook, WhatsApp, Instagram and Google all released their latest compliance reports. These companies took action against more pieces of content in the July period than the months before.

Here’s a snapshot of how each platform went about taking action on content: 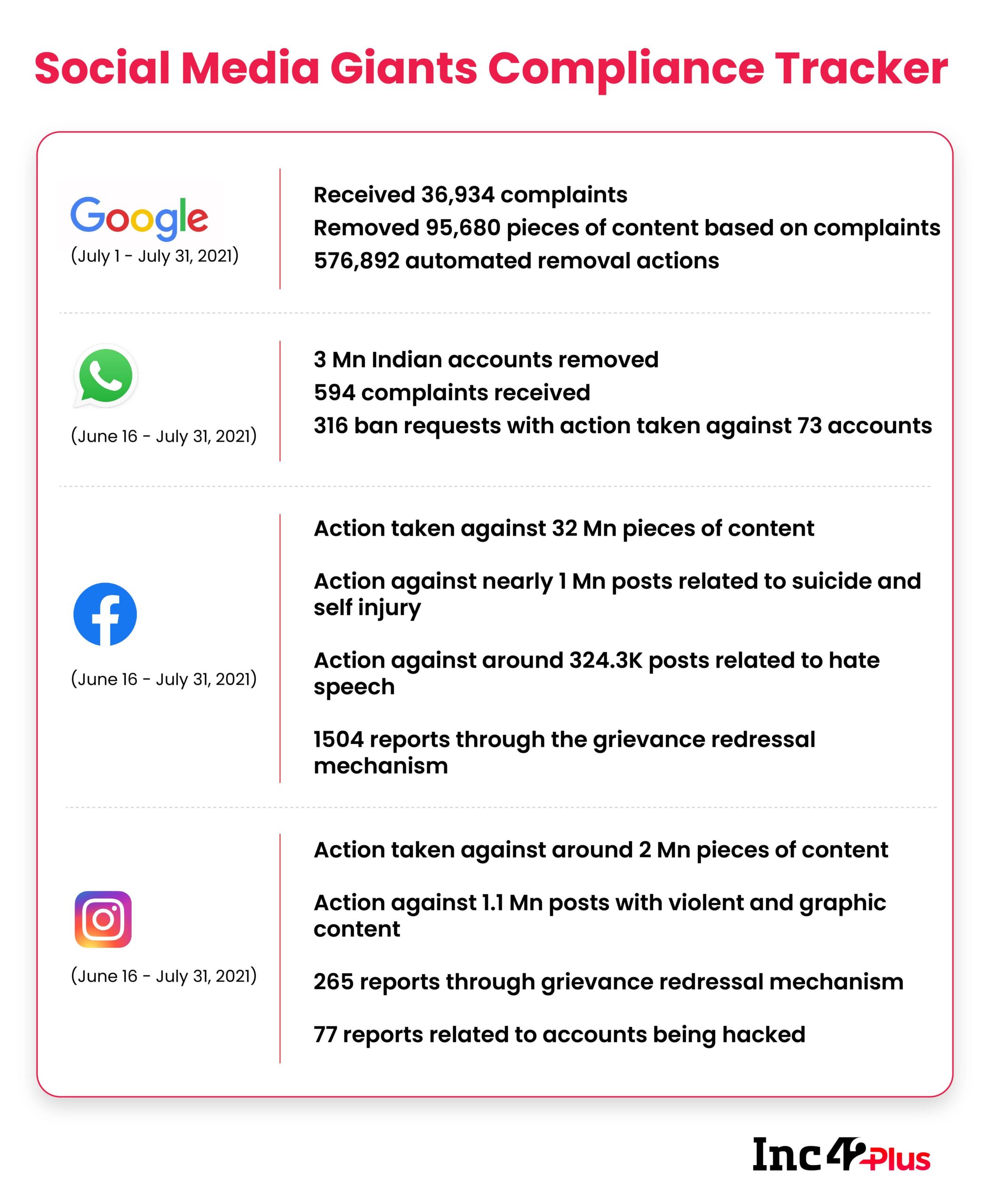 Last but certainly not least, here are some of the other stories that have grabbed our attention this week:

That’s all for this week. Watch out for a more data-packed newsletter every Sunday as we recap the week’s biggest stories and developments.

Till next week,
Team Inc42

Resilience is key to create sustainable and scalable businesses

Harsh Mariwala on entrepreneurship and how he built Marico, a Fortune India 500 company