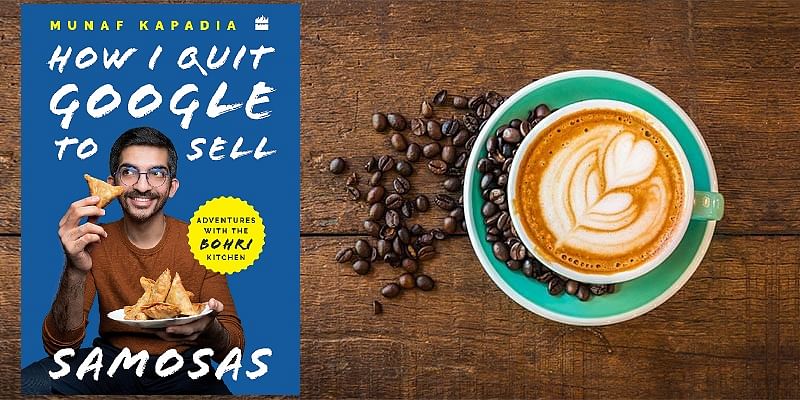 The ups and downs of an entrepreneur’s journey are well captured in the compelling new book, How I Quit Google to Sell Samosas by Munaf Kapadia. The ‘Chief Eating Officer’ of The Bohri Kitchen launched his foodtech venture from his Cuffe Parade home in South Mumbai.

The book is a mix of endearing tale of mother-son love for food traditions, and the roller-coaster ride of a food entrepreneur – particularly in an expensive city like Mumbai, with the pandemic as a later episode. There is plenty of humour thrown in, and some photographs capturing the journey.

The author shows how passion and creativity are important for an entrepreneur – as well as resilience and an ecosystem of support. The 20 chapters make for an entertaining read, and also capture 10 lessons for entrepreneurs (‘Samosa Gyaan’).

Here are my key takeaways from this 220-page book, summarised as well in the table below. See also my reviews of the related books Why I Stopped Wearing My Socks, Funding your Startup, Young Turks, Indian Innovators, I Love Mondays, and Social Entrepreneurship in India.

Munaf graduated from NMIMS and worked at Wrigley India in Mysuru, before joining Google in Hyderabad. “Your first job gets you ready for the next one,” he recalls, describing how it is only professional life after college that brings out one’s strengths, weaknesses, and motivation.

The Google experience was vibrant right from the days of being a ‘Noogler’ (new Googler). As an intrapreneur, Munaf’s activities involved an IdeaFactory forum for moonshot ideas, and helping NGOs optimise their Google Ad Grants. But he discovered that the real dopamine for him came from culinary traditions and the food business.

Munaf’s desire to help his mother monetise her culinary talents (“more than just watching TV at home”) led to the launch of The Bohri Kitchen (TBK). It drew on the food traditions of the Dawoodi Bohra community, with a blend of Yemeni Muslim and Gujarati influences.

The home dining experience delivered authenticity through its community setting with traditional décor, and his family’s hospitality. The food itself is served on a large thaal (three feet in diameter), with delicacies described in mouth-watering details. The group consumption leads to community bonding as well, Munaf observes.

“The world’s best brands and businesses are built on authenticity, creativity, and their ability to give customers something unique,” he affirms.

TBK was promoted extensively on social media, and word spread virally – thus eliminating the need for roping in a PR firm. Though home chefs were generally not considered on par with professional chefs, TBK found success, with home meals priced from Rs 1,500 to Rs 6,000.

While the supply of regional cuisines in India is staggering, most of these cuisines are under-represented in the F&B sector, Munaf laments. There are lots of opportunities for housewives to become home chefs and monetise their culinary heritage – a micro-entrepreneurship theme which Munaf later promoted to the Maharashtra government as a strategy to promote tourism.

Along the way, he also evaluated starting a home chef platform business for scale, called The Dining Table. But subsequent market research revealed that this model had not worked well, so it was put on hold.

The road to growth

Aspiring entrepreneurs, particularly in the food business, will appreciate the author’s detailed descriptions of the wins and losses along his journey. This included a botched experiment to showcase TBK at a music festival in Pune (the hired kitchen venue was too far, the food court venue was not close to the crowds, the home recipes were difficult to standardise or teach other chefs).

The delivery option was launched with a separate cloud kitchen in Worli, but early problems of ensuring consistency in quality and packaging led to some negative reviews. Lack of a focus on accounting and finance led to stress and even mental problems, for which Munaf had to rope in the services of a therapist.

Then came a string of breaks – being featured in Forbes’ 30 under 30 list in 2017, getting showcased in the Living Foodz and Grilled TV shows, and winning a series of catering orders and even home visits by Bollywood stars.

“One of the few perks (there aren’t many) of being in the F&B space is that you get to meet people from all walks of life,” Munaf enthuses.

“Raise fun, not funds,” Munaf jokes, describing how love and passion are as important as finances and partners for growth. He roped in former Google colleague Mihir Mehta as his investment banker, and lined up a series of investors.

The pitch clinchers were Munaf being smart enough to join Google, committed to his passion enough to leave Google, and a mission to “make Bohra food exciting for non-Bohras”.

A new delivery kitchen was set up in Worli, involving lengthy processes for government approvals and licenses. TBK’s first QSR was set up at Flea Bazaar Café in Kamala Mills in 2018.

Funds should be raised for the long haul, Munaf explains, since fundraising is a demanding activity. By August 2019, TBK was doing sales of Rs 35 lakh per month – but would need Series A funding to scale further.

“When I break it down, there are three things that I committed to at the very beginning of my journey and continued to relentlessly devote time and energy to: (a) a damn good story (b) retelling that story at every opportunity I got and (c) continuing to build on the story over time,” Munaf emphasises.

“You need to have a story worth telling,” he adds, particularly in a crowded market. “The story needs multiple arcs, each with its own purpose,” Munaf explains.

He describes this approach as “3D branding” – product, visual identity, and emotion. “The last can be brought out through faces, names of real people, the story – all of which are woven into a storytelling and brand language,” Munaf writes.

One whole chapter is dedicated to the story of his mother, born as Nafisa Masalawala. She was trained in Bohra heritage cuisine by her Dadi, and her mother herself was a fantastic cook. Nafisa committed to family life after her marriage, and the TBK venture later scaled up her culinary profile, winning her new fans.

The story, combined with the inherently unique and marketable Bohra cuisine, helped the virality of the brand, Munaf affirms. The cuisine was distinct but also had mass-appeal items like biryani and samosas.

Digital storytelling and gamification helped customer engagement further – even with those who had never consumed Bohra food. Munaf also gave hundreds of talks at conferences, founder circles, and TEDx stages.

“There is so much to be gained from a home dining experience apart from a good meal – it can foster good will, relatability, and a richer understanding of communities that are different from our own. In fact, TBK has helped me realise what it means to be a Dawoodi Bohra myself,” he writes.

One whole chapter drills down into metrics and rules of the hub-and-spoke food business – including unit economics, organisational hierarchies, and food partnerships.

For example, Munaf recommends that a large portion of the menu should be outsourced to other partners (with clear NDA rules), cash collection be contracted to banks, and a dedicated customer care executive appointed for taking orders.

Another chapter shows how the business aspect of culinary heritage can be extended to the tourism sector, by monetising the stories of local communities and heritage. Government support and promotion by travel agents could help in this regard, Munaf explains.

Munaf’s other visions include replicating the home dining model to other Bohra homes in cities across the world, and opening a flagship restaurant someday.

Unfortunately, the onset of the COVID-19 pandemic forced TBK to let go of more than 70 percent of its staff and shut the new outlets. Sales came down by half, to breakeven level – only home dining and catering for other family dinners remained.

“Entrepreneurship, by definition, is a marathon of sidestepping, overcoming and sometimes being defeated by the challenges that you face as a business owner,” Munaf writes. The company began to get back to its feet in early 2021, but ran out of working capital to restart operations in June this year.

“I have learnt not to fear failure – what is important to me is to know that I have tried my best,” Munaf signs off.

How Cloud ERP is the key to becoming an intelligent and sustainable business enterprise?