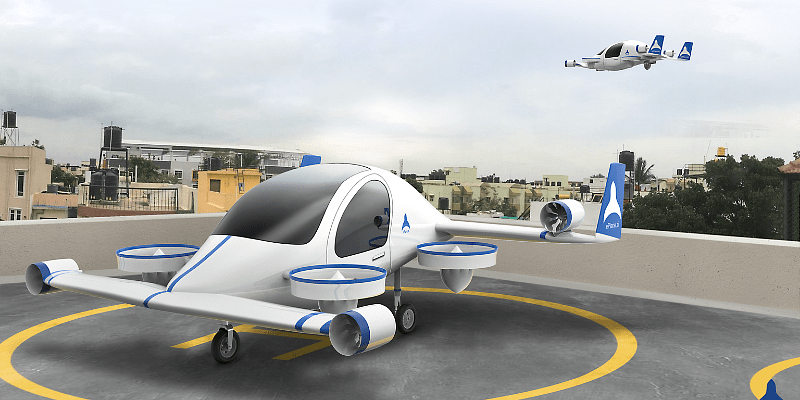 Chennai-based electric aircraft startup, The ePlane Company, has raised $5 million in Pre-Series A round of funding led by Speciale Invest and Micelio, as it aims for cheaper and environmentally friendly intra-city transportation.

Others who participated in this round include Naval Ravikant, 3one4 Capital, UTEC (University of Tokyo Edge Capital), Anicut Capital, Infoedge, Prashant Pitti (Co-founder of Easemytrip), Thought Ventures, Java Capital, and Firstcheque.vc. The startup had earlier raised $1 million in March last year.

The ePlane Company, which was incubated in IIT Madras by Professor Satya Chakravarthy and Pranjal Mehta, was founded in 2017, and has already test flown a lab scale prototype. It is on course to do a full scale prototype in April this year.

In an interaction with YourStory, Satya said their latest funding found was oversubscribed, and they pegged the total amount raised to just $5 million.

The startup is looking at transport option for passengers as well as cargo for its electric aircraft. The product is currently under various stages of development, and the company has also got into preliminary discussions on the commercialisation of its product.

“The USP is that we are making the most compact flying taxi in the world, which has a hybrid design that uses both rotors and wings, and a subscale prototype that enables it to fly slower than e-planes with compact wings would normally require. Further, our product will not have any dedicated infrastructure requirements and can make the city commute ten times faster at just 1.5 times the taxi fare.”

Adding to this, Satya said, “We have currently tested a scaled-down prototype and expect to have our first cargo plane ready as early as next year. The cargo carrier is expected to be rolled out by February 2023; the passenger version is expected by December 2024.”

According to the founders, the compactness of the aircraft, along with its ability to fly in low altitude and for longer duration, makes it a valuable asset for those looking at multiple hops within a city. Also, the liberalised regulations around drone vehicles has facilitated the growth prospects of The ePlane Company.

The startup also aims to help in the expansion of the ecosystem around electric aircraft design and manufacturing. According to Satya, “It makes more sense to make electric planes than a combustible engine aircraft, which is much more complex and expensive.”

The ePlane Company will use this latest round of funding towards talent hiring, R&D and towards necessary certifications.

On funding the startup, Vishesh Rajaram, managing partner, Speciale Invest, said, “The ePlane Company is one of the unique companies with the vision to create technology that will make India self-sufficient. It aligns with our vision of backing disruptive companies solving global problems via tech innovations very well.”

‘Virtual work will be the future, even more than now’ – in conversation with Theresa Sigillito Hollema, author of ‘Virtual Teams Across Cultures’

With Paytm, ShareChat, and Bigbasket as its clients, how YC-backed Able Jobs is making entry-level jobs easier