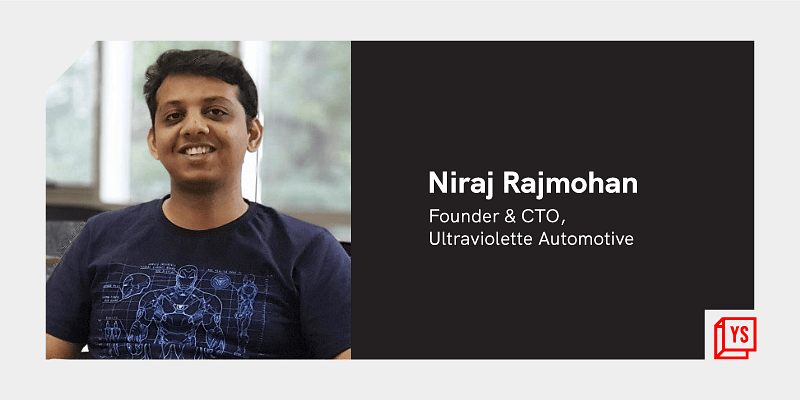 Bengaluru-based electric two-wheeler startup ﻿Ultraviolette Automotive Pvt Ltd﻿ has reportedly raised $14.85 million or Rs 112.5 crore from TVS Motor and Zoho Corporation in a Series C round, according to an MCA filing dated December 8, 2021.

TVS Motor Company led the round, infusing $9.9 million (Rs 75 crore) in Ultraviolette Automotive. Zoho has invested $5 million (Rs 37.5 crore) for a 2.46 percent stake in the venture.

Founded in 2015, Ultraviolette designs, develops and manufactures electric two-wheelers and their accessories.

The startup raised Rs 50 crore of capital in a Series B round in October last year from TVS Motor and GoFrugal.

The Chennai-based two-wheeler manufacturer held 29.48 percent stake in Ultraviolette as of FY2021.

Narayan and Niraj, founders of Ultraviolette

Kumar Vembu, who is the director of Ultraviolette and leads GoFrugal, owns 13.91 percent stake at Ultraviolette. Its founders Subramaniam Narayan and Niraj Rajmohan own 18.77 percent and 16.04 percent, according to the valuation report dated September 30, 2021.

The EV startup has released its flagship product, F77, which comes in three variants: Airstrike, Laser and Shadow. According to its website, its EV bike has a range of 130-150 km with three battery packs. It has already launched the prototype of electric motorbike and has plans to enter into the production of electric bikes by March 2022, according to the MCA filings

The startup has not reported any revenues from operations earned up until September 2021.