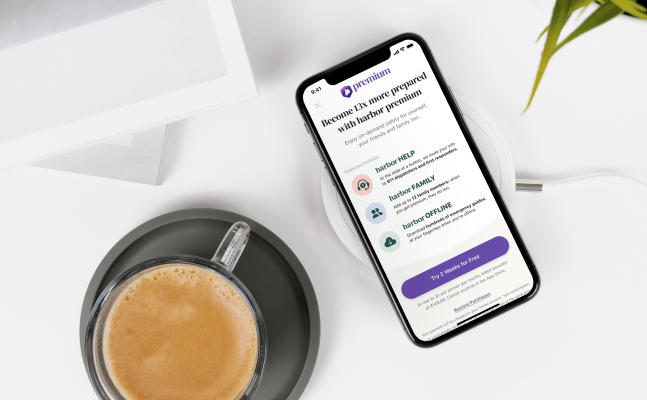 Harbor, an app that gamifies emergency preparedness, has today announced the launch of a premium tier that includes features like an emergency button called HarborHELP that it has built in partnership with home-security company ADT. The premium subscription also includes a family plan, which lets paying users add up to 12 other users to the account.

The startup picked up $5 million in funding back in August of 2020 from a single investor called 25madison, a New York-based venture studio that incubates and funds companies from inception. The venture studio also brought on Dan Kessler, a former Headspace executive, as CEO in January. Kessler, in turn, brought on Eduardo Fonseca as chief technology officer, who previously served as CTO of GoodRx.

Harbor allows users to get a risk assessment of their home, as well as customized (gamified) lessons around how they can prepare for specific emergencies that may befall them. Once emergencies have been selected, the user is given weekly tasks based on the various preparedness involved, such as storing water, checking smoke detectors or having a stocked go-bag.

The idea behind Harbor is to parse out a relatively large project over a longer period of time, breaking it down into bite-sized tasks. Of course, some are more lightweight than others — they can range from checking the smoke detector battery levels to taking CPR training.

These tasks are also paired with an educational quiz, asking users questions about things they need to know during an emergency, such as how to purify water.

The company also has a referral business through its own curated e-commerce site.

With today’s launch, Harbor adds another link in the chain through its partnership with ADT. It provides nationwide coverage to Harbor users. When they hit the emergency button, they’re sent a prompt asking if they’d like a phone call or a text message. Within seconds, they’re connected to an ADT dispatcher who can determine next steps, whether it’s sending the fire department, an ambulance, or some other first-responder organization.

If a user doesn’t choose between the text or call prompt and does nothing, ADT will send someone to the user’s phone’s location anyway, in case they’ve been harmed in some way.

“ADT is allowing Harbor to use a fairly expensive nationwide network,” said Kessler. “So, there is obviously a financial aspect to the relationship but I would say that the core of this relationship is indeed strategic. We have very aligned visions as companies and we’re helping each other do something that we can’t do by ourselves.”

As part of the premium launch, Harbor is also introducing an Offline feature, which automatically saves important information during an emergency directly to the phone should cell or wifi service go down.

Harbor has been investing heavily in its risk assessment algorithm, adding a handful of new data sources over the past several months to give a highly personalized and accurate risk assessment to users. Data sources employed by the startup include household details, NOAA, FEMA, and USGS data points, land maps, building codes, and other private data sources.

How To Boost Sales On An Ecommerce Platform During The Pandemic

These 13 Benelux-based fintech startups have raised funding this year; check them out

The Startup Magazine What is Growth Financing (and How Much Can You Expect to Receive?)