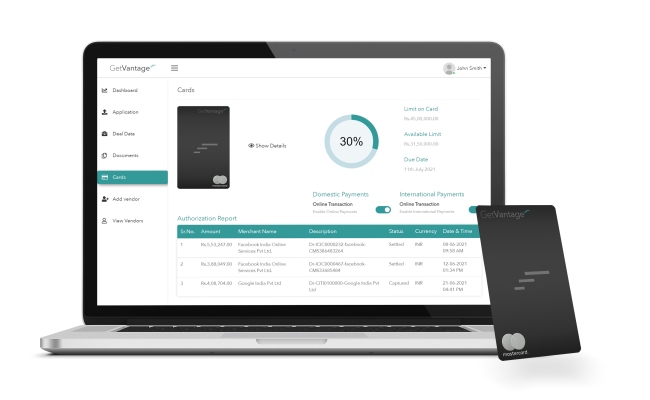 Some SMEs don’t want to get (or have access to) equity funding, but also want to stay away from high-interest bank loans. That’s the gap that revenue-based financing platforms like GetVantage want to fill. The Mumbai-based startup announced today that it has raised $36 million in equity and debt led by Varanium Nexgen Fintech Fund, DMI Sparkle Fund, along with returning investors Chiratae Ventures and Dream Incubator Japan. Varanium Capital partner Aparajit Bhandarkar will join GetVantage’s board.

Other participants included Sony Innovation Fund, InCred Capital and Haldiram’s Family Office. This brings GetVantage’s total raised so far to $40 million, along with a seed round in 2020, the same year it was launched by Bhavik Vasa and Amit Srivastava. GetVantage says this includes several debt lines with non-banking financial companies to help scale its financing platform.

Vasa told TC he co-founded GetVantage after working as chief growth officer at fintech Itzcash. “I came across the ‘ad for equity model,’ a barter deal where media houses take a certain stake in companies in return for advertising and promotions on their platform.” He then moved onto a job at remittance platform EbixCash and after quitting, he said he kept thinking of a way to provide alternative financing to startups.

“The traditional process of raising capital is complex, cumbersome and simply doesn’t work for all enterprises and business owners,” Vasa said. Many online entrepreneurs are underserved, he added, because “the VC model is somewhat broken and really based on who you know.” For founders without the right network, it’s hard to find investors. Some also prefer not to sell control and dilute ownership in their companies.

Vasa said he and Srivastava’s background as founders give them an advantage, because they understand the needs of other founders. The two met while running the Startupbootcamp fintech cohort.

GetVantage gives SMEs equity-free capital between $10,000 to $500,000 USD, with applications processed in about two days, and funds made available in five. It says that about 4,000 businesses have applied for non-dilutive financing through its platform so far, receiving a total of $270 million in funding. Some of its clients include Arata, BoldCare, Eat Better, Jade Forest, Naagin, Nua Wellness, Rage Coffee, Sid Farms and Zymrat.

Financing decisions are made using the company’s algorithms, which it says helps get rid of bias and make the application process faster. Its core tech is a proprietary machine-based learning model called the Credit Decision Engine and cloud-based Deal Management System.

Companies applying for capital connect their digital marketing platforms, like Google or Facebook, and revenue accounts including Shopify, Amazon, RazorPay or Stripe, to GetVantage’s platform. By doing that, they share their business’ spending and revenue for the past 12 months. GetVantage’s Credit Decision Engine then generates a customized term sheet in about 48 hours. After getting funds, clients then repay a pre-determined share of their revenue until they’ve paid back the full principal.

Vasa said companies typically repay financing in about six to nine months. There is no interest, and the company charges flat fees between 6% to 12%. “What is important to understand is that repayments are flexible and completely linked to revenue,” Vasa said. “So if revenue goes up, a company ends up paying back a little more in a particular month. If revenue goes down for some reason, the company pays back a little less that month.”

GetVantage is sector- and size-agnostic, targeting companies with strong fundamentals, recurring revenues and a revenue-vintage of between six to 12 months. Its clients have come from sectors as diverse as SaaS, direct-to-consumer e-commerce, edtech, health tech, cloud kitchens and nutrition. The company claims that it saw 300% year-over-year growth in 2021, and helped its clients achieve 1.8x revenue growth after receiving funding through GetVantage.

For entrepreneurs, GetVantage also has partnerships with a variety of businesses, including in marketing, sales, logistics and payment gateways. For example, vendors on some e-commerce marketplaces can apply for GetVantage funding directly through them, or through various payment gateways, marketing and logistics platforms.

In the long-term, GetVantage has its eye on Southeast Asia and the Middle East as potential markets, but for the time-being, it is “laser-focused” on India, Vasa said, citing statistics that say the market opportunity for revenue-based financing is now $5 billion to $8 billion and expected to grow to $40 billion to $50 billion as the direct-to-consumer market expands to $100 billion by 2025.

In a prepared statement, Bhandarkar said, “At Varanium we look to partner with founders and teams that have a bold approach to solving massive problems. We are thrilled to support Bhavik and the GetVantage management team to help accelerate GetVantage’s next phase of growth and unlock capital and revenues for thousands of fast-growing businesses that will power the future of India’s digital economy.”

Telemedicine startups can survive and thrive under renewed regulation – TechCrunch

What is A Shadow Ban? (and How to Fix It)

Here’s Why You Should Consider a Career in Digital Marketing