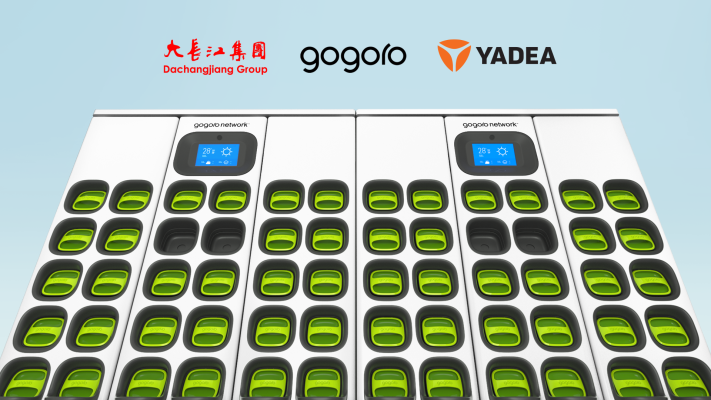 Less than a month after announcing a partnership with India’s largest two-wheeled vehicle maker, Gogoro is taking another big step in its global expansion plans. This time the market is China, where Gogoro’s technology, including its swappable smart batteries, will be used in scooters made by Dachangjiang Group (DCJ), one of the country’s biggest motorcycle makers, and Yadea, one of it top electric two-wheel companies. DCJ and Yadea will jointly invest $50 million in an operating company to develop new two-wheel vehicles with their own branding that use the Gogoro Network, including its batteries, drivetrains, controllers and other components.

“Think of it as DCJ and Yadea combining to create an AT&T,” Gogoro co-founder and chief executive officer Horace Luke told TC. “Gogoro will be the technology that powers them, so think about it like we’re the Ericsson.”

Last month, Gogoro and Hero MotoCorp announced a strategic partnership to build a battery-swapping network and electric two-wheeled vehicles in India. Gogoro’s new deals in India and China are the biggest steps it has taken for its global strategy since launching the first Gogoro Smartscooter in 2015.

Gogoro’s swappable batteries, its signature technology, means riders can replace their batteries for new ones at charging stations that are small enough to fit on a sidewalk. In Taipei City, where Gogoro is based, its swapping stations are a common sight, usually tucked against storefronts or by the side of gas stations and parking lots. Since Gogoro’s batteries are swappable, electric vehicles that use them don’t need to be parked to be charged. This addresses “range anxiety,” or consumer concerns about how far an electric vehicle can go before it needs to be charged again. The main challenge is making sure there are enough swapping stations to be convenient for riders of two-wheeled vehicles powered by the Gogoro Network.

DCJ and Yadea’s joint venture will launch first in Hangzhou, its pilot city, before expanding into other cities in 2022. Vehicle availability and pricing will be announced later.

Last year, China’s government introduced new regulations that require all new cars sold by 2035 to use “new energy” instead of fossil fuel. Combined, DCJ and Yadea have 47,000 retailers, covering 358 cities, or more than half the cities in China. Luke said this means once the joint venture expands beyond Hangzhou, it will be able to grow quickly.

Gogoro positions itself as a turnkey solution for other electric mobility companies, and its own brand was a way to develop its charging infrastructure and reputation. In Taiwan, where Gogoro-powered two-wheeled vehicles now account for nearly a quarter of monthly sales, its swappable batteries were first used in Gogoro Smartscooters before the technology was licensed to other makers like Kymco, Yamaha and Aeon.

“It was almost like a roundabout way to prove that the platform is feasible,” said Luke. “We had to build our own vehicles, our own retail chain and now we support 400,000 customers and 2,000 stations. That proof case enabled us to work with these larger partners, so when they asked us to pull up data, we could show them the unit economics, durability, stations and how it works. It took many years, but we were getting ready in the biggest way possible.”

Yadea sold more than 10 million electric two-wheelers in 2020, but wanted an alternative to lithium-ion batteries, he added. Along with Aima, Yadea is one of the best-known affordable electric two-wheeler brands in China, while Niu dominates the premium market.

Gogoro has raised about $480 million in funding since it was founded in 2011, with investors including HTC, Temasek Holdings and Generation Investment Management (GIM), the green-tech investment firm co-founded by former United States vice president Al Gore.

In a press statement, Gore, who is GIM’s chairman, said, “Gogoro’s partnership with Yadea and DCJ in China, which builds upon their existing work with Hero MotoCorp in India, sends a clear signal that the world’s two-wheel leaders are helping to fuel the sustainability revolution in Asia with smart battery swapping.”

OostNL backs the €18.5M Series B funding round of this Dutch biotech company that’s fighting cancer

How to run growth marketing during a recession – TechCrunch