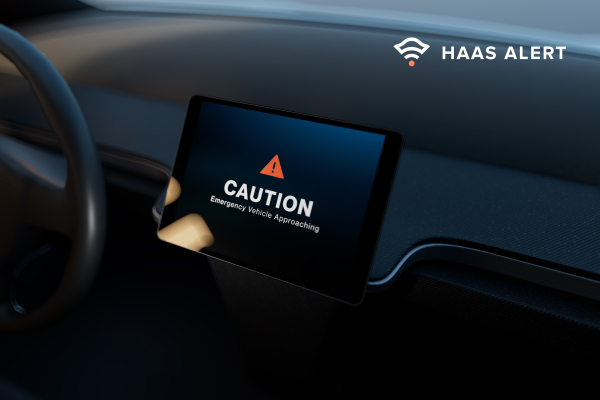 HAAS Alert, a SaaS company that provides real-time automotive collision prevention for public safety and roadway fleets, has raised $5 million in seed funding that the company says it will use to scale sales and outreach efforts and prioritize R&D with vehicle-to-vehicle and vehicle-to-infrastructure (V2X) technology partnerships.

The round was led by R^2 and Blu Ventures and joined by TechNexus, Stacked Capital, Urban Us, Techstars, Ride Ventures and Gramercy Fund.

HAAS Alert relies on cellular-based sensors to ingest roadway hazard data from the environment surrounding a vehicle, and its predictive technology to digitally alert drivers through their vehicle systems. HAAS Alert’s proprietary digital alerting system, Safety Cloud, can be found on a range of fleet vehicles in the public and private sector, from fire trucks, ambulances and police vehicles to tow trucks, construction and waste vehicles, school buses and more.

“Emergency responders, towing operators, construction and work zone crews and similar municipal fleets have extremely high death and injury rates from collisions,” Jeremy Agulnek, HAAS Alert’s senior vice president of connected vehicle, told TC. “They also really form the backbone of our communities, and every driver encounters them on the road daily. Many of these jobs are inherently risky to begin with, and yet struck-by incidents still rank as a leading cause of death for all of them.”

HAAS Alert sees advanced driver assistance systems (ADAS) and V2X as the solution, so it built its service to start with those at the highest risk on our roads, and grow from there.

“For us, this is not about using connected vehicles for entertainment and general connectivity — it is specifically about safety,” said Agulnek. “By connecting and protecting these folks, we can immediately bring a connected vehicle experience to all drivers and infrastructure in a way that also makes communities safer. We think that solving for safety with first responders and roadway workers is the most critical component to advancing mobility to the next stage.”

So far, Safety Cloud is present on vehicles in more than 750 public agencies and private organizations that have sent more than 1 billion alerts collectively.

HAAS Alert represents a growing number of startups looking to leverage V2X technology to reduce the risk of collisions, and funding is a big piece of the puzzle. Not only does the software cost money to build and keep updated, but the hardware and human-power costs associated with installing sensors, both on public infrastructure and within vehicles, aren’t cheap. HAAS Alert hopes to reach 10 billion driver safety alerts by 2022, and to do that, it’ll need to attract the automotive sector. Currently, the company works mainly with fleets, but it says the more fleets that are on its platform, the more automotive customers it will attract, and vice versa.

“We charge reasonable fees for fleet and agency customers to activate their roadway assets on Safety Cloud, and we charge a subscription fee to automotive customers to license the safety alerts, software and other services we provide,” Agulnek said.

The company says it’s actively installing its HA-5 Transponder hardware on vehicles across the nation, which allows equipped vehicles to automatically send digital alerts to approaching drivers when emergency fleets activate their flashing lights. These alerts give road users a heads up to the existence of response personnel on or near the roadway, giving drivers time to slow down or move over.

Agulnek says the hardware setup is quick and easy with minimal downtime, but fleets also have the option of integrating Safety Cloud without hardware via the vehicle’s existing CAD, GPS or telematics system.

“All that is needed to add Safety Cloud alerts to a vehicle is a software update to receive data via the vehicle’s existing telematics capabilities and display driver alerts in the infotainment screen and/or instrument cluster,” Agulnek said. “We are working on a project right now with a car manufacturer where it took less than a week to implement alerts inside their vehicles.”

Computations are done either in the cloud or on the edge of the chips inside the hardware, which means the alerting logic can reside in HAAS Alert’s cloud, in a vehicle OEM’s cloud, in the vehicle’s head unit or a hybrid multilocation architecture, according to Agulnek.

A fleet management platform, the Situational Awareness Dashboard, comes standard with the Safety Cloud and is designed to enable coordinating agencies across jurisdictions to work together. HAAS Alert also includes potential add-ons for specific industries. For example, responder-to-responder (R2R) features a set of lights attached inside a vehicle that sends notifications to responders when other Safety Cloud-equipped vehicles are in active response mode and approaching the same intersection. FleetFusion allows customers to integrate real-time data from Safety Cloud into internal dashboards, third-party applications and traffic management centers.

Entrepreneurship 101: How to retain employees?