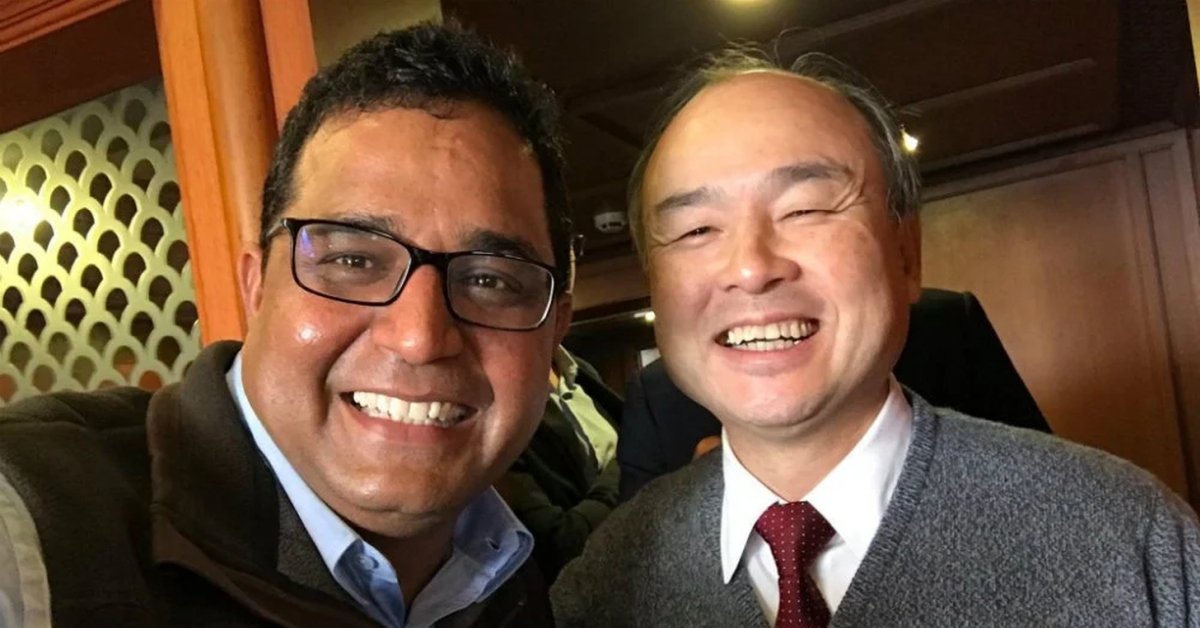 SoftBank’s $1.4 Bn investment in Paytm till date has a fair value of $800 Mn as per the Japanese VC

In November 2019, Japanese venture capital giant SoftBank had led a massive $1 Bn round in Paytm and had given Paytm a five-year deadline for an IPO. And exactly two years later, Paytm went guns blazing for India’s biggest IPO, but the past five months have seen the Paytm stock in a freefall, and the value of SoftBank’s bet has dwindled significantly.

After having sold a tiny portion of its holding in the Paytm IPO last year, SoftBank’s investment in Paytm has a fair value of $800 Mn according to the Japanese company’s annual report for FY2022, a 42% drop in value for the actual money poured into Paytm.

Overall, SoftBank invested $1.4 Bn in One97 Communications through the Vision Fund. Put simply, the markdown indicates that if SoftBank was to sell its stake in Paytm today, it values it at $800 Mn and nowhere close to the $1.4 Bn it has actually invested. But did SoftBank create this situation by forcing Paytm to accelerate its IPO plans in 2019?

In 2019, the Masayoshi Son-led conglomerate included an IPO condition in its term sheet and also said that in case Paytm is not successful in going public, SoftBank would sell its 19% stake in the company to other investors. The pressure pushed Paytm to accelerate its public listing plans.

Paytm’s timing was thought to be almost perfect, but what followed since then has been one of the worst disruptions in the stock market in many quarters — even accounting for the pandemic-induced crash in 2020.

In hindsight and given the bloodbath in the public markets throughout 2022, one can say that Paytm hurried its listing and should not have gone for an IPO without at least reaching breakeven. Yes, tech companies in the past have gone public without profits, but in Paytm’s case, the diversified business model and regulatory hurdles have complicated the fintech giant’s life as a public company.

But now Paytm is trading at less than a quarter of the IPO price, and SoftBank Vision Fund continues to hold 17.46% stake in the company. Earlier this year, Paytm founder Vijay Shekhar Sharma had said that the company would only be operationally profitable by September 2023, so profitability is still a long way away for the company.

Effectively, it put Paytm in a position where it had to IPO even when operational profitability is projected to be more than a year away

The drop in SoftBank’s investment value is another reminder that Paytm had a highly punchy valuation of $20 Bn when it went public. Paytm made its public debut at INR 1,955 in November 2021, a discount of 9% over the issue price of INR 2,150 per share. This week, it hit an all-time low of INR 511, a discount of 76% over the issue price. The company’s market cap has plummeted to INR 34,481 Cr or under $5 Bn, compared to the $20 Bn valuation that it had gone public at.

Overall in FY2022, SoftBank posted a loss of $13 Bn as many of its large bets failed to pay off, in stark contrast to last year when it had reported record profits. It has marked down its investment in Paytm amid the stock’s hammering.

Addressing the losses, CEO Son said, “In the latest quarter from December to March, compared to the previous quarters, we have made it (investments) smaller. (Our investments had) peaked in Q1 (first quarter) when we made investments of about 2 trillion yen. But in Q4 (fourth quarter) you see a huge decline compared to Q1.”

He added that SoftBank might reduce its investments by 50% or 25% in the next quarter.

However, Policybazaar stock has also fallen over the past few months. It is currently trading at INR 607 at the time of writing (May 13; 2:17 PM) in contrast to the all-time high of INR 1,470 per share. Its market cap has fallen to INR 27,271 Cr (just over $3 Bn) half of what the company had gone public at.

All Eyes On OYO

The next big challenge for SoftBank could be posed by the OYO IPO. The hospitality unicorn is looking to go public later this year, despite several notices to SEBI from competitors and other hotel bodies. OYO is considered by some as the poster child of SoftBank in India with over 46% stake in the company.

This past week, the Federation of Hotel and Restaurant Association of India (FHRAI) called on the Securities and Exchange Board of India (SEBI) to axe OYO’s IPO. The trade body cited mounting losses suffered by the hospitality players over the years as one the reasons.

“In addition to engaging in anti-competitive business practices, OYO is a company that has consistently registered losses since its inception. It may have raised a lot of money to become touted as one of India’s most promising startups, but it hasn’t done enough to manage the business on the ground as efficiently. OYO has one of the highest ESOP pools of $1.1 Bn, which too is absurd,” Gurbaxish Singh Kohli, Vice-President, FHRAI, said in a statement.

The SoftBank-backed hospitality startup recorded INR 3,943.8 Cr in losses in FY21 compared to INR 13,122.77 Cr in FY20. This was largely owed to a huge fall in expenses due to pandemic-induced lockdown.

OYO has proposed an INR 8,430 Cr ($1.2 Bn) IPO in its draft red herring prospectus, but now reports suggest hospitality major may go for a 50% lower IPO offering than what was submitted in its DRHP. SoftBank plans to sell shares worth $175 Mn in the OYO IPO.

So even as Paytm has become a big weight on SoftBank, the impact from a negative listing for OYO could be worse.

Timebank or Cryptocurrency – Which Is The Next Golden Goose?